Euromonitor International’s League and Club (including franchises) indices employ a broad range of key performance indicators to provide understanding of how leagues and clubs compare in terms of commercial attractiveness for investors and sponsors. These cover key areas such as engagement and exposure, legacy and heritage, and broader macroeconomic and social indicators. In the latest edition a dedicated COVID-19 impact metric has been introduced in order to gauge the damage suffered due to schedule disruption and attending restrictions.

September 9 marked the start of the 102nd season of the National Football League (NFL) and with this, the league expects a firm step back into normality after a heavily impacted 2020 season that has seen pre-season cancelled, games rescheduled, and attendances greatly reduced.

There are several areas where NFL outperforms its closest competitors both in the US and globally. Before the COVID-19 pandemic American football attracted the highest number of live spectators on average across all leagues globally, with 66.8 thousand attendees per game in the 2019 season. The league is also more evenly balanced competitively than many of its peers. Fans of many franchises at the start of the season know that they have a chance at winning the title, which is rare since many sports leagues are dominated by a few top teams. An important aspect to mention is that even though the pandemic has brought widescale disruption, NFL managed to conclude the full season, avoiding cancellations or shortened schedules. Finally, it has long reaped the many benefits of the juggernaut that is the US sports market. Leagues and teams based in the US rely on both the size and strength of the US economy and US fans’ willingness to spend a sizable portion of their disposable income on leisure and recreation. In many cases this is what widens the margin in the League Index between the NFL and other major international leagues.

Source: Euromonitor International’s The League Index 2021: How the Sports Industry is Emerging from the Pandemic report 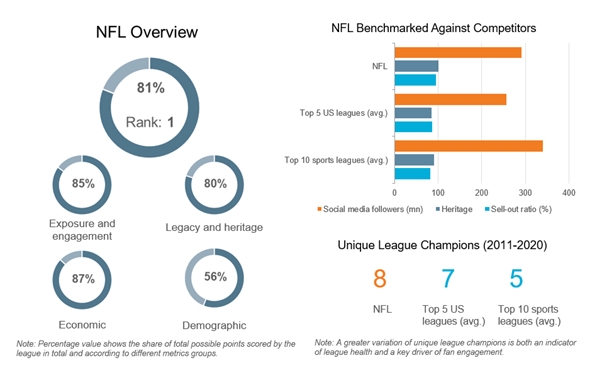 Source: Euromonitor International’s The League Index 2021: How The Sports Industry is Emerging from the Pandemic

Quest for global acknowledgment on the cards for NFL

While an undeniable powerhouse in the US, globally NFL has a few big questions to answer. First and foremost, a traditional scepticism towards American football outside North America (and a few other markets) needs to be tackled. Numbers of NFL social media followers - a proxy of the global fanbase - are significantly lower compared to competitions such as Premier League, Spanish La Liga or NBA. This season, after a one year hiatus, the league continues its long term tradition of NFL International Series with London hosting two games in October. Recently, plans to expand into mainland Europe and to organise regular season games in Germany have also surfaced with a number of cities expressing desire to host games in the country. In the next year expect the NFL to continue to dominate the US sports landscape but also make greater in-roads into international markets that are becoming more receptive to the game.

To learn more about Euromonitor’s League Index, access the report The League Index 2021: How the Sports Industry is Emerging from the Pandemic.

FIFA World Cup 2022 in Qatar: Raising a Drink, From a Dry Nation to the World

European Rail: An Emerging Model For Sustainable Travel and Commerce

Rail is in the spotlight, attracting investment in the wake of pandemic-driven disruption in air travel and accelerating support for sustainable development…

The Coronavirus (COVID-19) pandemic has devastated the global foodservice industry in the short term, while radically accelerating existing trends. Surging…