As 2014 marches on to its conclusion, thoughts are already turning to the economic outlook for next year. Risks to the outlook have increased throughout this year, but as expected back in January, developed economies taken as whole have seen their growth strengthen, whilst emerging and developing economies taken as a whole have seen their growth weaken over 2013. Notable exceptions are present of course – including India on the upside – which has benefitted from the Modi effect which has boosted confidence and the USA on the downside whose weather-related Q1 slowdown has dampened growth on an annual basis and has led to its forecast real GDP growth in 2014 remaining broadly stable over 2013 at 2.1

An uncertain outlook for the economy

We are currently expecting stronger growth in 2015, driven by a pick-up in major markets including the USA, the eurozone, Japan and India. We expect global real GDP growth to increase to 4.0% - the strongest rate of growth since 2011. Yet the outlook for 2015 remains clouded by a myriad of risks – notably geopolitical instability in the Middle East and Ukraine and any potential flow-on effects on commodity prices, the threat of deflation in the eurozone and persistent lowflation in advanced economies in general, tightening monetary policy in the USA, continued fears over the China slowdown, the lingering debt burden and a deepening of the ebola crisis. In one word, the outlook for 2015 can be summed up by “uncertain”. Seven years on from the financial crisis the global economic recovery remains disappointingly fragile. 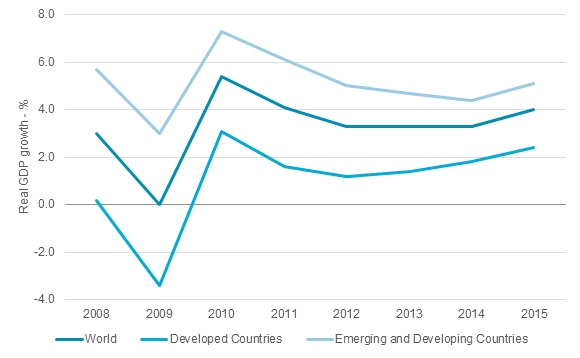 Note: Data from 2014 onwards are forecast

What does this mean for consumers?

The outlook for consumer expenditure is similarly uncertain. Currently we expect growth of 3.1% in real terms globally, an acceleration over 2014’s expected 2.3%. Yet once more risks are chiefly on the downside, and it should be noted that economic uncertainty tends to weigh heavily on consumers. An added issue is that in Europe, although nudging downwards, unemployment still remains high in many economies, quality jobs hard to find and wage growth is stagnant – even in those countries where growth has been relatively strong – for example the UK. Even in the USA, which saw strong growth in the second and third quarters, consumer expenditure has been lacklustre. 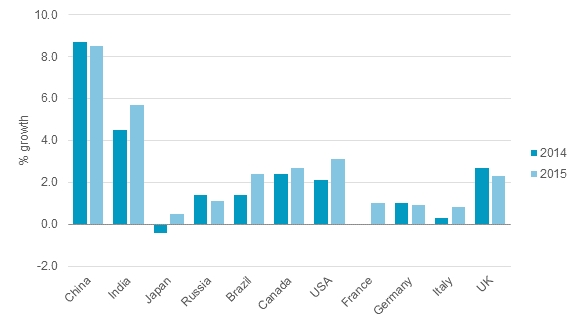 A stronger 2015 but downside risks dominate

So all-in-all 2015 looks to be stronger than 2014 but risks are on the downside – meaning any revision to the outlook is likely to be downwards rather than up. Growth prospects also continue to be uneven. At the risk of sitting on the fence, my opinion is that we should be extremely cautious about the pick-up – let’s face it, we’ve been disappointed before. To end on a more positive note, at this point, an all-out crisis does not seem likely, but 2015 should be more a case of a continued small step in the right direction with bumps along the way.