Continued economic and political instability in the world’s biggest economies is dramatically affecting the global performance of dairy, at least at first sight, with a 9% decline in retail value sales in 2015 and continued decline in 2016. Yet much of this decline is to do with currency exchange as several major currencies weakened against the US dollar, including the Euro, GBP, RUB, Real and CNY since 2015. Whilst the effects of unfavourable exchange rates should not be underestimated, at least consumers are not buying less of what they eat. On the contrary, between 2015 and 2016, retail volume of overall dairy is growing and fixing exchange rates against the dollar paints a different picture with global retail sales growth of 4% in 2016. This, in fact, is in line with overall snacks’ performance, a category once thought of as the biggest growth driver of packaged food. Consumers at last recognising dairy foods as nutritious and natural snacks is benefitting the dairy industry. As a result, many traditional snack companies are now looking to gain a foothold in dairy as a new growth generator within the health arena.

Especially in dairy developed markets where commoditised products such as milk continue to show declines, new growth is found in milk alternatives, sour milk products and flavoured milk drinks. On the one hand, fears over possible negative health consequences from consuming too much dairy gets consumers to turn to grain and nut milk products (high in protein) with staggering growth rates in the US at 9% in 2016. Indeed for some, dairy avoidance has become a mainstream lifestyle choice where brands such as Silk, Alpro and newcomer Rebel Kitchen are setting the scene. 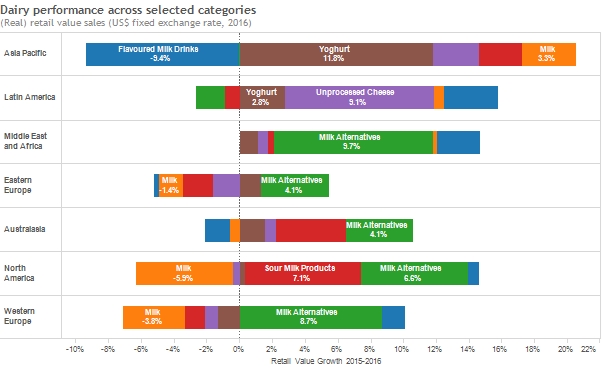 The dairy industry, predictably, has been up in arms about this shift away from dairy to alternatives and proactively advocated about milk’s excellent health benefits, and it is starting to pay off. In 2016, flavoured milk drinks and sour milk products (in which kefir is tracked) saw strong growth in an otherwise contracting market. Flavoured milk drinks lends itself well to fortification with protein and fibre, and kefir contains probiotic bacteria associated with good digestion.

Euromonitor International’s latest data shows that both milk alternatives as well as dairy products can perform well in 2016 and not necessarily take share from one another. That in turn suggests that consumers can be swayed either way and it’s the health proposition that sells.

Indeed, the war on sugar, led by the media and activist groups has somewhat dented the potential of typical sweet snacks such as confectionery, due to their reliance on sugar. This has left a big space for dairy products to exploit the snacking space as they are now (again) considered as naturally nutritious food for consumers’ snacking needs.

As explored in the global briefing redefining snacks which uses Euromonitor International packaging data to assess pack size performance, conventional snacks are losing share in favour of snack replacements, such as yoghurt. Dairy products, once seen as a staple food, have now become an obvious option for brands looking to build a ‘healthy/ier’ snack line extension

Snack companies such as Mondelez may currently think of their biggest rivals as Mars or PepsiCo but the reality is that as the blurring of categories continues and the very definition of “snacks” changes, Yili, Mengniu and Lactalis may be the real competitors of the future.

Indeed, Danone’s acquisition of WhiteWave is a clear sign of the direction of growth towards nutritious foods, a same route set out by Nestlé years back which undoubtedly will be on high alert now it further moves away from category leadership. Interestingly, this will double Danone’s presence in the US and not take the obvious route to further expansion in China.

In contrast, Bel Group, which predominately sells cheese, is now venturing outside of dairy with its acquisition of the snacking processed fruit and vegetable company MOM Groupe. After Safilait, it is the first sizeable acquisition for the group in a decade and it is in none other than the US, following the same geographical expansion route as Danone towards a stable, high margin developed market. 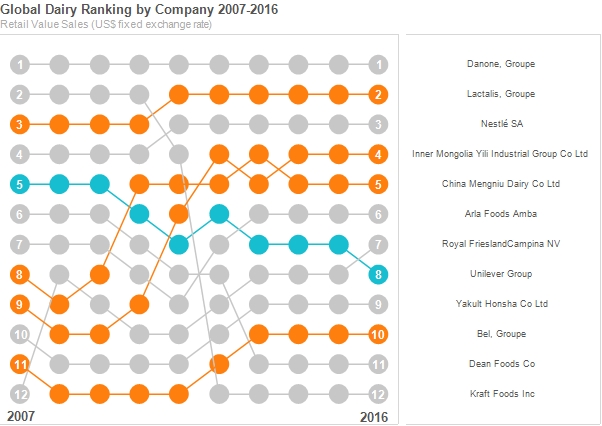 Technology to drive the next level of food innovation

Going forward, as companies look to gain a greater foothold in the world of nutritious foods and lifestyle brands, technology will be the biggest driver of food innovation. Initiatives such as the Nestlé/Samsung exploration of nutrition science and digital sensor technologies, as well as PepsiCo’s Smart water bottle advising the user when to hydrate, will steer the next level of added value (dairy) products. Whilst product formulation was once perhaps considered as the most important USP for differentiation, packaging and technology will have a bigger role to play in packaged food’s competitive landscape. After all, now technology has also enabled us to pay with a smartphone, would you rather forget your phone or your wallet?

Sustainable Eating and the Environmental Cost of Food

Rise of Plant Based Eating and Alternative Proteins: Understanding Flexitarians and Growth Trends

#whatsnextHK Disruptor: An Interview with TiNDLE

Positioning Snacks for Success in a Post-Pandemic World

Sustainable Eating and the Environmental Cost of Food

Environmental concerns over the future of the planet are changing the perspectives on food. An increasingly conscious consumer base wants products that are…

Plant-based eating and alternative proteins are on the rise. More consumers are limiting consumption of animal agriculture-derived products, and this dynamic…

The Future of Social Selling and Storytelling in Food

Social selling has become more popular and important during the Coronavirus (COVID-19) pandemic. Social commerce has advantages for both consumers and sellers…