While most other types of oils have seen their prices per litre nosedive between 2012 and 2014 in constant terms, olive oil has bucked the trend by recording a steady rise. Specific short-term factors leading to poor harvests in 2013 and 2014 in the world’s largest producer countries naturally played a strong part in hiking olive oil prices. However, other longer-term factor are at play, notably the positioning of virgin olive oil as a premium product, but also its reliance on sales in developed markets with high prices. Meanwhile, olive oil’s global per capita consumption saw a small decline since 2013, in contrast to the rise seen for less premium types of oil, which are more popular in emerging markets.

The rise in the olive oil unit price was largely the result of a sharp fall in production in the 2014/2015 season, with the International Olive Council estimating it as about a third lower than the previous year and the worst since 2000. This is largely due the olive crop in Italy having suffered from fly infestation and bacteria, while Spain’s crop was badly affected by drought. This follows a disappointing 2013/2014 season, with Greece seeing a major drop in production.

Olive oil has seen a shift towards premium products with an emphasis on provenance, with extra virgin oil from Italy in particular becoming more widely sought and recognised by consumers and marketed as such in developed markets, notably by major producers such as Deoleo with the Bertolli brand.

By comparison, rapeseed oil, soy oil and sunflower oil remained more commoditised, as reflected by their unit prices hovering between US$1.7 and US$2 per litre, and set to decline between 2013 and 2015, while olive oil is set to reach US$7.8 in 2015, up by 10% on 2013. Soy oil in particular has seen its unit price undermined by intense price competition in China, with many consumers switching to other oil products seen as healthier and more premium, such as corn oil and sunflower oil. However, while soy oil does not benefit from a premium positioning in China, consumers’ rising health awareness and their growing suspicions of genetically modified soy oil, has led to a boost in the popularity of the more expensive conventionally grown variants.

Corn oil saw major fluctuations in unit prices, reflecting the unstable prices in some of the countries with the highest per capita consumption in Latin America. 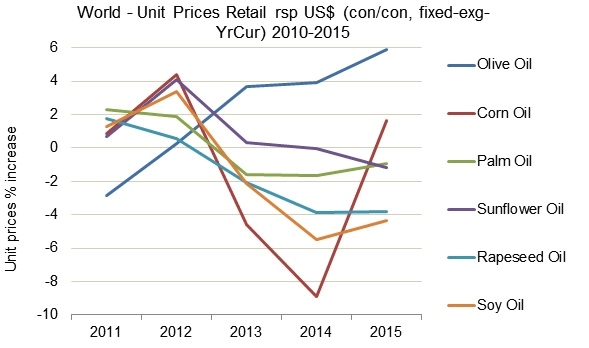 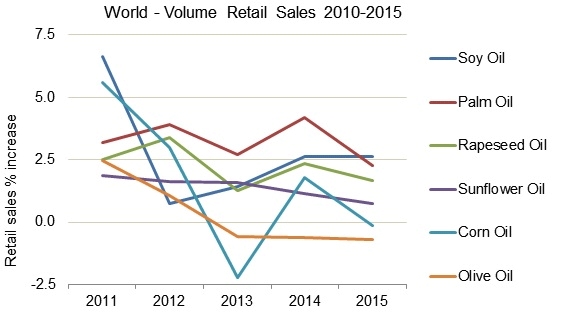 Per capita consumption of oil: olive oil loses out due to Southern Europe bias

Per capita volume consumption of olive oil, at less than 0.3 litres per head, remains modest in comparison to other types of oils, such as soy oil and sunflower oil, reaching over a litre per person.

The growth in global consumption of olive oil was undermined by the category being heavily reliant on consumption from Southern European markets facing a prolonged economic crisis or a slow recovery, including Greece, Italy, Portugal and Spain, which are predicted to account for a combined 45% of global sales in 2015. In these markets where olive oil is a staple, consumers have changed their habits in an attempt to cut their spending on olive oil, for example by buying in bulk in Italy, especially from independent small grocers, while, in Greece, household production by families is often used as a cheaper substitute to packaged olive oil sold in retail channels.

By contrast, palm oil and soy oil sales, which were the two fastest-growing oil categories in 2014 in volume sales terms, benefited from their popularity in large emerging markets to boost growth, as a growing proportion of the population became frequently exposed to retailers selling these products, particularly in urban areas. China is predicted to account for 47% of soy oil’s global volume sales in 2015, while India is set to generate 34% of the world’s palm oil sales.

While olive oil consumption remains low in China and India, the most affluent households are becoming more receptive to the health properties of olive oils compared to other types of oils, alongside being more often exposed to foreign cuisines using olive oil.

As global olive oil production remains highly dependent on olives cultivated in Southern European countries, which potentially leads to shortages and high prices, this opens the door for new producer countries to meet the growing demand for olive oil from some emerging markets. Following successful trials, authorities in the Indian state of Rajasthan announced in summer 2015 that they would allocate more land to farmers to grow olives to be used for the Raj Olive Oil brand.

Growing impetus to look beyond Europe for olive oil producers

The premium positioning of olive oil has helped producers from the EU cushion the blow from lower production levels, thanks to their high unit prices. However, they remain too dependent on their domestic markets and would benefit from targeting more aggressively the rising demand in emerging markets fuelled by interest in cuisines from Mediterranean countries and their health properties.

While other types of oils more focused on low prices will remain prevalent in emerging markets, the emergence of locally produced olive oil variants could see them sit alongside more premium ones produced in European markets and further boost olive oil consumption by targeting two main price segments.