Growth curtailed by developed market saturation; prospects stunted by socioeconomic woes in emerging markets. This is the new reality that the snacks industry face having grown by just 1.7% in retail value terms over 2015 - this represents the slowest rate of growth seen since 2008, which should concern all involved.

Confectionery, the largest sector within snacks, grew by the smallest amount at only 1% and looking deeper we can see the usual story unfold. Chocolate confectionery still delivered decent growth at 2%, but sugar confectionery sales barely registered anything positive and gum continued its decline as the chewing habit fades.

In other years, the blame would usually have fallen on North America and Western Europe. This year, however, things are a little different. The Latin American continent has been the biggest disappointment, only growing by 0.3% over 2015 largely due to sizeable economic and political woes in three of the largest snacks markets: Brazil, Argentina and Venezuela. China, the cornerstone of growth for so many years, has also faced a dramatic slowdown having contracted in 2015 and only marginally recovering in 2016. The change in the Chinese market mimics similar concerns expressed by Mondelez, Hershey and other snack giants. 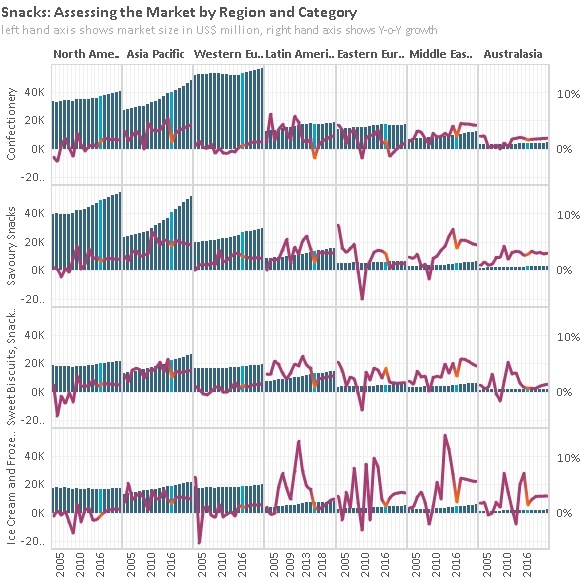 With sweet snacks such as confectionery continually linked by the media to childhood obesity and other diseases, consumers are increasingly aware of their own recommended sugar intake levels and what sweet snacks contribute to that. This has proven to be one of the biggest barriers to growth for sweet snacks categories in developed markets. The solution? Products that appear more natural to the consumer. Processed fruit snacks (for children) and fruit and nut bars (for adults) have shown that growth is still possible in developed markets. KIND bar has been labelled as a 'game changer' in the US snack bar market - as have other brands such as Nakd bar in the UK - for their clean label approach to marketing their products to consumers. 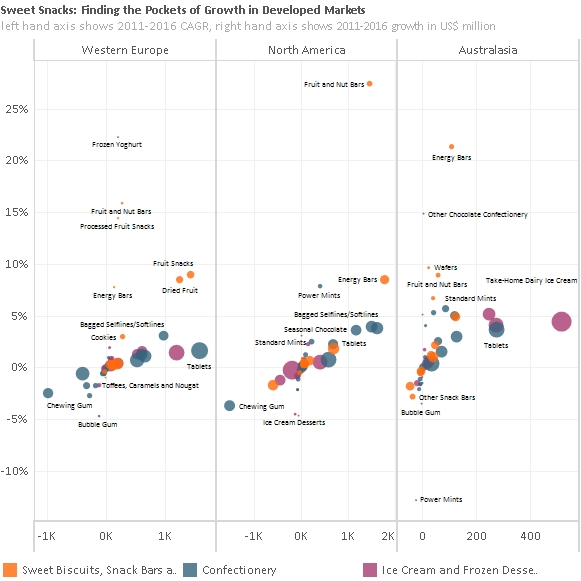 Another hot topic for the snack industry in 2016 is the notion of 'alternative snacks'; the idea of producing a snack product that is made with non-potato, non-corn ingredients. Intriguing examples over recent years have included IPS egg white chips and Calbee Harvest Snaps (known as Yushoi in the UK) which are made from pea or lentil flour. These new product launches reflect the growing desire by consumers for something 'a bit different' and snacks that are made from ingredients that are generally perceived to be healthier than the usual staples of potato and corn. Meat snacks have also featured heavily in this space, with Slim Jim from ConAgra and Jack Link's from Link Snacks Inc being two of the better performing brands. This has inspired confectionery companies such as Hershey to acquire Krave and General Mills to purchase EPIC Provisions. The longer term future for meat snacks is, however, in doubt as a dual combination of health warnings from the World Health Organisation take hold and consumers become ever more exposed to the adverse environmental impact of raising cattle.

The future for the snacks industry looks much brighter than the present, with growth expected to return to 2%+ a year from 2017 onwards. This recovery will be driven by a return to stability in Latin America and an expected rebound in growth within the Chinese market, which has been creating a considerable lag on world growth. In emerging markets, we should expect improved snacks distribution to aid growth. In developed markets, the shift towards higher end, 'naturally healthier' alternative snacks should deliver greater value for brands.

To discover more on how snacking is evolving see our recently published global briefing 'Redefining Snacks: From Conventional Snacks to Snack Replacements'.

Ready Meals: How Current Trends will Reshape the Market in the Future

Unlocking Growth in the Fast-Changing Tier II Cities in India

This briefing provides updates on Euromonitor’s December 2021 forecast restatement for the packaged food industry, deciphering how the industry is navigating…