More consumers are choosing to go on a cruise. Asked to explain the appeal of a cruise holiday, patrons praise the value of inclusive packages taking in transport, food and entertainment, helping them to budget more efficiently as well as the multi-destination experience. The cruise atmosphere is also being updated. P&O Cruises, for instance, have replaced the traditional buffet with “The Pantry” resembling an up-market food hall. More special interest cruises such as family, cultural or golf cruises are also attracting a broader demographic as are perks like wellness programmes, free childcare and adventurous on-board activities like multi-story waterslides and zip lines. New holiday packages combine cruises with more active pursuits such as the collaboration between Ramblers Worldwide Holidays and Fred Olsen Cruise Lines. Millennials and solo travellers are also blogging about their interest in more adventurous and culturally engaged trips, with cruise lines offering a more immersive cultural experience at each destination. Azamara Club Cruises offer a “Cruise Global, Eat Local” programme to please foodies, letting cruisers dine at local culinary hot spots with locals. 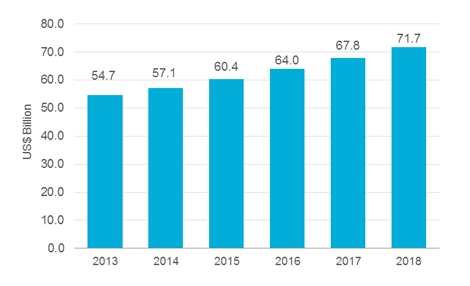 Note: Data at constant 2014 prices, retail value RSP. Data for 2015-2018 is forecast. Cruise covers domestic and international travel by cruise ship, and may include river cruises. The length of trip varies. Data includes the amount spent on the cruise package, including air fares, other transport and food and entertainment paid for in advance.

A May report from the Cruise Lines International Association showed that over one million people took a cruise in Australia in 2014, up 20.4% on 2013. Meanwhile more Chinese tourists are opting for cruise packages. According to the China Cruise and Yacht Industry Association (CCYIA), the total number of cruises from China grew at an annual rate of 14.7%, to 466, during 2014. Euromonitor International data states that cruise industry market sizes in China increased by 58.4% between 2009 and 2014, to US$8.1 billion. This month, the New Zealand Herald reported that cruises have become the fastest growing sector of the travel business in the country with travellers drawn by the combination of destinations, the freedom from packing and unpacking and the inclusive pricing.

Cruises now offer faster Wi-Fi, free on-board texting networks and RFID wristbands so cruisers can conveniently manage purchases, track luggage, notify stewards, and access cabins. Celebrity Cruises offers passengers in-room iPads to reserve on board and shore activities, while Royal Caribbean’s “Quantum of the Seas” cruise ship has a lounge with robotic bartenders. In recent years, there has been a noticeable shift to online booking. Several cruise lines have also released apps like the Amadeus CheckMyTrip, allowing potential customers to search for itineraries, ships and deals.

Sharing the passion for cruises online

The consumer interest in sharing consumption experiences online now extends to cruise holidays. Travellers can visit dedicated sites such as CruiseMates which describes itself as a “Cruise travel guide and community”.  Cruise Critic boasts that it is “the leading cruise reviews and information site which hosts the largest cruise community in the world” with five million visitors monthly who research and plan cruises and connect with other cruisers. ConsumerAffairs, a US consumer news and advocacy organization, invites visitors to review cruise companies.

Social media has helped boost the confidence of travellers who can read everything from first person accounts to recommended itineraries. Solo cruisers are also able to find fellow guests online. Cruise Critic offer a 'Roll Call' tool, which allows cruisers to communicate with other travellers taking the same cruise. Moreover, journalists are reflecting this growing consumer interest in cruises. The New York Times has a Wednesday hotel and cruise digest while USA Today has a dedicated Cruise Log.

Millennials more open to the appeal of cruise holidays

Younger cruise travellers are attracted by activities like kayaking and scuba diving and the chance to see more of the world without the hassle of planning and booking transport and a backpacker experience. They feel they can depend on the know-how of cruise itinerary planners. But the adventure starts on board. It seems as though Royal Caribbean’s new giant cruise ship “Harmony of the Seas” now being built, is firmly aimed at Millennials. It will have three multi-story waterslides, a fast internet connection, zip lines, a full-sized basketball court and rock-climbing walls. Michael Bayley, the company’s CEO, says it is aiming to strike the perfect chord with adventurous vacationers.

Solo cruise travel for the over-50s is a growing trend. In August 2015, the UK Telegraph stressed the spending power of this boomer age bracket.  Although people on cruises still tend to travel in pairs or groups, cruise companies have noticed the rise in the solo traveller despite a much maligned single supplement. A consumer study of North American cruises from the Cruise Lines International Association found that 2.4% of guests in 2014 were solo travellers, a trend driven by lifestyle changes. Adam Coulter, the UK editor of Cruise Critic explains that these may be empty nesters that have separated from their partner, or just be with someone who doesn’t want to go on a cruise. The Cruise Critic website points out that some newer, large liners are catering to the solo trend.  Norwegian Cruise Line’s Epic, Getaway and Breakaway, for instance, offer studio cabins designed and priced for solo cruisers, and access to an exclusive lounge where daily gatherings are hosted.

New frontier markets are highly dependent on tourism and lead the rebound post pandemic as consumers seek new places to explore. However, often they are at the…