For businesses, branching out into untapped markets is an important, yet imperious assignment, especially when tasked with deciphering a market’s characteristics— be it identifying competitors, market sizing or analysing labour costs. Retailers in clothing and apparel are drawn to urban areas as they concentrate populations, wealth and affluence; however, city-level data on consumer and economic trends is often hard to find, and if found, may not be cross-comparable due to varying city delimitations. Likewise, while it may be tempting to use country-level data, which is more accessible and abundant, its one-size-fits-all application in a business strategy can lead to inaccurate conclusions about a city. The paradox subsequently presents a challenge for retailers in finding trustworthy sources of information on city-specific traits — something which cannot be replicated by national or regional data. This is where Euromonitor International’s cities data and analysis is helpful. The Passport Cities database of 1,220 cities in 101 countries offers standardised city-level data across 305 indicators and can act as a useful tool in building an effective business expansion strategy. As part of a strategy briefing released earlier this year on city rankings and indices — What Does it Take to Build a Cities Index, this article uses the Indian market as an example, providing a scorecard analysis of cities based on their ability to attract luxury clothing and apparel retailers. The scorecard demonstrates the importance city-specific characteristics have in building a business strategy tailored to a particular market segment.

Whilst India has lingered in the shadows of China over the last three decades in terms of economic growth, urban consumers in the world’s second most populous country are witnessing unprecedented rises in incomes and standards of living. The resulting effect is manifesting a small, nevertheless affluent consumer base of Indians who are increasingly participating in the market for luxury clothing and apparel. Over 2012-2017, India topped growth in the designer apparel and footwear market globally, nearly doubling in size (97% growth in real terms) to USD7.6 billion. The trend is anticipated to continue as according to Euromonitor International, India will maintain its standing as the world’s fastest-growing market for luxury apparel and clothing over 2017-2022.

In light of urbanisation — a trend which is usurping the many stretches of the globe, targeting cities is indeed the logical choice — though the question is, which cities? The answer lies in assessing a mixture of city-specific consumer, household and economic indicators, which are required to evaluate the overall appeal of a city. Using seven indicators, a scorecard has been produced for 41 Indian cities seeking to evaluate their propensity for attracting luxury clothing and apparel retailers. Based on expert opinion, each indicator has been assigned a weight; the weights act as proxies for market potential, with larger weights being allocated to indicators bearing greater influence in attracting luxury retailers. The cities were split into deciles based on their rank, with points being administered as per their decile ranking, e.g. the top four cities would receive 10 points, the next four, nine points and so forth. As there are 41 cities, the final decile includes five cities. Finally, the results from each indicator were summed up and a final score was produced. Ranging from a scale of one to 10, the higher the value, the better the city is at attracting luxury apparel and clothing boutiques. 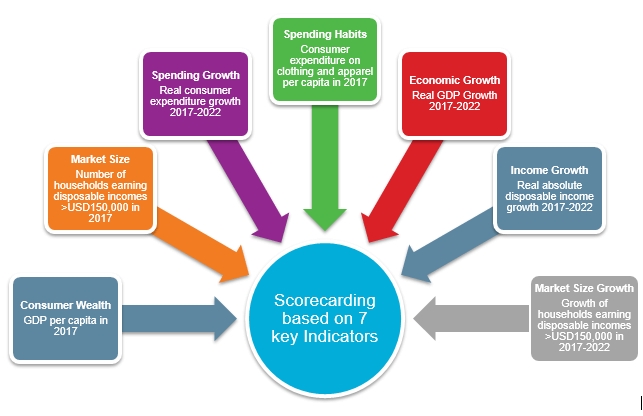 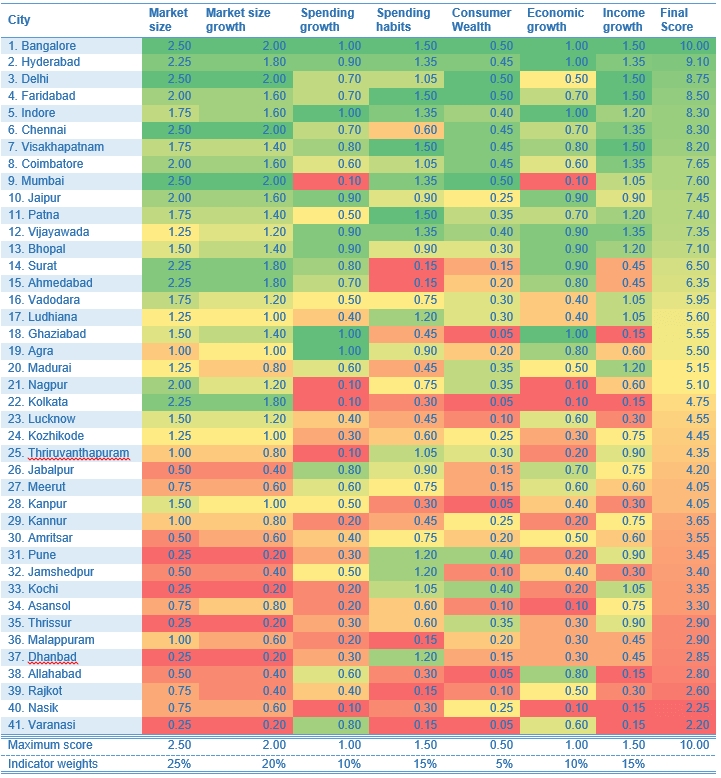 The Lure of Secondary and Tertiary Cities

Bangalore tops the scorecard with a perfect score of 10, positioning itself in a prime spot for luxury apparel and footwear. Bangalore’s affluent consumer base set it apart from other cities in the country. This is exemplified by its average per capita disposable income in 2017 which was the highest of any city in the country and even edged major cities such as Delhi and Mumbai by 12% and 48%, respectively. In second place comes Hyderabad, followed by Delhi, Faridabad, and Indore, rounding off the top five. Mumbai and Kolkata — the country’s first and third largest cities by total population, respectively, underperformed, coming ninth and 22nd in the list of 41 cities. One of the biggest drawbacks for Mumbai and Kolkata is their poor economic growth prospects in relation to other cities in the country. Over 2017-2022, GDPs of the two cities are set to grow by 28% and 29% in real terms, respectively — far behind the growth projected for Bangalore of 48%.

Delving deeper, the results also support the trend of rising secondary and tertiary cities which are becoming new potential avenues for investment. The appeal of major cities in India — more specifically Delhi and Mumbai, comes at a cost with higher average real estate prices and generally more competition from other luxury retailers. Bypassing major cities may seem like an illogical decision, though there is much reason to believe otherwise. Cities such as Bangalore, Chennai, Hyderabad, Faridabad, Indore, Coimbatore and Jaipur — all incidentally ranking in the top 10 as according to the scorecard, can bear fruit and support businesses in their endeavors to tap into a new market. Luxury retailers such as Burberry, Hermes and Gucci can be found in some or all of the following cities, namely Bangalore, Chennai and Hyderabad, which are India’s fourth, fifth and sixth largest cities by population, respectively. Though the likes of Faridabad, Indore, Coimbatore and Jaipur— despite their smaller size compared to the previously mentioned cities - are showing much promise in welcoming luxury brands. For instance, Faridabad’s per capita disposable income was the third largest of any city in India — even averaging 23% more than Mumbai’s in 2017, while Indore has shown robust consumer expenditure over 2012-2017 that is anticipated to continue through to 2022.

The analysis above is by no means an exhaustive representation of market entry. Indeed the process carries a greater variety, bringing into the fore other factors such as competition, labour costs, supply chains, and of course consumer awareness of luxury brands — elements which the scorecard analysis missed, as it mainly focused on economic and consumer affluence. Bringing in such insights could have a marked effect on the city rankings. Major cities such as Mumbai and Kolkata would predictably rise in the rankings as they already feature well-established luxury consumer markets and this would garner greater consumer awareness of this segment. This is certainly one drawback of the above-mentioned tertiary cities where consumers are less likely to have come across an international luxury brand. Such cities would likely require tailored marketing campaigns of luxury goods and services to acquaint consumers with the segment before proceeding to enter the market.

Bringing it All Together

What the analysis showed was just how much variety there is between cities in one, albeit large, country. Cities feature different industries which subsequently has a bearing on productivity, employment and wages. For instance, using two cities: Bangalore and Kolkata as examples — both are large cities, yet feature quite stark differences in consumer affluence. Bangalore has a very low unemployment rate — standing at just 1.9% in 2017, compared with 5.0% in Kolkata. This could suggest greater spending power in the former, as with higher levels of employment, the population is likely to be more affluent. Bangalore is renowned for its fledgling IT industry which has been swamped by multinational firms. This has helped lift the city’s labour productivity, reaching USD14,000 in 2017— nearly four times greater than top Kolkata’s. With great labour productivity comes greater consumer affluence and the propensity to engage in conspicuous consumption—something luxury retailers place great emphasis on.

The scorecard analysis and the example of Bangalore and Kolkata reiterated the need of finding relevant data when exploring a new market and the difficulties of taking country-level data to decipher the urban differences in affluence, consumer spending and economic growth. City level analyses cannot be bypassed or ignored in a business strategy; every effort should be made to consider the differences urban areas present for the future financial success of a budding company seeking to expand its products and services nationally and internationally.

Personal accessories sales growth slowed in 2022, due to a high inflation environment, continuing COVID-19 restrictions in China, and the impact of the war in…

The luxury industry almost recovered fully to pre-pandemic levels in 2022, as pent-up demand and a return to travel prevailed. The outlook however remains…