Rio de Janeiro is Brazil's most popular destination for tourists among the key cities of the country. The city received a total of 9.2 million tourists in 2014 (in comparison to 8.7 million in Sao Paulo and 3.8 million in Salvador) including domestic and international trips.

Out of Rio de Janeiro's total number of visitors, 1.9 million were international tourists in 2015 (up 39% from 2010). Rio de Janeiro has a relatively well diversified foreign tourist base, with Europe (41% of total arrivals in 2014), Latin America (30%) and North America (18%) accounting for the largest visitor inflows.

The city was the single Brazilian representative among the Euromonitor Top 100 City Destinations Ranking 2014. That year, the city benefitted most from the World Cup, with an increase of 46.6% in inbound arrivals, moving the city up 12 places in the ranking to 80.

This year, with the Olympics, the city is again expected to see record growth, although host cities of mega events often experience negative sentiments from residents alongside visitor displacement, with tourists avoiding the destination for the duration of the event, as was seen during the London Olympics in 2012. Fears surrounding the Zika Virus have impacted tourism in Latin America, however and the impact was beginning to be felt in Brazil as the country witnessed a fall of 2% international trips in 2015, down to 6.3 million trips.

The Olympic torch procession that started 100 days before the opening on 5 August is expected to catapult Brazil into the global spotlight, visiting every state involving 10,000 torch holders, giving the country a unique opportunity to showcase its diversity. It will also garner support for the Olympic Games in Rio and bring a country that is currently on the brink of major changes together to enjoy hosting the world.

Euromonitor International projects a best-case rise of 5% and a worst-case scenario of a 15% or more fall in arrivals to Brazil in 2016. Domestic demand is expected to be strong for the Games, and in Rio, leisure is expected to skyrocket, although business demand will be down as business travellers postpone trips over the quarter.

Tourism can often mean the difference between survival and death in some countries, and for Brazil there is still huge untapped potential over the long term, the time is now to invest and help Brazil find new ways to diversify, grow its economy, create jobs and a sustainable future from the Amazon to the Pantanal. 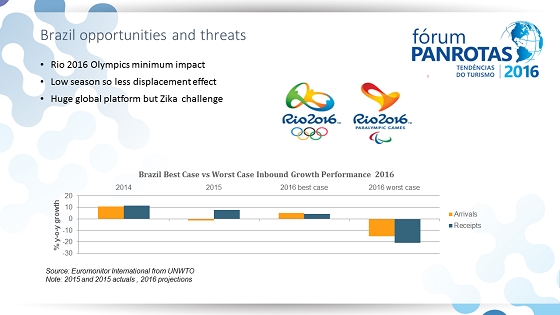