Henkel’s share in the global beauty market remained steady at nearly 2%, but the company’s share in hair care grew from 5.5% to nearly 6%. This may seem relatively small at first glance, but, considering it is the global market, is still encouraging, especially since some of the other leading players, including L’Oréal, have marginally lost share.

In early 2015, Henkel stated that the company would prioritise hair care. This a strategic move since hair care accounts for approximately half of the company’s total beauty sales. 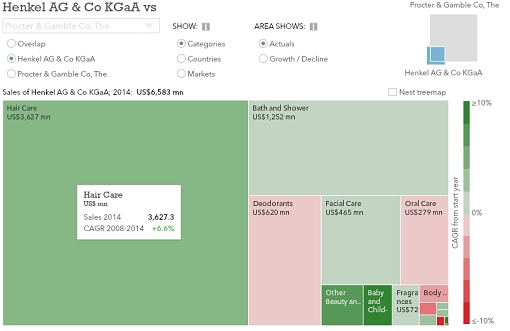 As part of its expansion strategy, the company has expanded in Asia Pacific, including China, and has been leveraging the digital platform to push sales, in addition to a number of acquisitions, including Wet Line in Latin America and Pert, Shamtu and Blendax to develop coverage in Saudi Arabia, Russia and Turkey. However, the most interesting move is expansion in the retail channel in the US hair care category through Schwarzkopf, which is one of its smaller markets in comparison to China, as shown in Figure 2. The question is how good a move is this US one and whether Henkel would have benefited from extra mileage for the amount invested if it had been in China, given the weight of the market in its beauty portfolio. 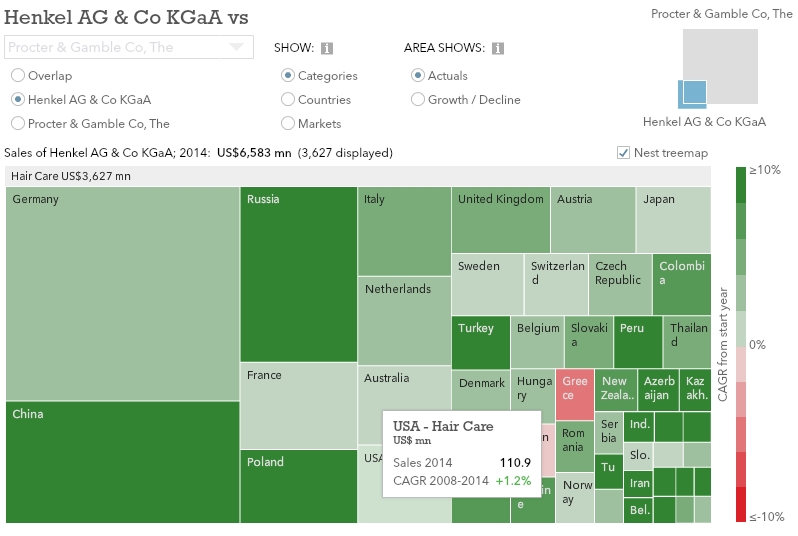 The US is expected to post the highest growth in terms of value sales in the next five years compared to Henkel’s other key markets. Absolute growth in US hair care is projected to be approximately five times that of China.

Despite the growth prospects, US hair care poses strong competitive barriers as the three leading companies, including Procter & Gamble, Unilever and L’Oréal control nearly 60% of the total market, compared to Henkel’s share of just 1% in 2015. Their strong presence mainly emerges from staple categories including shampoos and conditioners, which are not Henkel’s core hair care categories and hence potentially indicate the company has relatively lower competitive barriers in areas where it is stronger, but what is the market forecast for those categories?

Styling agents offer stronger prospects than conditioners in the US

Growth projection for colourants, Henkel’s leading beauty portfolio, is predicted to be negative, although population growth is expected to make a positive contribution. Styling agents, another core category for Henkel, is expected to have more encouraging results than colourants on a real terms retail value basis, with both population growth as well as rising prices contributing strongly to this. This potentially means that Henkel could benefit from higher margins and volume. Moreover, US styling aids are relatively price inelastic on a retail volume basis, even compared to fairly staple hair care categories like shampoo and conditioner (see figure 5 below), which means that higher prices can boost future retail value performance without overly eroding forecasted retail volumes. However, the worrying thing is the persistence of the negative habit of old users not coming back to styling agents, while any favourable impact in terms of population is pointing more towards the growing influence of the ethnic communities for categories to be driven by population growth including styling agents and colourants.

Growing influence of ethnic consumers in the US, but Henkel targets Caucasians

Between 2015 and 2020, the population categorised as non-white races is expected to increase by 13 million, compared to one million for white races. Ethnic consumers, particularly of black and Latin origins, are projected to account for nearly 70% of total population growth in the next five years. They have specific hair care needs and the strong contribution of price to the projected growth for styling agents indicates that ethnic consumers are willing to pay a higher price for the right product. On the other hand, although colourants are expected to benefit from population growth, driven by the ethnic communities, non-white consumers appear to be more price sensitive to colourants than styling agents. To benefit from the US hair care growth projection, Henkel would benefit from targeting non-white consumers with more high value sophisticated ranges for styling agents and targeted, but more price wise accessible brands for colourants, but its current offerings are designed for Caucasian consumers mostly.

Figure 6: US Population Growth by Ethnicity

While the US hair care market as a whole has stronger absolute retail value forecasts, China would be a better market on which to focus given that China's consumer preference is more compatible with Henkel's offerngs.

Colourants is expected to be the fastest-growing category, with positive contributions from all individual growth components, including income, price, population and relatively less tapped potential given consumers mostly rely on salons for colouring hair. With the introduction of easy to apply and sophisticated products, this is now slowly changing. Henkel has pioneered interesting launches, including combining care and colourants through the incorporation of essential oils as well as keratin. It was also one of the first companies to introduce hair toner to refresh shades in between usage, both of which are expected to do well in the light of the growth prospects.

Meanwhile, styling agents is expected to be driven down by factors such as increasing market maturity (within soft drivers), but, at the same time, income growth will make a positive contribution. This indicates opportunities remain for innovative added value products, given the market is now dominated by local brands. Henkel’s sophisticated ranges including stronger and longer holds and more natural finish are well suited for the market to both drive future growth and help offset pre-mature market saturation and boredom amongst Chinese consumers. This is indicated by Schwarzkopf 30 bps increase in China styling agent market share between 2014 and 2015.

One of the key points becoming obvious about Henkel’s hair care portfolio is its relatively smaller presence in shampoos and conditioners, which are expected to be the key propellants of hair care growth globally. The company has made a number of acquisitions, which will help increase its coverage in these categories, but they are mostly mass brands that improve the company’s share in emerging markets. Henkel would benefit from acquiring more premium brands in shampoos and conditioners, to help improve its prospects in developed markets such as the US. In addition, focusing on specific needs of ethnic consumers could deliver positive results for the company.