As the most watched sporting event in the world, the FIFA World Cup in Brazil will be a marketing battle for a number of consumer goods firms over June and July 2014. Two of the biggest global names, Procter & Gamble and Unilever, have Latin American footballers Lionel Messi and Neymar among their brand ambassadors, respectively. Here, I narrow my focus to various World Cup strategies adopted by personal accessories and eyewear manufacturers, as well as evaluate the possible impact on their sales.

Employing a number of online advertisements and viral video campaigns, sportswear brands Nike and adidas are dominating the corporate build-up to the 2014 World Cup. While replicas of national jerseys, shoes and footballs are big draws in terms of event-related sales, bags, watches and sunglasses are appreciable parts of both brands’ global portfolio. In 2013, personal accessories and eyewear sales for Nike and adidas exceeded US$1.5 billion and US$900 million, respectively.

National team sponsorships have enabled both Nike and adidas to launch special editions of backpacks and duffel bags, two categories in which they have a substantial consumer following. Nike sponsors the kits of Brazil, England and Portugal, among others, while adidas sponsors the national kits of Argentina, Spain and Germany. Nike also announced the first 3D-printed football duffel bag, the Rebento, just in time for the World Cup.

In the context of watches, Hublot is the official timekeeper of the 2014 FIFA World Cup and released the event’s ‘official watch’, the Hublot Big Bang Unico, in March 2014. While the watch is only available as a limited edition, Hublot’s marketing strategy has been more impressive than the product itself. 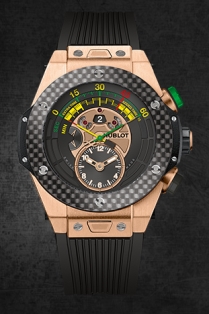 The brand’s global World Cup campaign uses the tagline “Hublot Loves Football” and has exposed it to several new markets and consumers. Hublot has also associated itself with globally recognisable football personalities, including Brazilian legend Pelé and renowned football manager José Mourinho as well as the national team managers of Brazil and Portugal. The brand will also operate a microsite during the World Cup, providing snapshots of the brand’s heritage and updates from the event itself. Another one of LVMH’s brands, Bvlgari, introduced the Octo Bi-Retro watch in May 2014, which uses the Brazilian football team’s colours of yellow, green and blue.

Among the brands discussed above, Nike and Hublot stand to benefit the most in terms of increasing consumer awareness throughout the World Cup. Although Nike and adidas’ visibility will be associated with the teams which reach the latter stages of the competition, Nike’s association with the Brazilian national team and list of brand ambassadors (discussed below) gives it the edge. Hublot, on the other hand, is well positioned to take advantage of its association with the FIFA World Cup and expand in relatively new markets such as Brazil, China, Hong Kong and Singapore.

Personal Endorsements on the Rise

Owing to the global appeal of European leagues such as the Barclays Premier League, La Liga and the UEFA Champions League, players at leading football clubs are increasingly recognisable across Asia Pacific and Africa. In addition, all the names mentioned above are virtually synonymous with their national team’s identity at the 2014 World Cup. This, in turn, allows associated brands to channel the patriotic sentiment evoked by the World Cup, providing them with an excellent platform to reach out to European and Latin American consumers through their national icons.

Depending on the popularity of football in their home markets, local brands will utilise the World Cup as a marketing opportunity to expand locally or invest in foreign markets.

Brazilian eyewear manufacturer Chilli Beans is the leading example of the first instance. The company is the second largest manufacturer of sunglasses in Brazil and is hoping to heighten brand recognition across the country through its new eyewear and watch collection, Manto Sagrado, launched specifically for the World Cup. Several local internet retailers across the world, including the FIFA website itself, are looking to tap into the excitement surrounding the World Cup as they introduce specialised costume jewellery collections.

In contrast to the companies above, a few US-based players are looking to expand operations internationally. Watches brand Ritmo has signed up three Brazilian players as brand ambassadors and may see the World Cup as the ideal platform to enter Latin America. Internet retailer Etsy, which specialises in handmade goods, is offering costume jewellery products themed on the colours of national teams due to play in the World Cup. A surprise part of this trend is the newly formed start up Glass-U, which is officially associated with the FIFA World Cup 2014 despite being established only very recently in 2012. The company is set to multiply its sales in the US and generate appreciable consumer interest, especially among the visiting tourists from around the world.

Adapting to Use a Golden Marketing Opportunity

Several global manufacturers are well positioned to take advantage of the FIFA World Cup, but those associated with renowned footballers and the leading contenders are set to reap the greatest rewards in terms of long-term revenue growth. While Nike and adidas might register unusual double-digit growth for their personal accessories sales in 2014, Hublot is unlikely to see an immediate impact on value sales. Rather, it strives to attain enduring brand recognition in key emerging markets.

The internet has emerged as the primary advertising tool for brands in 2014, and will also be a key retail channel for related personal accessories and eyewear merchandise throughout the duration of the World Cup. It is also interesting to note that several upcoming and localised brands are set to utilise the sporting spectacle to reach new consumers.

From NFTs to Body Doubles: Why Virtual Fashion is Becoming Big Business

Circular Fashion: Is Eastern Europe Ready for the Transition?

Fashion and Luxury: Winning Recovery Strategies in a Post-COVID-19 World

In this half-year (H1-2021) update briefing, we investigate the latest developments in the global luxury goods industry, with a focus on the macro-economic and…