Four and a half years after the Brexit referendum in 2016, when the United Kingdom (UK) voted to leave the European Union (EU), and with much turbulence and uncertainty during this time, the UK and the EU finally came to a Free Trade Agreement (FTA) in December 2020, just days before the end of the transition period. Major sticking points in the negotiations were centred on the issue of a level playing field to ensure fair competition, fishing rights, and how to enforce any new deal. As UK exports to the EU accounted for 45.0% of its total exports in 2020, reaching an agreement and avoiding a No-Deal Brexit was important for restoring business and consumer confidence.

This was paramount, particularly given that the final year of negotiations took place against the backdrop of the global Coronavirus (COVID-19) pandemic, with the UK economy already suffering as a result of multiple lockdowns and the highest number of deaths in Europe. Euromonitor forecasts that UK real GDP contracted by 11.3% in 2020. However, some uncertainty is expected to persist beyond the deal as fishing rights, for example, have been agreed for the next five and a half years but will then need to be renegotiated annually. The future of London’s financial centre, which is a significant contributor to GDP (7.0% in 2020), is also uncertain as financial services were not covered in the deal.

In light of these developments, Euromonitor International’s Brexit Scenarios Tool and Brexit scenarios have been retired. Our baseline for the UK already factored in a Free Trade Agreement being reached. Real GDP growth of 4.2% is forecast for 2021 in our most likely baseline scenario as the economy bounces back from the 2020 recession and consumer and business confidence return. 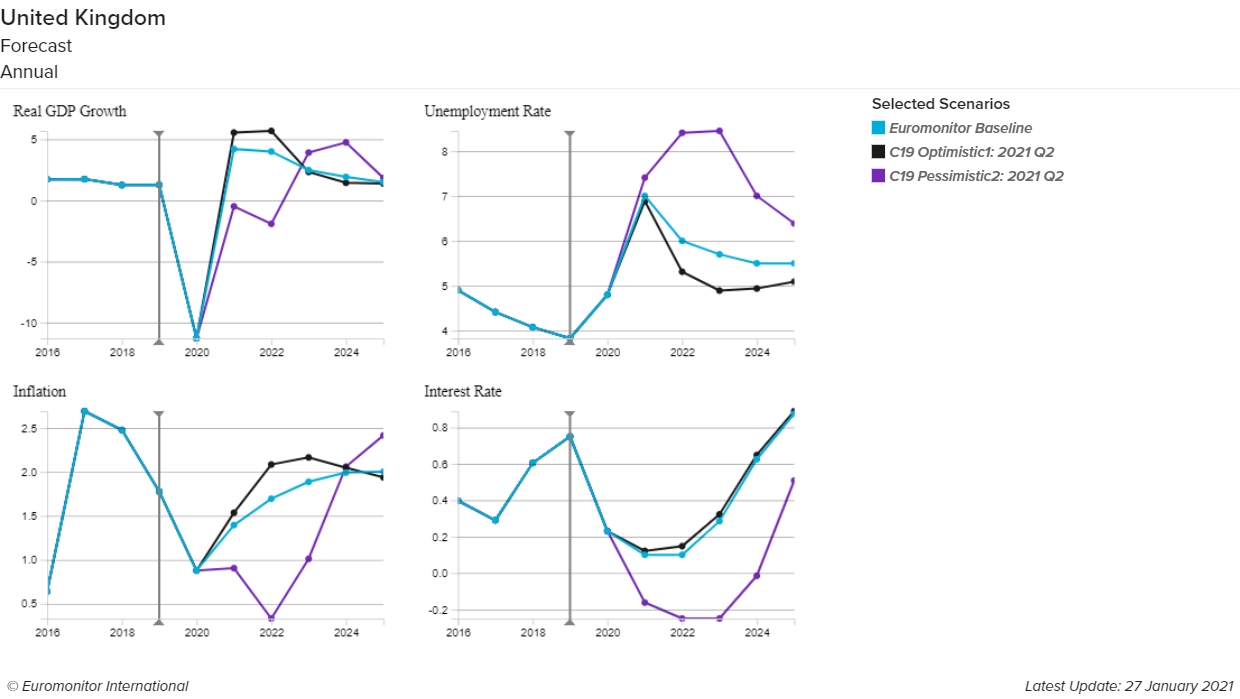 Source: Euromonitor International Macro Model. Note: The Covid-19 Optimistic1 scenarios assumes one global pandemic wave in the first half of 2021, but with faster than expected vaccination and economic recovery rates. In the COVID-19 Pessimistic2 scenario there are 3-4 global pandemic waves in 2021. The spread of more infectious virus mutations leads to more intense and longer lasting lockdowns and social distancing measures.

Economy: After a double-digit economic contraction in 2020, a free trade agreement removes most of the uncertainty surrounding future relations between the UK and the EU, which could boost investments once the pandemic slows.

Cities: The FTA between the UK and the EU did not include tariff-free cross-border exports of financial services between the two parties. This has now become a perk solely enjoyed by the remaining 27 EU members, threatening London’s dominance.

Industries: Large retailers, such as John Lewis, have halted sales to Northern Ireland over confusion, to become compliant with the new regulations, while MAC Cosmetics UK has warned of customs delays in Ireland. With large businesses struggling to align with the latest regulations, it is likely smaller businesses will have fewer resources to navigate the 12-month grace period, limiting these players’ exports to the EU. 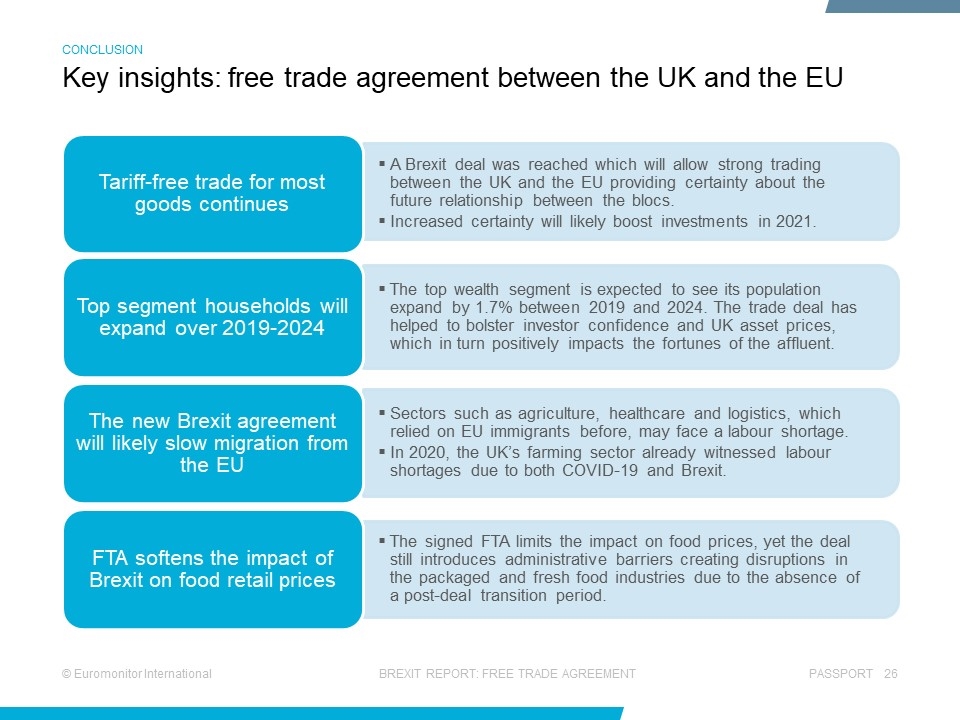