The strain of three years of Brexit uncertainty became apparent when UK real GDP contracted for the first time in seven years on a quarter-on-quarter basis in Q2 2019 (-0.2%). Another contraction in Q3 2019 will mark a technical recession, the first since the global financial crisis of 2008-2009. Boris Johnson, the United Kingdom's (UK) new Prime Minister, has hardened the Brexit rhetoric since his appointment in July 2019 with a push to leave the European Union (EU), deal or no deal, in October 2019. Yet the country remains in limbo after parliamentary clashes on the way forward and no concrete alternative to the current deal negotiated by Theresa May yet offered to the EU, although it is becoming clearer that negotiations would be centered around the idea of an “all-island” Irish economy replacing the backstop. With just weeks to go before the extended 31st October 2019 Brexit deadline and no working parliament following Mr. Johnson’s prorogation, the UK is also facing a constitutional crisis as the Supreme Court decides on the legality of the parliamentary suspension.

Despite continued divisions in government on the way forward, parliament did unite in its opposition to a No-Deal Brexit by passing an emergency bill in September 2019, forcing the Prime Minister to request an extension of Article 50 to 31st January 2020 in the absence of a deal being agreed by mid-October. It remains to be seen whether Boris Johnson will be able to strike a last-minute deal at the EU summit (17th-18th October), potentially focusing on agriculture and food products being part of an all-island economy for Ireland and Northern Ireland under EU regulations, or whether he will find a way to go against the emergency legislation by taking the country out of the EU with No Deal in October. What is more certain is that an election will take place in 2019, as the government has lost its slim majority, but opposition parties were united in only allowing this to happen once an extension of Article 50 has taken place. The EU has also voted to support an extension of Article 50 if there is a good reason, such as an election or second referendum.

The probability of our No-Deal Brexit scenarios currently stands at 40% versus 60% for some kind of Free Trade Agreement (FTA)/Customs Union or even a No Brexit.

According to Euromonitor’s Country Risk Index, a Disorderly No-Deal Brexit is the biggest risk facing the UK economy. The country has average macroeconomic risk and ranks at 24th out of 54 markets covered, much higher in risk than Germany which has a below-average risk (ranked 7th) and France which has a low risk (ranked 6th), where a eurozone Recession is the biggest risk for these economies.

Euromonitor International forecasts that in a Disorderly No-Deal scenario in Q4 2019, real GDP growth would contract by 4.0% in 2020, and inflation would reach 5.0% in 2021. However, in the event of our baseline scenario where a deal is reached via an FTA/Customs Union in line with the November 2018 agreement, real GDP growth would be 1.3% in 2020 and inflation would be on target at 2.0% in 2021. 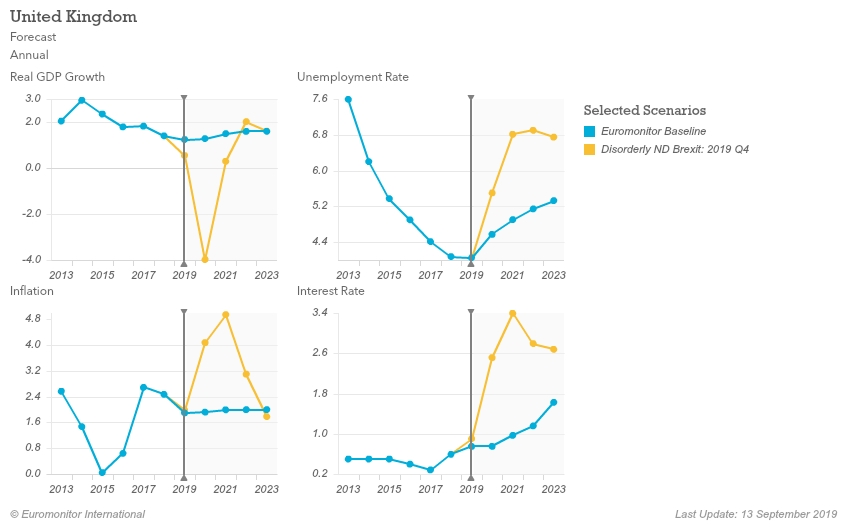 Did you know, in a No-Deal Brexit scenario:

Economy: There would be severe disruptions at the borders for one to two quarters. The level of UK real GDP will decline by 2.0-5.0% below the baseline forecast over a five-year horizon.

Consumers: The number of adults in social class E – the poorest social class – will expand by 6.0% in the scenario of a No Deal, as opposed to a forecast contraction of 1.3% in the baseline scenario.

Cities: Income inequality will worsen in Newcastle. With an export economy strictly built towards trade with the EU, a No-Deal Brexit will exacerbate the city’s poor socio-economic standing. There will be 14,500 more social class E households compared to baseline forecasts over 2018-2023, pushing more families towards poverty.

Industries: Under a No-Deal scenario, coffee sales are expected to record a loss of 127 million tonnes over the 2018-2023 period, compared to an initial 19.0% CAGR in the baseline forecast. This expected decline is correlated to the imposition of tariffs on fresh coffee imported from the EU in case of a No-Deal Brexit. 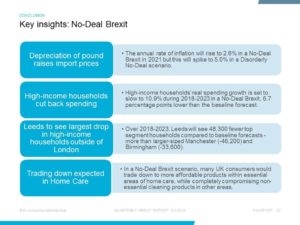 Find out more in our Quarterly Brexit Report for Q3 2019.

Euromonitor International’s Brexit Scenarios Tool helps clients to understand the impact of different scenarios on our baseline forecasts for the UK economy, industries and consumers. It offers a range of outcomes, providing the tools to stress-test strategy, plan ahead and remain profitable in these challenging times.

Head of Content Strategy, Economies and Consumers, media.eghbal@euromonitor.com or connect with her on LinkedIn.