Can Glass Displace Aluminium Cans in the Hard Seltzer Category?

It is not often remembered today, but when the hard seltzer Truly first launched in the spring of 2016, it was sold in six-packs of glass bottles.  This was not to last, and by the end of the year it had started using the slim aluminium beverage can design that was already favoured by key rival White Claw. Three years later, it was these two brands that were the driving forces behind the “White Claw Summer” in the US, when sales of hard seltzers exploded and changed the American alcoholic drinks industry forever.

The success of these two brands attracted rivals and the bipolar seltzer order quickly fell apart as every major player in beer (and even some in soft drinks) began to aggressively roll out their own seltzer options, usually modelled directly on Truly and White Claw. Store shelves were soon full of brightly-coloured cans with promises of all-natural ingredients, low calories and a refreshing taste. This therefore created a challenge for new brands trying to enter the space – how to set themselves apart from what was quickly becoming a sea of seltzer?

One area that remains virtually unexplored is alternative packaging types. New brands nearly exclusively chose cans for their seltzers. Even Topo Chico, known for glass bottles for its non-alcoholic waters, decided to go entirely with cans when it entered hard seltzers in 2020.

In Euromonitor International’s Passport Packaging data, hard seltzers are classified as a subset of the larger RTDs category. Glass bottles made up 60% of the RTDs category in 2015, the year before Truly launched and several years before hard seltzers became popular. In 2020, they accounted for just 38%, a sign that the can-based seltzers (and, increasingly, can-based pre-mixed cocktails as well) have wrested control of the category from the glass-based malt-based beverages that once ruled it. In the more emergent seltzer areas of Latin America and Western Europe the situation is very similar and nearly all major launches have been in cans. 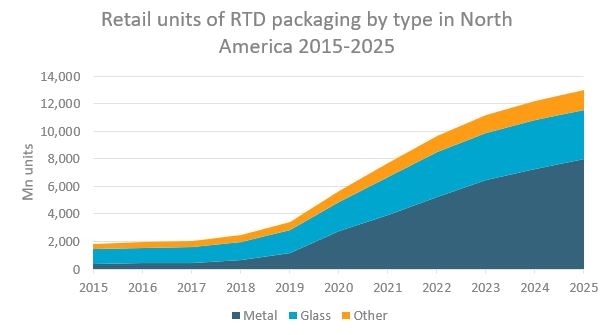 Why some seltzer occasions may go towards glass

Cans undoubtedly are well-suited for most seltzers, being light, recyclable and ideal for the casual occasions that the segment is marketed towards. But there are some reasons to believe that bottles will have a greater role to play in the future.

One is the push into foodservice. Even in North America, only about 1% of seltzer sales are projected to occur on-premise in 2021. Cans may be ideal for barbeques, but as seltzers try to push into bars and restaurants they will have to project a more premium image, at least some of the time. Asahi’s Viper, for example, made the choice to go for glass bottles when launching in the Netherlands in March 2021 in order to better appeal to consumers in restaurants, who prefer to consume beverages from glass bottles.

There is also the simple matter of differentiation. With nearly all seltzers appearing in cans and making similar claims on the label it is hard to stand out. Unusual pack types would be one way to go about that. Stone Brewing, for example, chose to go entirely with glass for the launch of its Buenavida seltzer. The brewery was in a unique position since its leadership had made strongly negative comments about the category in the past, so it needed to draw a firm line between its offering and what was previously on the market. The glass packaging is a key part of that, suggesting that a major value of glass in the seltzer space will be its ability to stand out.

Glass as part of the diversified future of seltzers

As hard seltzers mature and expand across the world they will have to change and adapt. Since 2019, the category has diversified rapidly, with new brands, flavours and attributes proliferating. Changes in packaging will be a part of that as new brands look to carve out their space in this constantly-expanding segment. Glass will likely never play a dominant role in the seltzer category, but it can be said with certainly it will play at least a significantly greater one than it does today.

Can Glass Displace Aluminium Cans in the Hard Seltzer Category?

Asia Pacific is the largest market globally for paper-based containers, and the region with the second-highest growth globally due to low per capita usage in…

Eastern Europe is the fourth biggest region in terms of rigid plastic in the world. It has been driven by the strong performance of PET bottles in bottled…

Clean Label: From Health to Transparency