Emerging Asia – which includes the economies of China, India, Indonesia, Thailand, the Philippines and Vietnam – will continue to be one of the most exciting regions among emerging markets in the next two decades, driven by a favourable demography, strong consumer class expansion, urbanisation, rapid technological adoption and digital transformation. We investigate the future economic and consumption growth of these economies and highlight the opportunities as well as challenges for businesses seeking to expand in the region.

Emerging Asia stands out as a strong performer among emerging markets

Emerging markets have achieved remarkable macroeconomic progress during the last two decades, but growth has varied significantly between countries. China, for example, has seen a huge rise in economic power, while the performances of some other key emerging economies, such as Brazil and Russia, have been below expectations. Structural weaknesses, governance issues and the end of a commodity boom are among various factors that have held back some emerging markets. With most emerging economies still having an income level less than half of the average for advanced economies, the catch-up process remains relatively long-term for emerging markets. 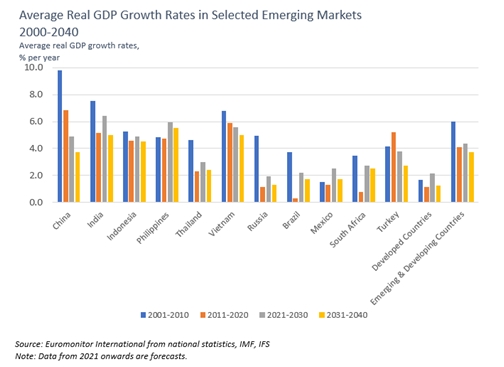 Emerging Asia has outperformed other emerging markets during the last two decades, with China, India and Vietnam achieving annual average real GDP growth of above 6% between 2000 and 2020. Despite their huge success, emerging Asian economies had lost some growth momentum even before the COVID-19 pandemic, as a result of slowdowns in global trade and investment, the shift towards less labour-intensive and more tech-intensive manufacturing, as well as waning productivity growth as these economies moved up the income ladder. The road for emerging Asia to catch up with advanced economies remains long, while the pandemic has added new challenges and exacerbated some of the pre-pandemic concerns, including infrastructure bottlenecks and rising inequality. However, we expect the long-term outlook to remain positive for the region, as emerging Asian economies now focus on transforming, rebuilding and regaining their growth momentum. Between 2021 and 2040, emerging Asia will contribute:

While China is set to drive the region’s ongoing economic rise, opportunities also exist in smaller emerging Asian markets, such as India, Indonesia, the Philippines, Thailand and Vietnam, given their swift economic transformation and growing consumer base.

With a strong GDP trajectory, based on robust growth drivers that will persist for the foreseeable future, especially its demographics and private consumption, Indonesia will rise further as one of the most important emerging economies globally in the decades ahead. Indonesia’s economy, if measured in PPP terms, is already among the 10 largest globally, and it is also forecast to enter the list of the top 10 economies measured in US dollar constant terms during the 2030s. 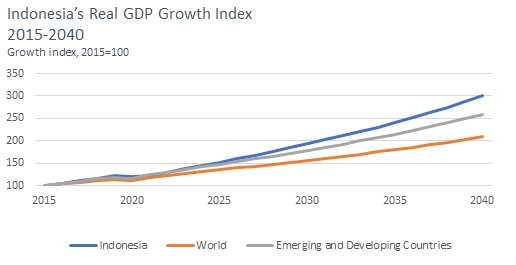 The fast-growing economy will fuel substantial growth in the Indonesian middle class, as well as long-term consumer confidence. As social and technological changes coincide, evolving consumption patterns will accelerate diversity in consumer markets across the archipelago. To capitalise on Indonesia’s future growth, one of the areas on which companies should focus is to make use of the growing influence of digital natives and the digital economy at large by linking products and services to existing digital ecosystems. These increasingly shape the daily lives of Indonesian consumers, who are savvy about and dependent on smartphones, while being open to embracing new tools and innovations. OVO, Indonesia’s home-grown digital payments application, has leveraged this opportunity and is quickly evolving to become the country’s first tech unicorn.

Vietnam’s GDP growth over 2021-2040 will be slower than in the last decades, but the economy is well-positioned to remain a strong performer. Long-term economic growth will continue to be driven by Vietnam’s strong economic fundamentals: promising demographics, a strong export manufacturing sector, and the country’s potential to become the next production powerhouse in Asia. Vietnam had already gained a position as a preferred destination for offshore manufacturing even before the COVID-19 pandemic. Now, as the pandemic-induced disruption to global supply chains has accelerated the exodus of manufacturing from China, Vietnam stands to benefit from this trend even more, and has a good opportunity to attract FDI and enhance its manufacturing power. Samsung Electronics, for example, is relocating more of its production from China to Vietnam to boost efficiency and avoid geopolitical risks between China and the US. Several new trade agreements, including the Regional Comprehensive Economic Partnership (RCEP) signed in 2020, will also help boost Vietnam’s footprint in regional and global value chains. 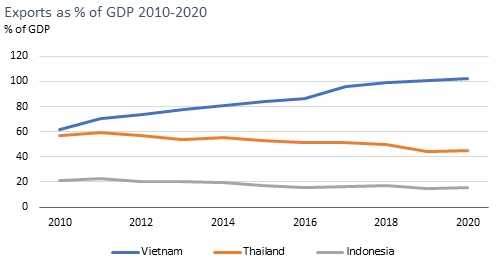 For more analysis on China, India, Indonesia, Vietnam, Thailand and the Philippines, please read our full report The Future of Emerging Asia.