Euromonitor International’s recent webinar Global Economy 2023 discussed the outlook for the global economy. After a turbulent 2022, forecasts are for the global economy to slow further to 2.3% real growth in 2023, as global financial conditions tighten and the cost-of-living and energy crises persist. Recession risks loom larger in advanced markets, but some economies in Asia Pacific and the Middle East will continue to provide some bright spots.

Euromonitor International has received a significant number of questions, not all of which could be addressed during the live Q&A session. Some of the highlights are provided below.

The war in Ukraine and US-China tensions pose the most significant risks to the global economy in 2023 and beyond. Russia’s invasion of Ukraine has rapidly inflated energy and food prices, leading to cost issues for businesses and soaring living costs for consumers in 2022. With de-escalation unlikely in the short term, uncertainty, a broadening of the war and its consequences, particularly on the global commodity markets, will remain this year.

Escalating tensions between the US and China, the two largest economies, could have a profound impact on international trade, thereby potentially transforming the global operating environment and disrupting business operations and supply chains. The main geopolitical risk is China’s potential invasion of Taiwan, which has already led to deteriorating trade relations and declining business confidence among China’s trade partners. This in turn has sparked a supply chain reorientation that is expected to accelerate, with considerable implications for the structure of the global economy.

2. How long will the current global economic downturn last? Compare it with the 2008/2009 Global Financial Crisis

The 2008-2009 Global Financial Crisis led to a global recession in 2009, as the US housing bubble burst and capital shortages triggered a banking crisis that spread beyond the US. Now, the drivers behind the current economic downturn that has started since Russia’s invasion of Ukraine in early 2022 are more multifaceted, which significantly increases the uncertainty surrounding its severity and duration. The war in Ukraine has exacerbated global energy shortages that began in the aftermath of the COVID-19 pandemic, with Europe at the centre, resulting in multi-decade high inflation and widespread pessimism.

After the onset of the 2008/2009 Global Financial Crisis, coordinated fiscal policies among the Group of Twenty (G20) helped mitigate the impact on the global economy. In addition, China’s rapid economic rebound in 2009-2010 provided an anchor for a troubled global economy. The current supply-side driven crisis leaves policymakers with fewer mechanisms and tools to counter the downturn. Instead, central banks have rapidly raised interest rates to tame inflation, which in turn has a slowing effect on economic activity. Furthermore, China is far less of a global support, given its slowing economy amid an ongoing pandemic and real estate crisis.

However, compared to the Global Financial Crisis, key economic indicators in advanced economies, including employment, consumer strength, the housing market and industrial production, have thus far remained more resilient. Overall, the potential of worsening stagflation and additional supply shocks can raise the risk of a prolonged slowdown for the global economy.

3. How have energy prices contributed to consumer price inflation in Europe?

Despite having the lowest weight in the Harmonised Index of Consumer Prices (HICP) basket - a measure of consumer price inflation in the eurozone - energy has been the largest contributor to inflation in the euro area since April 2021, as oil and gas prices surge, first due to the post-pandemic global economic recovery, and then supply shocks coming from Russia’s invasion of Ukraine. For example, in November 2022, the energy component (including electricity, gas, fuels for personal transport equipment and other fuels) contributed 3.8 percentage points to total annual inflation of 10.1% in the eurozone, compared to 2.8 percentage points by food and 1.8 percentage points by services, according to Eurostat. 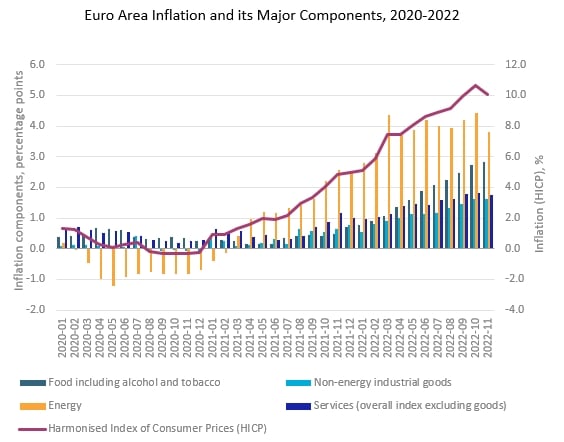 4. What could be the impact of recent COVID-19 policy changes in China?

An abrupt and sooner-than-expected overhaul of the zero-COVID strategy has made China’s economic outlook very uncertain. The country’s economy is expected to witness a bumpy road ahead in the coming months, followed by a projected rebound later in 2023.

Given relatively low booster vaccination rates among the vulnerable, older population and comparatively weaker effectiveness of domestic vaccines, a sudden removal of COVID-19 curbs will likely lead to a strong infection surge in the short term. As a result, a COVID-19 outbreak is expected to disrupt and dampen economic activities in China in Q1 2023 before the situation improves from Q2. A cautious recovery is also expected for the travel sector with a sharp increase in international travel to and from China in spring/summer 2023. Overall, faltering demand from the US, Europe and other slowing economies, as well as China’s persistent property sector problems, also pose downside risks for the latter’s economic outlook in 2023.

5. Which sectors will support strong economic growth in India?

In the near term, contact-intensive industries, including foodservice, hospitality, retail trade, healthcare, education and travel are projected to maintain a robust post-pandemic rebound and support economic growth in India. In the medium term, substantial investments in infrastructure will continue to support construction activities, increase the competitiveness of India’s manufacturing sector and support expansion of transportation services. Meanwhile, a state initiative – Production Linked Incentive (PLI) Scheme – is expected to help attract investment and promote advanced, high-tech manufacturing across key industries, such as electronics, transport equipment, chemicals, pharmaceuticals and renewable energy.

After a brief recovery in Q1 2022, global foreign direct investment (FDI) flows have been on a downward trajectory since Q2 as ongoing uncertainty, inflation, geopolitical risks and recession risk undermine investor sentiment. This downward trend is expected to continue in 2023, given the persistent global economic headwinds. However, some economies, including those in Latin America and the Association of Southeast Asian Nations (ASEAN), could see rather resilient FDI inflows as multinational companies try to diversify supply chains and move parts of their operation to these countries.

Post-pandemic global trade witnessed another strong growth driver in 2022 as supply chain issues eased and pent-up demand was released. For 2023, however, the outlook is increasingly bleak as high energy prices, rising interest rates, a strong dollar and economic slowdown are expected to curb global demand and therefore trade flows.

7. Which industries are expected to win or lose from the current global economic slowdown?

Growth across industries will be uneven in 2023. Industries with high energy intensity (chemicals, metals, mineral products) or highly reliant on investment demand will be hit hard, given the ongoing high energy prices, uncertainty and higher interest rates. Food and beverages, as well as pharmaceuticals, are expected to see more sustained growth, mainly benefitting from the stable demand from consumers. The high-tech goods industry can benefit from the strong move to digitalisation and a transition to green energy.