A record total of 210 million passengers transited through the five major airports of the Greater Bay Area in 2018, located within a mere 80 kilometres radius from each other. More than 1.4 million aircraft movements took place during that year.

With outbound travel from Asia-Pacific countries expected to grow by 40% over the next five years, each of these airports has its own expansion plans. Hong Kong International Airport (HKIA), which is running close to full capacity, is working on a third runway which it aims to complete by 2025.

With all these facts at hand, it is becoming clear that inter-airport coordination within the Greater Bay Area will be key to manage efficiently the growth in air traffic. The question is: Will all key stakeholders manage to define the fine line between competition and cooperation? 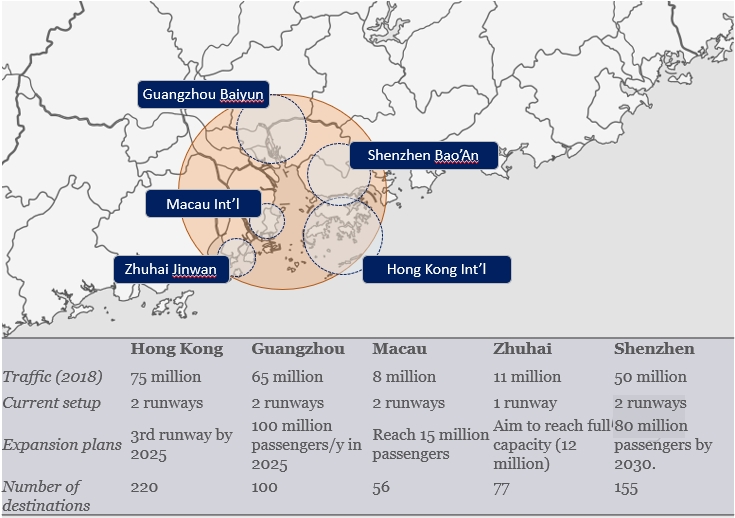 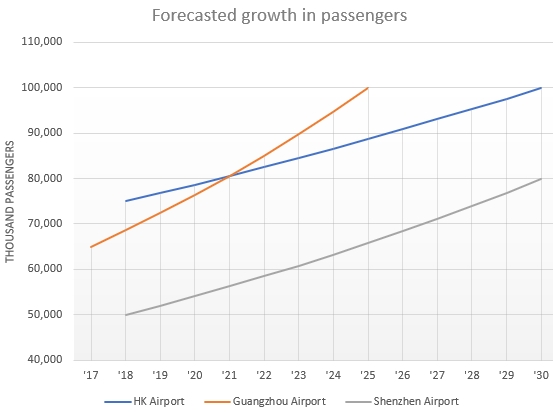 While all five airports are geographically close, not all are vying for the same positioning. Guangzhou, Shenzhen and Hong Kong are all three aiming to become major regional hubs, whereas Macau and Zhuhai, with the smaller size of their operations and flights focused on South-East Asia, do not share the same scale of ambition.

Due to their natural proximity, all five airports are vying at least in part for the same passengers. Competition has therefore naturally intensified over the last several years, with each airport taking steps to attract passenger traffic. On 1 May 2019, the Guangdong province granted both the airports of Guangzhou and Shenzhen visa exemption policies for foreigners transiting through their airports for a period of up to 144 hours. The Hong Kong Airport Authority on the other hand is aiming to double the number of remote check-in facilities within the Greater Bay Area by 2025 in an effort to attract mainland Chinese tourists to transit through the airport.

Although all three airports have historically served different markets (Shenzhen has always had a large share of connections with Chinese cities, while Hong Kong has been more orientated towards international destinations), this is also starting to change. Over the last year and a half, Shenzhen Airport has opened close to 20 new international routes, including Brussels, Rome, Dubai and Johannesburg. Similarly, Guangzhou Airport announced in June 2018 that it was planning on opening more than 30 new international routes to Europe and America over the coming three years.

Despite the intensifying competition, airports will also need to start looking at cooperation opportunities. The rise in air traffic over such a small geographical area brings about numerous inefficiencies and complexities.

Firstly, the duplication of routes brings about inefficiencies in terms of passenger load as well as fuel utilisation. On any given day there are a total of 71 flights for Bangkok departing from either Hong Kong, Guangzhou, Shenzhen or Macau.

Secondly, with the increasing number of aircraft simultaneously in the air, air traffic management has also become more complex, causing increasing risks of flight delays. One example of a successful cooperation is the one regarding Zhuhai Airport, which has been jointly managed with the Hong Kong Airport Authority since 2006.

Connectivity can also be enhanced in a mutually beneficial way by intermodal transport connecting the various airports.. In April 2019, a new direct ferry route launched connecting Shenzhen Airport and Zhuhai Airport, the first of its kind.

The Hong Kong – Macau – Zhuhai Bridge, along with the High Speed Rail connecting Hong Kong, Shenzhen and Guangzhou, are other examples of enhanced connectivity which are transforming the Greater Bay Area into an intra-connected mega-hub rather than competing sub-regions.

Unified check-in systems, such as a unique QR-codes which would be valid throughout the journey within the GBA, are another way currently being explored to make the travel journeys seamless.

Healthy competition along with increased cooperation will be key

In order to thrive, the region will need to find the right balance between promoting healthy competition and innovation, while at the same time enhancing cooperating and connectivity between airports. One city that the region can take inspiration from is London, where six different airports operate within a 50km radius, handling a cumulative 180 million passengers in 2018. 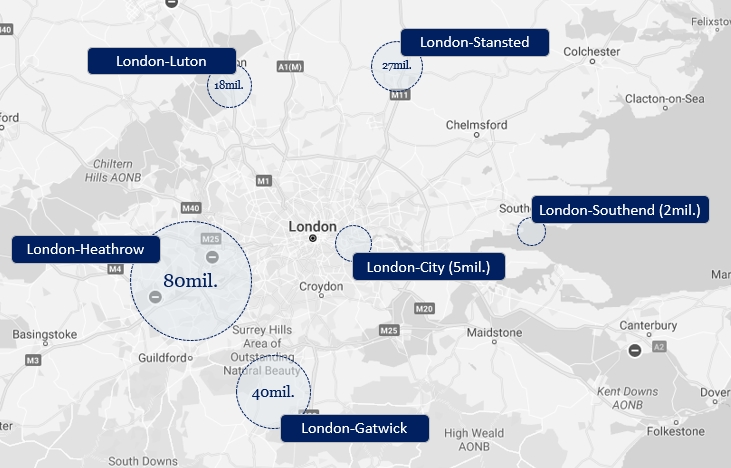 One of the keys to the successful coordination of these airports is that each of them has a designated function. Heathrow, as the busiest airport in Europe, functions as the primary airport and as a major point of transit for global, trans-Atlantic connecting flights. Gatwick on the other hand is predominantly focused on point-to-point flights within Europe, while Stansted is popular for having the largest share of low-cost flights. Finally, London-City, with its central location in the heart of the City, is geared mostly towards business travellers.

Although the Greater Bay Area’s situation is far from identical to London’s, especially given its distinct territories, the similarities in terms of volume of traffic and geographical concentration of airports make it an interesting case study.

One area where the London model could be copied is in defining a clear purpose for each airport. One airport could take on the role of “entry door” to the region, while others could act as a link with the increasing number of regional airports.

Smaller airports could focus on more niche markets such as business jets and chartered flights. As air traffic increases over the coming years, collaboration between all key stakeholders will be key to ensuring prosperous growth for the region as a whole. However, authorities will also need to ensure that healthy competition is not stifled, and that the pace of innovation continues, bringing more choice and driving down costs for the end consumer.