Unilever Spin-Off Ekaterra and the New Landscape of Global Tea

The newly-formed tea company Ekaterra, created from Unilever’s divestment of the majority of its global tea holdings, inherited the title of the world’s unrivalled market leader in loose and bagged tea from the outset. Even without operations in India, Indonesia, or Nepal (which are being retained by Unilever for organisational reasons), Ekaterra will reach annual sales of over USD3.6 billion annually through retail alone.

Despite its wide lead over any of its competitors, Unilever has struggled in the tea space in recent years as global tea-drinking habits are shifting away from its core mass black tea bag brands, while local competition has proved challenging in many key markets. Therefore, whilst Ekaterra will benefit from a tighter focus on tea than was possible when it was part of Unilever’s sprawling consumer goods holdings, it will also have to address many of the same challenges as its predecessor. How it decides to respond will help set the tone for the global tea market for years to come.

The pyramid that defines global tea 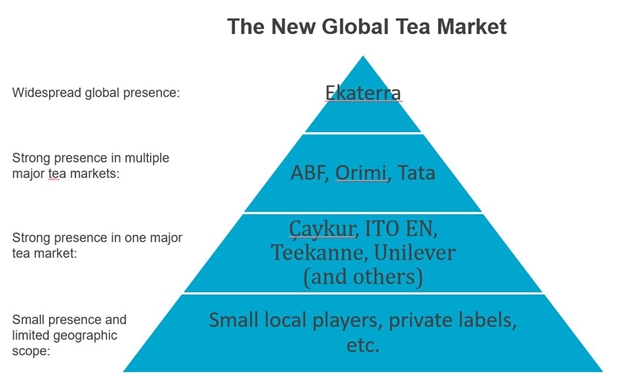 The global tea market is essentially shaped like a pyramid. Ekaterra sits on top, with approximately USD3.6 billion in annual sales - one tenth of the total global tea market. Below it sit three significant competitors, each with just over USD1 billion in total sales and a strong regional presence, although they are dwarfed by Ekaterra at a global level. Associated British Foods, owner of Twinings, has the widest geographic scope of the three and will therefore be Ekaterra’s key rival. Tata Consumer Products has historically been a major competitor to Unilever but will be less so for Ekaterra because the latter will not be inheriting Unilever’s operations in India. Markets such as the UK, however, will see significant Ekaterra/Tata competition. Finally, Orimi Trade (if Greenfield sales are included) is a dominant force in the large tea markets of Russia and the CIS but is virtually unknown elsewhere in the world.

All have a similar outlook to Ekaterra, with black tea bags as their core focus but a strong interest in branching out into other categories. This will mean that Ekaterra will frequently find itself in competition with at least one of these players, regardless of the territory. This rivalry will therefore be a defining feature of the competitive landscape within global tea in the years ahead.

A number of smaller entities exist at a level below these major four players; while they hold a limited global presence, they enjoy commanding positions in one or more important tea markets. This includes Çaykur in Turkey, Teekanne in Central Europe, ITO EN in East Asia, and even Unilever; the latter’s residual operations in South Asia will mean that it will remain the world’s fourth-largest tea company with over USD800 million in annual sales. As Ekaterra pushes into more developing countries to capture emerging growth opportunities, it will encounter many of these powerful local players. Due to their diversity, Ekaterra will need to deploy a different strategy in order to effectively compete throughout the world.

In addition to inheriting the leading position of Unilever, Ekaterra will also inherit many of the challenges that initially led its parent company to seek to reduce its presence in tea. The core of this is the reality that mass-market black tea bags are in consistent decline in nearly all developed markets. Unilever saw retail sales of black tea decline by USD27 million from 2015 to 2020 in these countries, even with the benefit of a large 2020 pandemic-related retail spike in many countries. With further declining demand for black tea bags expected in all developed regions during the forecast period as tastes continue to shift, it is clear that Ekaterra will need to pivot aggressively into new areas.

This means that there are essentially two growth paths open to Ekaterra. One is a more aggressive pivot towards premium and non-traditional formats in developed markets. This will likely mean less of an emphasis on flagship brands such as Lipton and a greater focus on smaller brands such as Pukka, T2, and TAZO. In particular, it will mean capturing a larger portion of the booming herbal segment which has dominated growth in Europe and the Americas in recent years, but where Unilever struggled to gain share.

Alternatively, Ekaterra could focus more on its core competency, black tea bags, but with a new geographical focus that emphasises the developing markets where the segment continues to grow strongly. Black tea bags is therefore expected to grow globally by USD525 million by 2025 (at constant 2020 prices) even with the largest declines in developed countries. Ekaterra starts with a sizeable presence in the three most important growth markets of Russia, Pakistan, and Saudi Arabia, although in all cases it will face strong local competition. 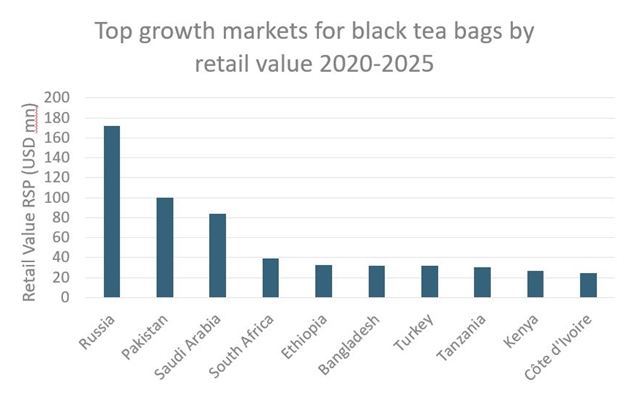 Most likely a combination of both tactics will prove to be Ekaterra’s way forward, as it attempts to maintain its global position in a highly fragmented and localised category.

This shake-up within global tea is, in many ways, not particularly significant. Ekaterra will continue to seek to find ways to avoid its reliance on black tea bags in developed markets through a combination of new categories and new geographies, in a similar strategy adopted by Unilever, although the latter experienced mixed success. This will be the case regardless of whether the new entity remains under the Unilever umbrella, becomes fully independent with an IPO, or is sold off (reports indicate three buyers remain possibilities - CVC Capital Partners, Carlyle, and a joint bid from Cinven and the Abu Dhabi Investment Authority).

Unlike coffee, where consolidation has been ongoing, tea is a category that is becoming increasingly fragmented. Regional differences in consumption patterns are strong, while local competition is fierce. The interests of a green tea drinker in China, a black tea drinker in Russia, and an herbal tea drinker in the US are vastly different and few have ever tried to address all three at the same time. Ekaterra will attempt to do just that. Success is possible, but it will prove to be a challenge.