Although Brexit has dominated the U.K. economic, investment and trade landscape since the referendum in 2016, attention is turning to future relations with economies around the world post-Brexit. For example, the EU-Japan Economic Partnership Agreement (EPA), which began in February 2019, is the world’s largest free-trade zone, covering 28.0% of global GDP and 637 million people, but this will no longer apply to trade with the U.K. in the event of a No-Deal Brexit.

Similarly, the U.K. will be keen to maintain a special relationship with the U.S., its top single export destination. The economic future of the U.K. remains uncertain until Brexit is resolved, but other factors such as an ageing population and weak productivity weigh on its longer-term growth potential. However, positives include a large, tech-savvy and diverse consumer base, an educated population, a flexible labour market and government spending on infrastructure.

Brexit continues to create uncertainty for the U.K.’s trade and economic future, with the appointment of Boris Johnson as Prime Minister leading to an increased risk of a No-Deal Brexit. According to Euromonitor’s Country Risk Index, a Disorderly No-Deal Brexit is the biggest risk facing the U.K. economy.

Financial Intermediation, Real Estate, Renting and Business Activities is the largest economic sector accounting for one-third of gross value added, with the City of London acting as a global financial hub. Government spending on infrastructure will support longer-term economic growth. Machinery and Electrical is the U.K.’s largest import category, supplying inputs for industrial production, and its largest export category thanks to advanced manufacturing technologies and a large industrial base. An ageing population, sizeable public debt burden and low productivity are risks to economic progress. 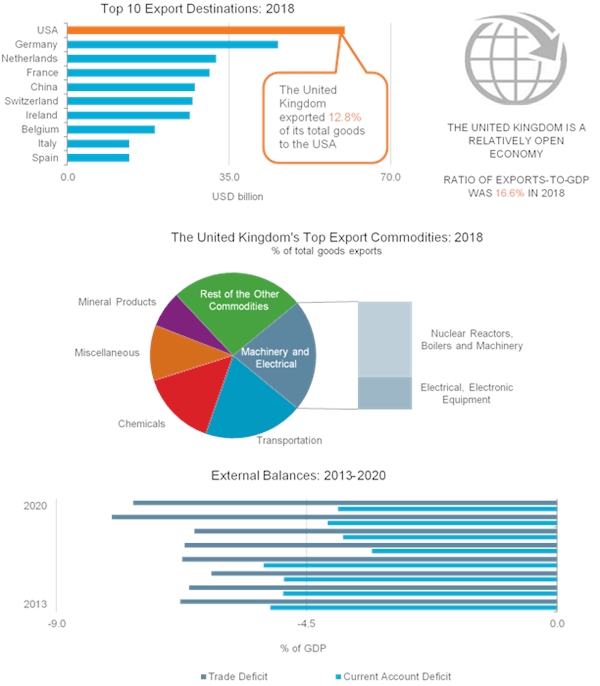 Note: Data for 2019 onwards are forecast.

The U.K.’s biggest attractions include developed infrastructure, an educated populace and a flexible labour market, but low productivity and an ageing population pose challenges. In 2019, the U.K. ranked ninth out of 190 countries in the World Bank’s Ease of Doing Business Index and benefits from the lowest corporate tax rate in the G7 and a highly developed ICT sector. Brexit-related brain drain is a risk, while the regulatory environment is uncertain and terrorism is a threat.

A large and diverse consumer base

The country will remain the third most populous country in Western Europe to 2030. The U.K. will age at a slower pace than Western Europe as relatively high levels of immigration mitigate the ageing trend to some extent. The U.K.’s population will continue to be ethnically diverse. Foreign citizens will account for nearly one in ten people by 2030 and over 86% of the population will reside in an urban area. 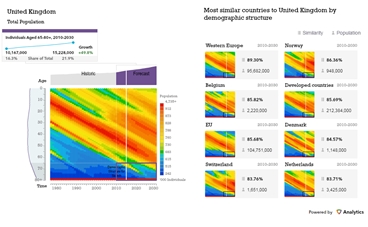 The U.K.’s median income per household is one of the highest in Western Europe but consumer spending inequality between London and other regions will widen. The lowest income class will grow the fastest until 2030. Per capita, gross income and private consumption growth will remain sluggish amid Brexit uncertainties and a weak economy.

Health goods and medical services are projected to be the best-performing spending category through to 2030, due to an ageing population and rising medical costs. In 2018, social class D - the lower-middle class - was the largest social class in the country providing great market potential for essential goods and services.

U.K. consumers believe it is important to experience new cultures

The country’s ethnic diversity means U.K. consumers are open-minded and keen to experience new cultures. While financial pressures and the uncertainty around Brexit has led to more cautious spending, they like to try new products and experiences.

Their focus is on getting long-term value from their investments; they are big bargain hunters but willing to buy fewer, higher quality and longer-lasting products and services, especially to save time and simplify their lives. Technology plays an increasingly important role here with nearly 70% of U.K. consumers using technology to improve their daily lives.

The Country Risk Index provides an estimate of the expected decline in income levels or market sizes under adverse macroeconomic conditions relative to the baseline outlook. The index can be used to rank countries by their macroeconomic riskiness and to incorporate a typical pessimistic scenario into business decisions.

The Future Demographics Model helps identify future opportunities by spotting demographic niches around the world and similar potential territories based on population patterns.