The outlook for the economy in Asia Pacific remains challenging, as the war in Ukraine lingers. This has resulted in intensified inflationary pressures and rising uncertainty. Regional real GDP growth is expected to slow significantly from a strong recovery of 6.7% in 2021 to 4.2% in 2022 and 4.7% in 2023 in Euromonitor International’s Q4 2022 baseline forecasts. As such, soft drinks is expected to take a big hit, as consumers in Asia Pacific reduce their consumption and seek cheaper alternatives.

According to Euromonitor International’s Voice of the Consumer: Lifestyles survey 2021, 21% of consumers across Asia Pacific regard value for money as a key feature in their purchases of food and beverages. This is more evident in emerging markets such as Vietnam (47%) and the Philippines (38%), where disposable incomes are lower. Traditional grocery retailers tend to offer lower prices compared with modern grocery retailers, especially in lower-income countries. This includes street-side stalls found in neighbourhoods, such as warung stores in Indonesia and sari-sari stores in the Philippines. However, with continual rises in the cost of raw materials and supply chain disruptions, traditional store owners are facing difficulty offering cheaper alternatives.

For soft drinks players, the price increases on raw materials such as PET plastic resin, and on distribution costs, has resulted in suppliers and bottlers adopting new strategies. These include creative approaches such as a flexible price/packaging mix, including new smaller pack sizes and affordable multipacks, in order to manage rising costs. However, given the prolonged inflationary pressures, this has resulted in significant cost pressures for beverage companies, and they have often had no choice but to directly increase prices. This is seen in various formats, with price increases observed for both smaller and larger SKUs, and for products in e-commerce, modern trade and on-premises channels, to pass on cost increases.

In Japan, Suntory made an announcement that it will start increasing prices from October 2022 across various channels, including vending machines. Other companies have followed suit, such as Kirin and Coca-Cola, due to continued increases in materials costs such as PET plastic resin, making announcements early to prepare consumers. Similarly, in other emerging markets, including Thailand, companies have adopted varying price strategies. Energy drinks player Osotspa has increased the price of M-150 in the 150ml pack size from THB10 to THB12, its first price adjustment in 37 years.

On the other hand, soft drinks companies have also taken steps to maintain prices in order to reduce the cost of living for consumers. For example, in Thailand, energy drinks companies such as TCP Group and Carabao launched a campaign to maintain prices at THB10 for as long as possible in early 2022. Nevertheless, this was done in tandem with product diversification, launching new products with health benefits, such as Kanzou X2, which is priced at a premium, targeting health-conscious consumers. 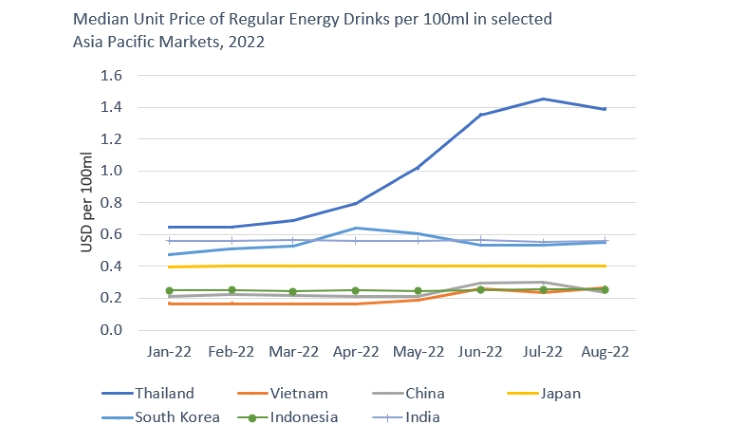 According to Euromonitor International’s Soft Drinks Price Tracker, it is observed that the median unit price movements for energy drinks saw the largest increases in Thailand (114%) and Vietnam (62%) between January and August 2022. This spike was seen by local brands such as Shark and M-150, as well as Number One, with price increases seeing a huge spike since May 2022.

This is attributed to rises in production costs in terms of transport, packaging and raw materials, in line with rising energy prices. As energy drinks are considered essential by low-income consumers for boosting energy, the price hike is set to hit them the hardest. In comparison, developed markets such as South Korea and Japan saw minimal price increases due to the lower level of inflation, as well as the ability of manufacturers to absorb rises in costs.

What to expect for the rest of the year?

The impact on consumer demand caused by an increase in prices is likely to remain minimal, as manufacturers adopt different strategies. Nevertheless, should extreme weather conditions or new variants of COVID-19 arise, inflation is set to continue to rise in the mid term. As such, we do expect consumers to down-trade, leading to a decline in consumption in discretionary soft drinks categories such as RTD tea. It is therefore important for soft drinks players to constantly innovate and adopt varying strategies to deal with inflation, in order to maintain value sales in the long term.

To learn more about how soft drinks companies have been impacted by the inflation surge, read our full report, Inflation Surge: Soft Drinks in Asia Pacific.

How Inflation is Impacting Pet Food Products in Europe

With the rise of consumer price inflation impacting almost all CPG in the world and Asia Pacific in 2022, this report seeks to examine how soft drinks companies…