Consumers are more aware and anxious about climate change and sustainability today than at any other point in history. Closed borders and mobility restrictions during the first half of 2020 were stark reminders of the human toll on the planet, as smog cleared in the skies of cities around the globe.

According to the Euromonitor Lifestyles survey, Latin America is the region that is most concerned about climate change and shows the greatest interest in generating positive change in the environment.

Pricing - a barrier and an opportunity

Price continues to be one of the biggest challenges to sustainable production in the region. Products that have a sustainable attribute (often the result of a redesign in the production process or the packaging, or external certifications such as carbon neutrality or organic production) carry an additional charge that is normally passed on to the consumer. This immediately limits (or restricts) sustainable products from achieving mass consumption in a region full of very price-sensitive consumers.

Linking these initiatives with saving money might be the only feasible way forward. "Pay for the content, not for the packaging" is a strategy often seen in home care products, as plastic packaging can result in up to 40% of the final price. Eliminating this cost not only helps a consumer’s wallet, but also promotes reusable and recyclable packaging initiatives, such as the Algramo and Unilever business model in Chile, which encourages consumers to reuse their PET bottles for liquid laundry detergent, for example.

At the same time, the pandemic has accentuated the need for immediacy and safety, which has resulted in a greater demand for single-use plastics, a trend that is partly influenced by the e-commerce and delivery boom. 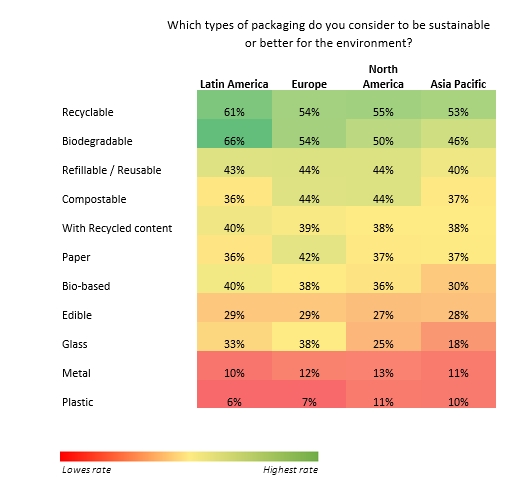 In a region where only 4.5% of waste is currently recycled (World Bank) and where one kilogram of waste is generated per capita each day (and where the projected population for 2025 is 677 million); the situation is alarming.

The circular economy: a sustainable and equitable production model that aims to end waste

Until now, we live in a consumer economy based on "extract, produce and waste", especially when it comes to plastic packaging. This form of globally standardised production has resulted in unthinkable levels of plastic waste in the oceans, resulting in a huge global problem that few want to tackle.

A way around the indiscriminate use of plastics is the circular economy, a concept that advocates the reuse of the inputs incurred and the waste generated during production. The circular economy handles waste at the beginning of a product life cycle, rather than at the end (like recycling).

Plans for the circular economy are increasingly ambitious and go beyond the packaging management that some companies have implemented. Recently, the Chilean Environment Ministry presented the “circular economy roadmap for a waste-free Chile”, which addresses all the areas that the country will eventually promote, and oversee, for sustainable and circular production for the next twenty years. These types of changes are what Latin American countries desperately need.

Partnerships for a better world: Public and private cooperation through a regulatory framework

However, while personal responsibility plays a role, change must take place at the corporate and government level. Investment in innovation and technologies for managing waste and natural resources in a sustainable way will be key to post-pandemic development.

According to Chatham House, there are currently 80 policies in the region that ban single-use plastics or that promote a circular economy. These include a packaging law in Uruguay, a “zero waste” initiative in Panama, a decarbonisation plan in Costa Rica, and the Clean Production Agreement and the Extended Producer Responsibility Law in Chile. The Circular Economy Coalition also seeks to promote the transition towards a sustainable economic system in the region.

Advances like these are essential to displacing linear economic models and forcing action from companies, many of which are already incorporating sustainability into their core business to meet consumer demands and maintain their competitive position. However, this is not an easy task if we consider that price is the primary determining factor for Latin Americans. Economic shocks such as a regional 7.5% GDP decrease in 2020 and a 12% unemployment rate further the need for cooperation between the public and private sectors.

Sustainability in Business: Capturing the Value