Earlier this week, the European Union (EU) granted the UK a Brexit “flextension” to 31 January 2020 inclusive, with the option to leave earlier if the new Brexit deal is ratified by the House of Commons. This is the third time that the Brexit date has been postponed, which was originally scheduled for 29 March 2019. As a result, Euromonitor International revised the probabilities for a No-Deal Brexit scenario down to 30% from 40%, while raising the probability of our baseline Free Trade Agreement (FTA) / Customs Union (CU) scenario up to 50% (from 31%) given the support for Prime Minister Boris Johnson’s deal by hardline Brexiteers. Furthermore, in October 2019, the House of Commons voted for the first time in support of the Brexit Withdrawal Agreement, effectively backing Brexit.

Nevertheless, Johnson has failed to take the UK out of the EU in October 2019, deal or no deal, as repeatedly promised. The Benn Act of September 2019 forced him to request an extension of Article 50 in the absence of Parliament approving a deal, despite a Saturday session on 19 October. This was an embarrassment given his “do or die” pledges to leave the EU in October and following on from the ruling in September 2019 by the UK Supreme Court that his prorogation of parliament was illegal.

The new deal is essentially the same as Theresa May’s deal but with the controversial Irish backstop element removed. Northern Ireland will be aligned to the EU for regulation of goods in an “all-island” regulatory zone for Ireland. However, Northern Ireland will be part of a UK customs territory so that it can be included in any new UK trade deals. The deal essentially places a border in the Irish Sea between Great Britain and the island of Ireland with goods to be checked at point of entry to Northern Ireland. This arrangement will be voted on by Northern Ireland every four years, with a Free Trade Agreement to be negotiated in the meantime.

Given the continued impasse in the UK Parliament and the lack of a Conservative Party majority to push through the new deal, Johnson decided to put Brexit on hold after the EU granted the extension and call a snap election. His third attempt at doing so under the Fixed-Term Parliaments Act failed on 28 October 2019 but the next day, the House of Commons did vote in favour of an election for 12 December 2019 after the Labour party put its backing behind going to the polls.

With Parliament due to be dissolved in early November 2019 to make way for election campaigning, Euromonitor International’s overall probabilities for some kind of FTA or Light Brexit scenario stand at around 70% (from 60% previously), reducing the probability of No-Deal Brexit scenarios to around 30% (from 40% previously). The passage of Johnson’s deal is still uncertain, but for the first time, there is a deal that is acceptable to most hard Brexiteers. This means the overwhelming majority of MP’s support some kind of Brexit deal or remaining in the EU.

Depending on the election outcome, Johnson’s push for his deal could be easier with Conservatives gaining significantly more seats or even a majority. Alternatively, a decline in the number of Conservative MPs may open the road for concessions towards a softer Brexit, such as a CU amendment or a second Brexit referendum between Johnson’s deal and remaining in the EU. The current EU position allows for the establishment of a closer relationship, such as a CU or a Light Brexit including EU Single Market membership. Hardcore Remainers will likely let Johnson’s deal through rather than risk a No-Deal Brexit, at least by abstaining.

No-Deal Brexit Still on the Table

In the baseline scenario, the UK’s economy expands by 1.2% in real terms in 2020, followed by a long-term annual growth rate of around 1.5%. The shift towards a more likely FTA rather than a CU has led to a cumulative reduction in the baseline forecasts with around 1.5% lower long-term UK GDP levels. We assign this baseline outlook a 50% probability. 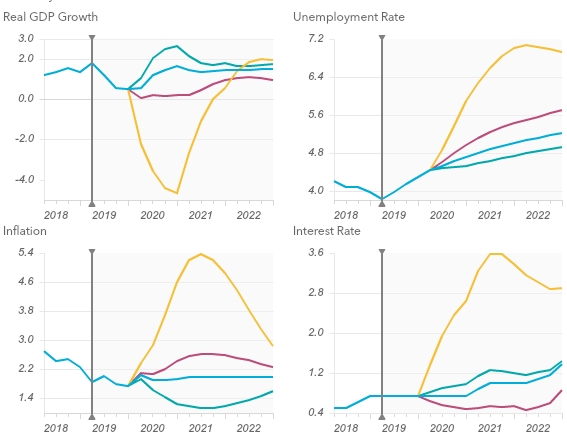 • In our main No-Deal Brexit scenario, real UK economic growth declines to 0.2% in 2020. Over five years, UK real output levels decline by 2-5% below the baseline forecast. We assign this scenario a 20% probability;

• In a Disorderly No-Deal Brexit scenario, UK output would contract by around 3.7% in 2020 in real terms, with long-term declines in economic activity of 5-9% relative to the baseline. This scenario is now assigned a 10% probability;

• At the time of writing, the Conservatives will likely gain more seats and possibly a majority in the upcoming elections. However, an upset in which the Labour party wins the election or Conservatives are significantly weakened remains possible, likely leading to a new Brexit referendum and potentially a lighter Brexit or a decision to remain in the EU. In such a Light/No Brexit scenario, UK real GDP growth would recover to around 2% in 2020, with a longer-term boost to UK output levels of 1-3%. However, this outcome has become less likely, with a probability of 20%.

The removal of the backstop from the Brexit deal also means that a No-Deal Brexit could still happen at the end of the transition period, unless this is amended. Brexit uncertainty is set to continue in 2020 until the terms of a new FTA have been agreed. According to Euromonitor’s 2019 Lifestyles Survey, 42% of UK respondents said there will be more political unrest in the country in the next five years versus 15% who said there would be less.