No-Deal Brexit has been avoided. On Christmas Eve, the UK and the EU struck a last-minute trade agreement to avoid disruptions threatening to prolong the current economic downturn affecting both the EU and the UK. This accomplishment means the relationship between the two blocs is set to continue on positive terms.

Brexit costs have been massive due to the uncertainty the four-year post-referendum period has created for businesses and individuals. The reached agreement will provide clarity for businesses and should encourage investment. This development was needed in order to help the UK and European economies begin to recover in 2021.

Despite the two blocs agreeing to a deal, several future risks remain. EU-UK trade will continue to be at the center of discussion in UK and EU policies because of its size and importance to individual countries. As businesses would be significantly affected by changes in the regulations, we will continue to monitor any developments.

How did the UK and EU resolve the three main Brexit issues?

The main three hurdles of the Brexit deal were how to ensure a level playing field for UK and EU businesses, enforce the agreement, and define the EU access to UK fishing waters. These issues have been resolved for the moment, but they are likely to cause concern going forward.

On the level playing field, the UK will have full independence and it will not have to follow European laws. As a default, zero tariffs and zero quotas on all goods remain. However, the EU will have the right to impose tariffs on British goods if the bloc can show that the UK has distorted fair competition. This regulation is symmetric as the UK would also be able to impose tariffs on EU goods should the EU create unfair advantages for its businesses.

With regard to enforcing the new trade deal, the UK and the EU will establish a Joint Partnership Council. The council will ensure that the agreement is properly understood and applied. In cases of disagreement, the parties will resolve disputes within the council.

On fisheries, the UK will become a sovereign independent coastal state but there will be a five-and-half-year transition period during which the EU share of fishing in UK waters will decline by 25%. After the transition period, annual fishing quota negotiations will be held to determine the fishing rights.

The Brexit deal is done but potential disagreement points remain

The level playing field aims to ensure fair competition between businesses but because the EU is the larger trade actor, its tariffs would have a greater effect. UK exports to the EU make up 46.0% of its total exports or 7.8% of UK GDP, while EU exports to the UK make up only 6.1% of its exports (including intra-EU trade) or 2.2% of EU GDP. Relative to its GDP, Belgium, the Netherlands, Ireland, and Malta are the EU countries that would be most affected by trade disruptions with the UK. Belgium, the Netherlands, and Ireland export 6.4%, 5.2%, and 4.4%, respectively, of their GDP to the UK, while Malta imports as much as 12.2% of its GDP from the UK. 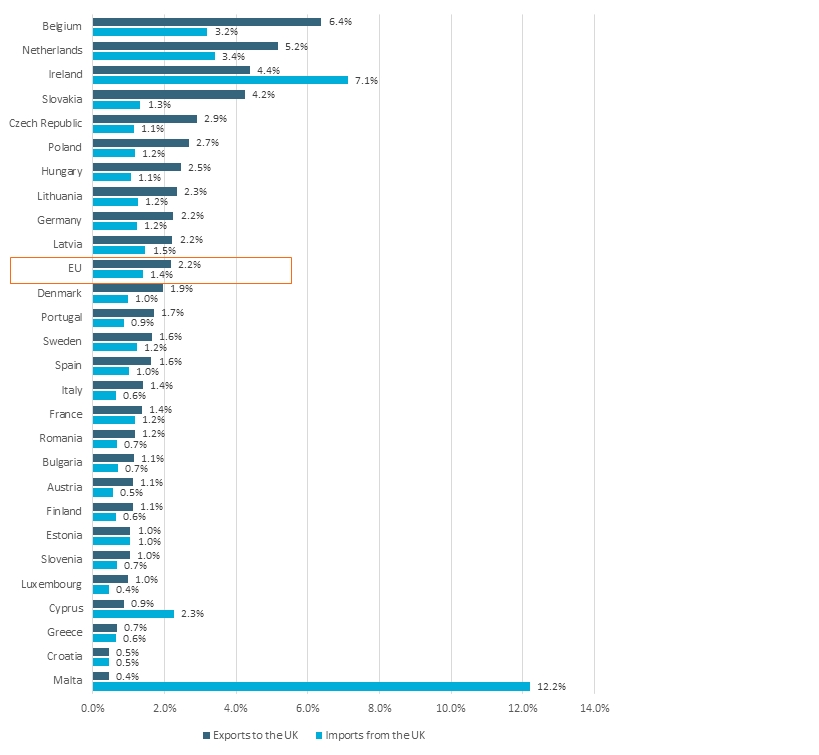 Source: Euromonitor International from International Monetary Fund (IMF), Direction of Trade Statistics Note: EU figure does not include the UK[/caption]

Fishing rights for the EU are guaranteed for five and a half years, but afterward, they will have to be renegotiated annually. A deal between Gibraltar and Spain for free movement of individuals has not yet been reached, while Northern Ireland will have to adhere to EU regulations as agreed in the earlier Withdrawal Agreement Bill to avoid a physical border between Northern Ireland and the Republic of Ireland. All these points could create disagreements in the future.

Since the EU and UK reached this deal, we will eliminate Euromonitor International No-Deal Brexit and Disorderly No-Deal Brexit scenarios in our next macroeconomic forecasts update on 18 January. Our baseline scenario was based on an assumption that the UK and EU will reach a free trade agreement: according to it, the UK will grow by 5.0% in 2021 and 3.3% in 2022 as the COVID-19 pandemic recedes following mass vaccination and Brexit uncertainty is left behind.

Global Overview of the Energy Industry