With emerging and developing markets expected to account for almost 70% of global gross domestic product (GDP) in purchasing power parity terms by 2040 and around two thirds of global growth in consumer expenditure between 2021-2040, the opportunities for consumer goods companies in these markets remain strong. Yet quantifying the opportunity and building a strong strategy founded on hard facts is not easy. When researching and using data from emerging markets, there are numerous challenges regarding data availability and quality.

In Euromonitor International’s global market research, we abide by six key guidelines to ensure our data quality is of the highest standards. Learn our six tips for working with emerging market data below.

The quality of national statistics can sometimes be questionable, as outdated methodologies, a lack of technology or political bias can all lead to lower data quality. For businesses looking to evaluate emerging markets and lessen risk, this adds complications and uncertainty to the decision-making process.

One example of national statistics data quality is Nigeria’s GDP. In 2013, Nigeria rebased its GDP to capture new sectors in the economy, such as telecommunications, movies and retailing, which were not reported or under-reported before. This exercise led to a 90% increase in Nigeria’s GDP size, turning the economy to the largest in Africa. The revised statistics gave Nigeria a new status, but the country’s economic reality in fact remained the same. For businesses, when looking at emerging market data, it is therefore always important to question the quality and compare the figures against countries with a similar demographic and economic profile for a better judgement of the country’s performance. Having access to cross-country comparable data is thus key.

Sometimes you need to decide which of different datasets to use. For example, the National Bureau of Statistics of China does not report migration data. Nevertheless, net migration can easily be calculated, as population, live birth and death statistics are available from China’s national statistics. However, the results of such a calculation look suspiciously low, with the most likely explanation being that it does not consider illegal migration. Based on other countries’ migration data, the UN estimates that it might be much higher. Working with a market research provider, you can be assured that you will be provided with datasets that are the highest quality and the most reliable.

Data availability for some emerging markets can be low and sometimes the data you wish to have are not available. In this case it is worth considering proxies to help you gain better context of a market.

For example, data on the possession of durables, employment, urbanisation and education can be a good proxy for income data when trying to size the middle class. Meanwhile, a low proportion of the population using at least basic sanitation services or a high share of the urban population living in slums are indications of a high number of people living below the poverty line. Annual disposable income can be approximated using GDP or consumer expenditure. Another example is that broadband internet subscribers and network coverage data can be proxies for the percentage of households having access to broadband internet.

We can also use data as the building blocks for missing figures. For instance, there is a major lack of data on the possession of air conditioners, when changing climate conditions and previously unexperienced heatwaves indicate increasing demand for such items for households. More reliable estimates can be constructed by using high-quality and more widely available data on imports, market size and maximum temperatures. With the help of such proxies, the market situation can be measured more accurately, and the most recent trends can be better captured.

National surveys – the basis of many national statistics on households and income – are often carried out sporadically. This can be a problem, especially when you try to obtain information about a fast-growing and evolving emerging market. What was true in 2015 might be extremely different to the situation in 2019. Again, benchmarking with similar countries, or comparing against related datasets, can help here, as this can enable data to be extrapolated. For instance, a lack of recent data on population by education in country X could be addressed by looking at enrolment or completion rates (which are generally more widely available) and the growth in the population by education in neighbouring countries. Another example is that Input-Output tables – a main source of industrial data – are usually published with a three year lag, but various up-to-date indices can be used in order to fill in these gaps. These approaches are applied at Euromonitor International: our analysts spend a large amount of time and effort making their own estimates in order to create a comprehensive and timely dataset.

Regional variations can be extreme in emerging markets. If you research emerging markets in order to decide market entry, it could be worth trying to find city-specific or region-specific data or urban data rather than national figures. Euromonitor International provides data with such geographic breakdowns, enabling you to have data up to city level, as well as urban vs rural location. A few examples of how large such regional differences can be: in Angola, Brazil and South Africa, urban consumer expenditure per capita was double that of rural spending in 2020; in Moscow and Saint Petersburg, consumer expenditure per capita in 2020 was 1.6 and 1.2 times higher than the average for Russia, respectively. 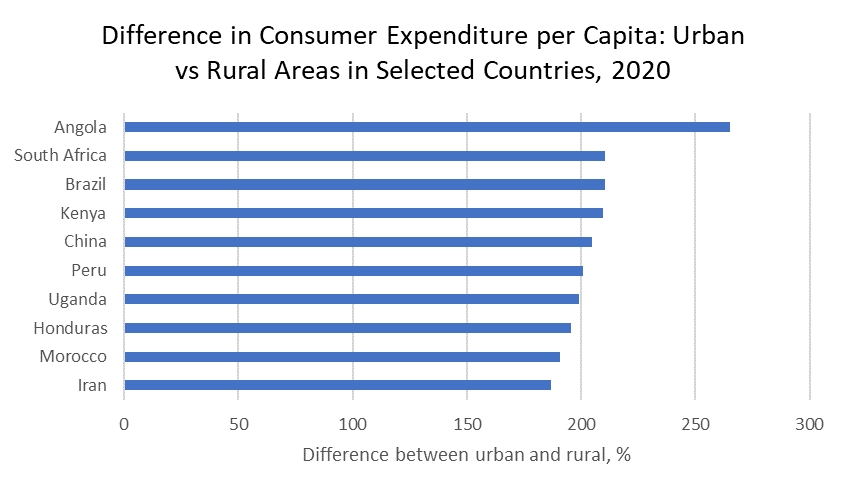 Cross-country comparability of definitions is always a challenge, no matter the level of development of an economy. However, it can be magnified in emerging markets. For instance, a seemingly straightforward indicator such as “Possession of Washing Machines” might include a range of definitions – including manual washing machines which do not use electricity. “Air conditioners” might cover simple fans or ventilators. “Tablet” may include e-readers or not. “Motorcycles” in some countries also includes low-power mopeds that do not need registration. “Cookers” could include various rice cookers, bread cookers, etc., which are not typical across a wide range of countries. For a manufacturer of household goods, such penetration data are very important, as they indicate whether the market still has potential or is already saturated. In Euromonitor International we closely look at these definitions in order to produce standardised data that enable companies to make cross-country comparisons.

When researching household facilities for one project, we were surprised to find that the percentage of households with a toilet was astonishingly high in some emerging markets. After checking definitions and methodology, it appeared that the data from some countries were about whether a household had any toilet or shower, and even the use of a bucket meant yes. Whereas in developed countries, the percentage of households with access to a toilet usually means a flush toilet – an installation provided with piped water that permits humans to discharge their waste and from which the waste is flushed by water. By looking at the detailed data on toilet facilities, we can see what are included, such as in the cases of data for Vietnam and Cambodia, below. We select the statistics that match our definition to build our dataset. By carrying out this kind of due diligence, we strive to provide accurate data that are cross-country comparable, helping businesses to make informed decisions that are based on hard facts. 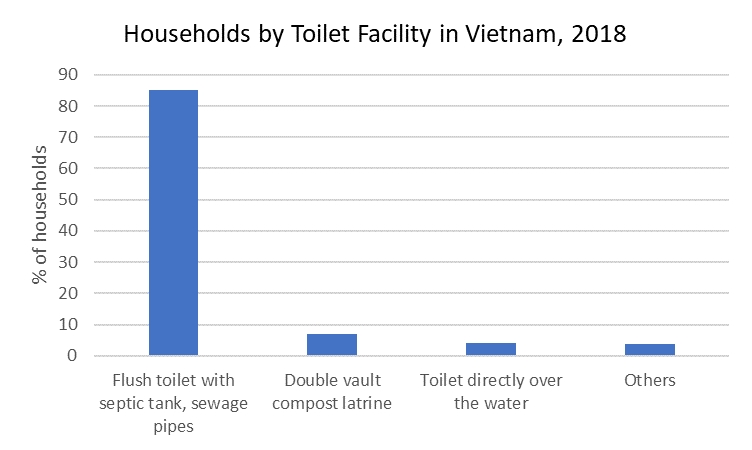 Some statistical offices only provide data in pdf reports or charts, and it can be nearly impossible or very time-consuming to enter the data into statistical software even using special conversion or scraping programmes. The data can also be hard to search for if it are in a pdf. Statistical office websites can also be extremely slow, with lots of dead-ends and error messages. There are also language barriers. These can be alleviated by translation software, but still pose a challenge when trying to understand precise definitions. In addition, several countries only stock publications in hard copy or electronic copy available only for residents. At Euromonitor International, our wide network of in-country analysts in emerging markets helps us to obtain needed publications or statistical information within the country being researched.

We are now living in an era in which data are more valuable than ever. Having the correct data and knowing how to make full use of them can help your business to make bold, informed decisions and thrive. The issues with emerging market data are often obvious, as mentioned above. A market research provider such as Euromonitor International, that is well-nuanced in the world of emerging market data, can help you in this matter, as we ensure the reliability, quality and cross-comparability of our data. To learn more about how Euromonitor International can help you with accurate emerging market data, contact us or request a demo of our Passport research database.