As time goes on, the one issue that has not waned in the public consciousness due to fads and headlines across industries is sustainability. According to Euromonitor International’s Voice of the Consumer Lifestyles survey, in 2021, 65% of consumers highlighted they are concerned about the impact of climate change on their lives, and 67% of consumers reported trying to have a positive action on the environment through their daily actions. This translates to their support of the diverse array of industries and products that they interact with on a daily basis. One industry that has certainly not been left out of the fray is alcoholic drinks. As beer is the largest category within alcoholic drinks, with a global size of 129.1 billion litres and an expected average growth rate of 4.3% over the next five years, it is a natural focal point in the sustainability discussion for the industry.

In addition, for the last decade alcoholic drinks as an industry has relied on premium imaging as a main selling point to appeal to curious consumers with rising incomes all over the world. Moving into 2020, the premiumisation trend stalled, as middle-income consumers found themselves unemployed, furloughed or with restricted working hours. In 2021, most of these socioeconomic issues have not been resolved. As a result, it is important for brands, particularly those with premium price points, to look for new ways to justify their added-value proposition. Craft beer is particularly exposed to this global trend as it is built on small-scale production and quality ingredients and finds itself at higher average price points even in retail outlets, as showcased through Euromonitor International’s pricing tracker, Via. 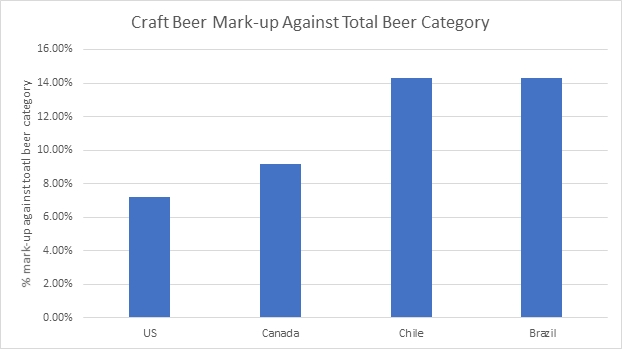 Adopting ethical claims is an important way that brand owners in this space can maintain their value-added propositions. When thinking about sustainability, certain green issues have taken a back seat in the last year, such as reducing plastic waste, and reusing containers and products due to the health concerns spurred by the pandemic. However, consumers have gained interest in holistic sustainability solutions, such as supporting local businesses, purchasing locally sourced products and showing concern for food and water waste in their communities.

Much of this growing focus on ethical considerations has also been spurred by large companies with high visibility in this space. From encouraging local business support, such as Tiendita Cerca, an app launched by the Mexican beer company Grupo Modelo, to Heineken’s Sol brand committing to sourcing 70% of its brewing operations from renewable energy (such as solar panels), there is a growing investment in these broader sustainability initiatives, which makes this an opportune time for local brands to adopt new strategies.

Effective use of claims is underutilised

One opportunity for aligning with this growing ethically-conscious consumer base is the effective use of claims. With the exception of North America, the percentage of beer brands highlighting a sustainable claim on the packaging is much lower than spirits and wine brands. There have been notable labelling pushes in wine brands in certain regions, such as Western Europe and Asia Pacific, mostly through organic claims, followed by environmentally-friendly and recyclability claims. Notably, claims such as carbon-neutral and fair trade are not currently being pursued to similar levels.

Beyond claims, which can run the risk of being overlooked by consumers, there are also the key factors of advertising and consumer education through conveying story-based sustainability actions. As we exit the pandemic, there is an opportunity for brewers to highlight some key sustainability successes through demonstrating their innovations in water efficiency, finding a “second life” for by-products generated, and sequestering carbon dioxide, for example. We have seen notable ventures into these broader initiatives already through craft players, particularly in the Americas, which have taken on processes that align with the United Nations’ Sustainable Development Goals (SDGs), that provide key global issues to be tackled locally in actionable ways. When looking at Euromonitor International's Voice of the Industry survey, last fielded in October 2020, many of the survey respondents in the food and beverage industry globally highlighted a few goals with which they had invested lately, notably: responsible consumption, gender equality, climate action and clean water and sanitation.

Craft players as a model for innovation

When we narrow in on the craft space, we can already see examples of brands tapping into these goals. The brand Oceanica, a seawater-sourced beer in Uruguay, highlights its commitment to clean water and sanitation. In terms of gender equality, Mikerphone Brewing in Chicago donates a proportion of its sales to women experiencing domestic violence. In Portland, Oregon, Hopworks Urban Brewery engages with a population that is culturally more interested in sustainable agricultural practices. It uses Kernza, a cultivar of a wheatgrass that is a perennial and requires less water for farming, which resonates with the populations it serves and highlights its commitment to responsible consumption and production. Finally, there has also been recent growth in beer brands committing to carbon neutrality in their production cycle to mitigate climate change, such as Fat Tire beer from New Belgium Brewing Co. The United Nations’ SDGs can serve as a reference point for brand owners looking to identify a global issue to which they can stake a claim through their local production.

However, another important point to consider in the planning stage of a sustainable brand narrative is an understanding of local consumer concerns. What is notable in all these cases is that the brands glean from the ethical zeitgeist of their local communities to align these initiatives with what is important to consumers in their countries and regions. This will be key to developing sustainable narratives for craft beer, a segment of the beer industry that already builds branding from a grassroots positioning and contribution to the local community.

The old model of premiumisation, built on high-quality ingredients alone, will no longer be a viable marketing strategy in 2021. Consumers with tighter wallets will require more justification than a quality beverage to pay a premium for their drink of choice. Craft beer as a hyperlocal premium product finds itself at the nexus of renewed consumer attention towards local and ethical products, and supply chain resiliency during a time of restricted borders, giving this segment more space to innovate. In addition, as sustainability continues to draw attention with greater climate variability, and as younger consumers continue to reach adulthood, it is safe to say that a narrative built on this ethical framework will only continue to increase in relevance. What will be key to successful implementation is effective communication through a grassroots narrative showcasing unique innovations in climate mitigation strategies.

Sustainability in Business: Capturing the Value

With the rise of consumer price inflation impacting almost all CPG in the world and Asia Pacific in 2022, this report seeks to examine how soft drinks companies…