Providing on-the-go energy has always been a preoccupation of beverages in C-store channels. Even so, the number of products aiming at energy occasions was notable at the 2021 National Association of Convenience Store Show (NACS) in Chicago, IL. Energy drink and RTD coffee sales did not drop as initially expected during the pandemic and this was in large part due to strong sales at channels like C-stores that never shut down. With even a global pandemic not capable of strongly denting demand for on-the-go energy in US convenience stores, it is not surprising that many exhibitors at the NACS show were eager to show their new energy beverages.

Monster Beverage and Red Bull, the traditional heavyweights in this area, were both present with large booths and a wide array of products, but they were joined by many smaller companies eager to take on the established brands and offer a different sort of energy experience. The success of Bang Energy and the rise of the RTD coffee segment in recent years meant that there are two main areas these challengers are clustering in: energy drinks with cleaner ingredients lists and RTD coffees with more explicitly functional purposes than before.

It is striking to see the extent that caffeine levels are rising in the RTD coffee category. Death Wish Coffee, for example, was present at the show promoting its new RTD products, each with 300mg of caffeine in an 8oz can. The C-store channel is newer to Death Wish but its product offerings are in line with emerging demand patterns, so it is a natural next step for the brand. Black Rifle, another relative newcomer to the RTD coffee category, was also showcasing SKUs with 300mg per can, but also with smaller 200 mg products available (still considerably more than a Red Bull).

New energy drinks are also appearing to challenge the established C-store offerings. They usually emphasise clean labels and short ingredient lists. Riot Energy, for example, prominently displays a 100% “plant-powered” claim and organic certification. Kona Gold has taken the unusual step of promoting the energising properties of hemp, while Nocoo offers BCAA as its distinguishing ingredient. What was not included was often equally important than what was; “free from” claims like sugar free or no artificial ingredients were common among the newer energy offerings as what set them apart from the established brands.

Energy as a unified category

Clean category distinctions though are increasingly for the smaller booths where only one brand is present. The larger beverage companies have wider energy strategies, rather than a strategy specifically for energy drinks or RTD coffee. At the PepsiCo booth for example, new products (Mountain Dew Rise, Starbucks Baya) were promoted not by their brand lines but rather for the type of energy they provide. Appealing to increasingly specific consumer demands for energy is the ideal for those who have the resources to offer products from multiple brand lines and beverage categories. In the era of no-carb energy drinks and caffeinated sparkling water, the traditional category boundaries matter far less than they used to. 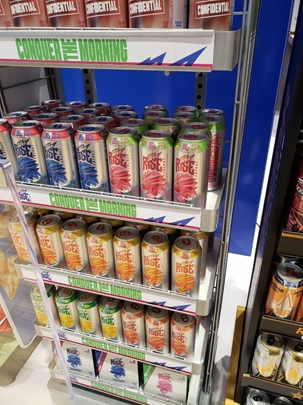 There seems to be no slowing the growth in caffeine consumption among US consumers. As long as that remains true, new product launches with steadily rising caffeine levels will continue to take place and the C-store will continue to be a critical channel that determines their success.