China’s weight and influence in the global wealth landscape has increased spectacularly and is expected to continue over the medium to long term. Already in 2018, the country is home to the second-largest number of ultra-high net worth individuals (UHNWIs – adults with a net wealth exceeding US$50 million), behind only the U.S. China is also among the top 10 largest populations of high net worth individuals (HNWIs – adults with net worth of US$5.0 million – US$50 million).

A key driver of global wealth

In the baseline scenario – the most likely future outlook – the forecasts on China’s ultra-HNW, HNW and affluent segments for the coming years are fairly positive, despite falling exports and debt concerns causing some uncertainty.

Between 2018 and 2023, the ultra-HNW, HNW and affluent populations are set to expand by around 41% and the aggregate wealth of each of these segments is expected to increase by around 40%. These expansions are supported by a still-strong property market and the structural shift from manufacturing to services, technology and innovation, which underpin economic growth and wealth gains. 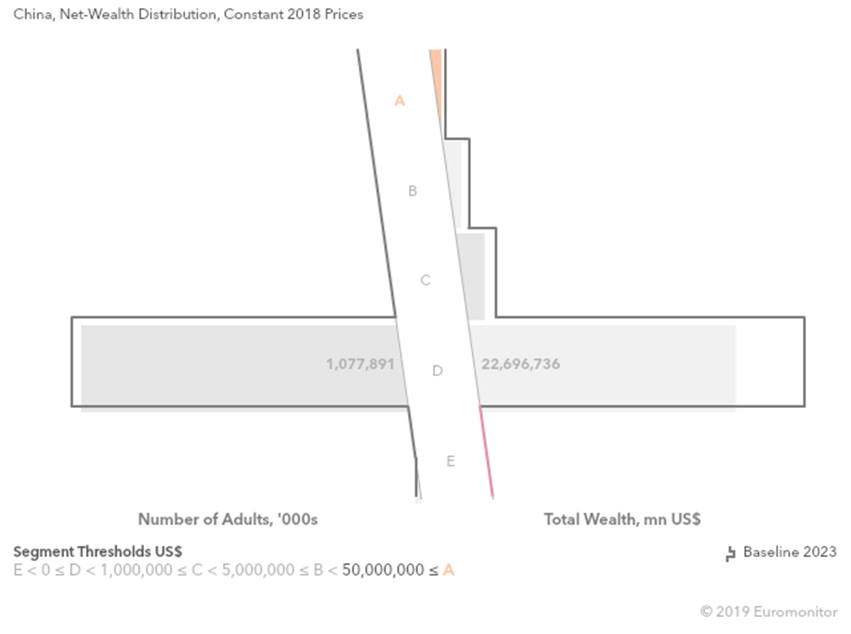 While baseline forecasts represent the most likely outcome, there is the probability of risk scenarios, such as the U.S.-China trade war or global downturn, that impact wealth projections in China.

Despite the focus of news reports on a U.S.-China trade war, the Chinese economy is relatively robust and resilient to rising trade tensions with the U.S., as it becomes more domestically and Asia Pacific centred. China is expected to see continued – albeit slowing – growth in ultra-HNW, HNW and affluent populations and their wealth amid a U.S.-China trade war in the period through to 2023.

A global downturn would have had a greater impact on China’s ultra-HNW, HNW and affluent population and wealth in that it causes their growth to decelerate more than in the U.S.-China trade war scenario.

However, wealthy and affluent Chinese are not expected to see their wealth to contract thanks to their lower exposure to the stock market. In the U.S. the wealthy population are exposed to financial markets and would thereby suffer wealth declines as a result of stock market losses in a global downturn.

The German luxury automobile manufacturer Mercedes-Benz has enjoyed rising sales in China in 2018 and so far in 2019. This is extraordinary considering that car sales in the country in 2018 fell for the first time since 1990.

Thanks to rising sales, Mercedes-Benz took over Audi and BMW, its two main rivals in the country, and became the leader of China’s luxury market in 2018. Mercedes-Benz is poised to widen its sales lead by quickly expanding its line-up of locally-built models, including the first China-made electric vehicle, the EQC. As of 2019, 70% of its vehicles sold in the country were “Made in China, for China”.

Localisation has proved to be an effective strategy for Mercedes-Benz as it allows the brand to keep a finger on the pulse of wealthy Chinese consumers, adjust to their preferences and needs, tap into China’s continued wealth gains, and drive growth.