Travel and tourism was poised for an upturn in 2022, as it hoped to put the pandemic behind it. However, new threats have recently emerged that will delay the much-needed recovery.

At the beginning of 2022, there were warning signs that inflation was surging, with higher energy and food prices, caused primarily by disruptions and disconnects in the global supply chain. Travel players from airlines to cruise to online travel agents reported that the impact of rising costs was feeding through into higher prices for consumers. Rising prices could have been the perfect recovery lever when meeting a surge of pent-up demand now that the pandemic is more under control, thanks to mass vaccinations leading to the removal of travel restrictions in most regions.

However, on 24 February 2022, Russia invaded Ukraine and the price of oil breached the warning level of USD100 per barrel as economic sanctions took bite and countries began to seek alternatives to Russian oil and gas.

Europe’s tourism recovery has been paused, as efforts turn to helping the millions of Ukrainian refugees fleeing war and conflict, heading west to neighbouring countries such as Poland in one of the biggest humanitarian crises that Europe has seen since World War II.

According to Euromonitor International’s Travel Forecast Model, Russia accounts for 1% of outbound tourism spending, amounting to USD9.1 billion in 2021. The loss of high-spending Russian visitors will not derail recovery; however, it will be felt keenly in destinations across the world, from Europe and the Caribbean to Turkey and Thailand. The decline in Russian outbound tourism spending could bring it as much as 50% below the 2021 level, as economic sanctions, airspace closures and flight bans take effect.

The outlook for world tourism spending is growth of 92% in 2022; however, attaining 45% of pre-pandemic 2019 levels, operating well below capacity. Taking account of the collapse of Russian and Ukraine tourism in the near term, global inbound tourism will be impacted by USD6.9 billion in 2022, resulting in a potential loss of 0.9%, that will weigh down tourism potential to 2026, although everything depends on how long a peaceful solution takes to broker.

Travellers from long haul markets such as North America are already postponing their trips to Europe due to the conflict in Ukraine, with the need for a strong communication campaign to reassure visitors that Europe is safe and open for business.

Despite war overshadowing tourism recovery in Europe, it is the pandemic that continues to beset regions such as Asia Pacific and the Middle East and Africa. The new Omicron variant that appeared at the end of November 2021 caused major disruption and concern; however, the impact has proved to be short-lived. Countries such as the UK have already reopened to double-vaccinated travellers and removed all restrictions, shifting into the endemic stage and learning to live with the virus.

Over the short term, Asia is the last region to reopen its tourism sector, erring on the side of caution when it comes to opening borders and welcoming back international visitors, coupled with the complexities of interoperable health schemes, or lack of.

Countries such as China continue to follow a strict zero-COVID-19 policy, hampering recovery for destinations such as Thailand, which has rolled out its sandbox approach in popular locations such as Phuket and Koh Samui to enable a safe and controlled reopening strategy. Yet it is likely to remain starved of its number one, high-spending Chinese source market until at least early 2023.

In addition, vaccine inequity is a major hindrance to reopening in regions such as Asia Pacific, where 14.1% of low-income economies, according to Our World in Data, have received a vaccine, leading to a two-tiered recovery for the haves and have-nots. As the World Health Organization states, no-one is safe until everyone is safe from COVID-19. The blatant inequity of vaccine delivery is a thorn in the side of sustainable tourism recovery. 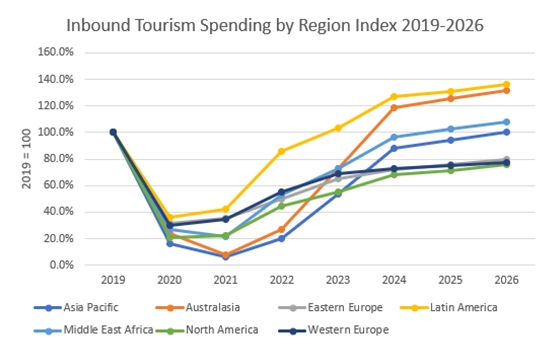