Poland, like other developed nations, is embarking on a transition to electric and alternative fuel mobility. Between 2018-2020, the country tripled the number of electric vehicle registrations (battery electric vehicles or BEVs and plug-in hybrid electric vehicles or PHEVs) to 6,000. In 2020, electric variants accounted for 1.5% of all new car registrations in Poland. While the country is lagging when compared to other nations such as Norway, Denmark and Sweden in electrifying its vehicle fleet, government policies and regulatory incentives, mounting supply of affordable electric vehicles, rising consumer incomes, improving electric charging infrastructure and growing awareness of environmental issues should spur a future boom in Poland’s electric vehicle sales. Indeed, according to forecasts by Euromonitor International, by 2040, 8 out of 10 new cars registered in Poland will be electric. 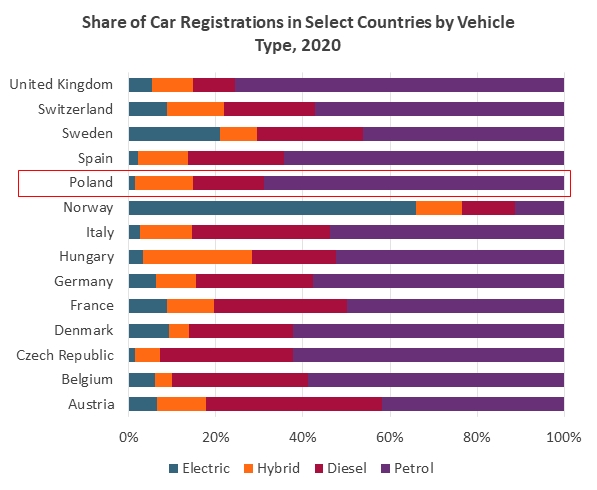 The Polish Government has made many ambitious remarks about the drive to electrify the national car fleet. In 2016 the government planned to boast 1 million electric vehicles on its roads by 2030, however, it modified this figure to 600,000 electric and hybrid vehicles in the Strategy for Sustainable Transport Development. Several strategic frameworks and regulations to spur electric car adoption were also introduced: the Electromobility Development Plan passed in March 2017; the Law on Electromobility and Alternative Fuels in February 2018 and the Law on Bio-components and Liquid Biofuels, which was revised and introduced the Low Emission Transport Fund to promote the development of alternative fuel vehicles.

Like other nations, Poland has put forward various financial measures that seek to incentivise consumers and businesses to make the transition to clean fuels. For example, the government launched the Green Car electric vehicles subsidies scheme in June 2020, providing consumers with 15% of the price or a maximum of PLN 18,750 (EUR4,400) towards an electric vehicle purchase. Such incentives were also introduced for businesses such as the eVan or Koliber programme which provided PLN 70,000 (EUR16,000) and PLN 25,000 (EUR6,000), respectively towards the purchasing or leasing of electric vehicles. Also, taxes are voided when registering an imported electric or fuel cell vehicle, with diesel or petrol car buyers having to pay a 3.1% excise tax or 18.6% of a vehicle’s net value depending on engine capacity. Besides, perks such as free car parking have similarly sought to persuade consumers to make the switch, especially in larger cities such as Warsaw, Lodz and Krakow, where parking space is at a premium.

In the early days, electric cars were viewed as a luxury purchase with lower and middle-income households being priced out. For example, the 2018 Tesla Model started at a price of USD74,500 and climbed to over USD135,000 with added features. However, rising competition coupled with falling car battery prices, have somewhat normalised the market. For example, the VW e-up! and the Fiat 500 all start at a price under EUR24,000, making the market more evenly balanced between the supply of mass market and luxury electric car options. In the future, this is only going to rise as manufacturers ramp up production and open up the market for used electric cars.

In tandem with falling prices, consumer incomes in Poland are rising, boosting the country’s middle class. In 2005, just 13% of Poland’s households earned incomes over USD25,000 while in 2020 this accelerated to 39%. A flourishing middle class will manifest in the greater embrace of electric cars as witnessed in other high electric car yielding markets such as Norway, Germany and Sweden, which benefit from a consumer base with high purchasing capacity. While Poland has lower spending power compared to its Western European peers, like other Eastern European nations, it will see a continued rapid rise in incomes. Between 2020-2040, disposable incomes per household in Poland will surge 68% in real terms – nearly three times the Western European average. This will undoubtedly push more Polish consumers to consider buying an electric vehicle and take advantage of available financial incentives. 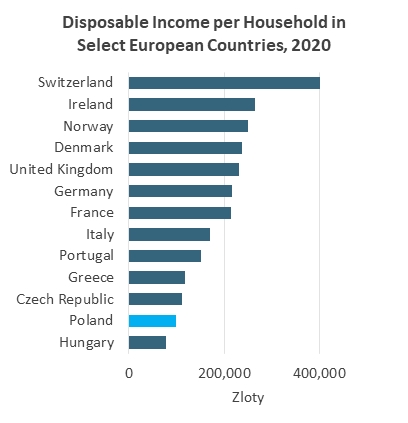 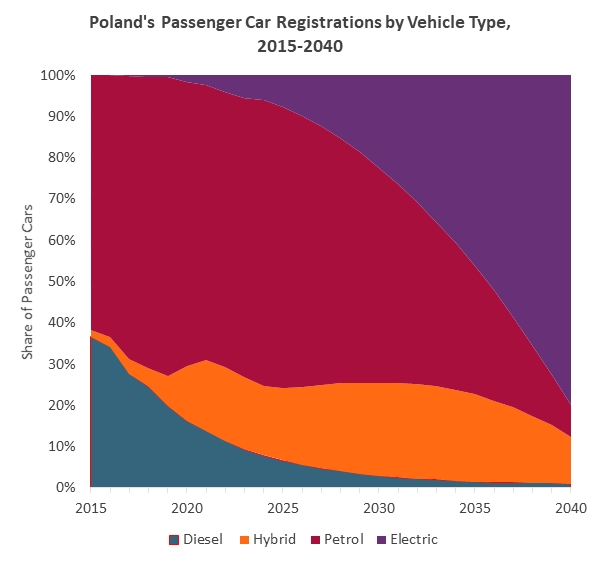 Underpinning the drive to increase electric mobility in Poland, consumers will need to recognise the environmental importance of electric power over fossil fuels. Air quality in Polish cities is among the worst in Europe. In 2017, the country ranked second to last among 28 countries in terms of PM2.5 particulate matter (particulates with a diameter of less than 2.5 micrometres). Over 21% of CO2 emissions in Poland came from transport as a share of CO2 emissions from the consumption and flaring of fossil fuels in 2020.

A shift from fossil fuels to electricity has the power to improve the situation, especially in cities that face some of the worst levels of air pollution countrywide. Consumers are already noticing this and are trying to remedy the situation by making better choices, for example, according to Euromonitor’s 2020 Lifestyle Survey, 41% of respondents in Poland try to reduce carbon emission by either driving less or taking public transport. With climate and sustainability activism rising, this will incite a greater shift to electric cars, a trend likely to become more widespread among younger adults (millennials and Gen Z). 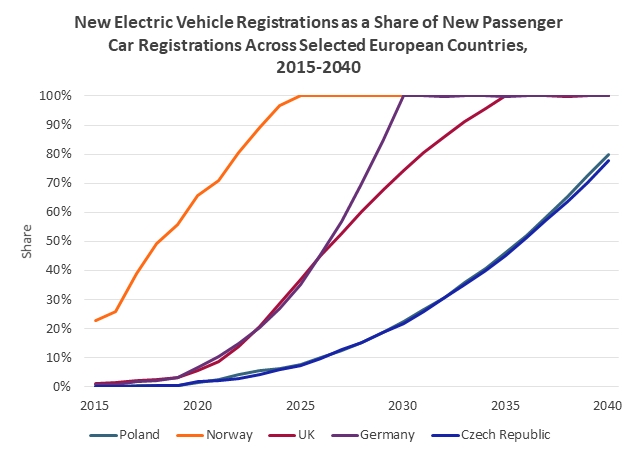 Poland is moving forward with its electric vehicle programme, albeit slightly slower than some of its peers. Nonetheless, government policies and incentives, the larger supply of affordable electric options, rising consumer incomes, increasing investment into charging infrastructure and a greater awareness of sustainability issues, will drive the Polish electric vehicles market forward. Collectively, these factors will lead to 8 out of 10 new car registrations in Poland being electric by 2040. This is not to say that there are areas of improvement such as the greater provision of free and fast electric charging stations as seen in other European cities such as Paris and Oslo or the equitable geographical provision of electric charging stations that are currently mostly exclusive to cities. But progress is happening, and it is only a matter of time until the country will reach the tipping point for EV adoption.

The New Era of Consumerism

In-Destination Experiences and Attractions Ripe for a Shake-Up