The top four sports leagues in the US have been cemented for decades; with the NFL, NBA, MLB and NHL dominating public awareness and brand sponsorship. The strength of these leagues seemingly left little room for challengers; yet, year on year, Euromonitor’s League Index indicates an ever-growing threat to this established hegemony, in the shape of MLS.

In 2022, MLS placed eighth in the world, according to the Euromonitor league rankings, scoring highly across key metrics such as exposure and fan engagement, and economic potential. With strong amateur participation, a diverse fanbase and a World Cup set to hit North America in 2026, is soccer ready to challenge the dominance of the major leagues?

Source: Euromonitor International
Note: Percentage value shows the share of total possible points scored by the league in total and according to different brackets

One of the main areas in which the growth of MLS can be seen is strong game attendance. MLS teams now regularly fill NFL-size stadiums in multiple markets, with Atlanta United leading MLS with an average home game attendance of over 48,000. Newcomers to the league Charlotte FC set an MLS attendance record in 2022, attracting over 74,000 fans to its inaugural home game. Strong attendance in expansion markets is especially exciting for the league, as this offers key opportunities to attract brand sponsors looking to expand their national footprint. While MLS unsurprisingly still falls behind NFL in per game attendance, it keeps pace with many of its peers, and even with the more established football leagues in Europe. This provides expansive in-game promotional opportunities that will continue to see MLS franchises secure lucrative sponsorship deals with even greater frequency over the coming seasons. 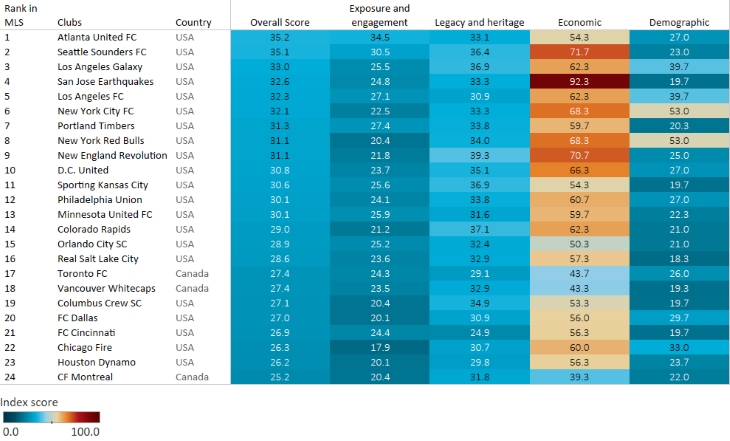 Source: Euromonitor International
Note: Percentage value shows the share of total possible points scored by the club in total and according to different brackets

A diverse, dynamic and engaged fanbase

Another main prospect for MLS over the other American leagues is the young and diverse nature of the fanbase. Soccer in the US has the rare ability to tap into a younger fanbase. Not only that, but the typical fan demographic is more diverse than other leagues and sports. According to a morning consult poll in 2022, 27% of soccer fans in the US identify as Hispanic, compared with only 17% across other sports. In total, 39% of soccer fans are people of colour, rivalled only by the NBA. These demographics make MLS a prime market for brands looking to reach young, tech-savvy consumers and consumers of colour. 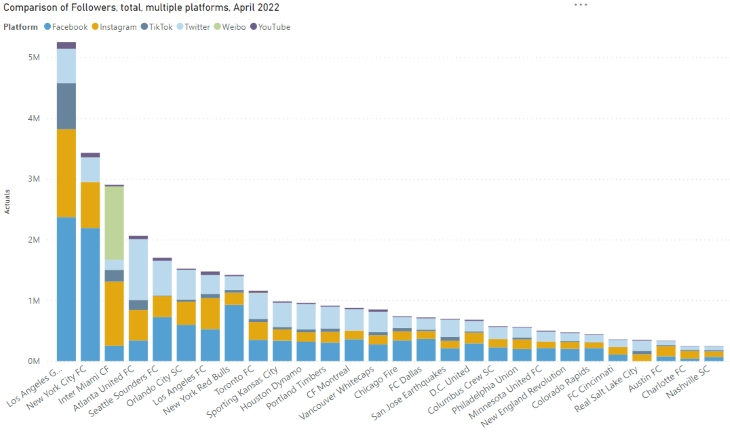 With a young and tech-savvy fanbase, MLS is among the top 20 most-followed leagues, globally. Nevertheless, with over 45 million followers across the league and its teams’ accounts, it still lags behind the big four major leagues in the US, and top soccer leagues in Latin America. MLS and its teams need to continue to optimise their digital strategies to unlock new fans online in order to outperform competitors.

Digital growth is expected to be aided by MLS and Apple TV signing a 10-year USD2.5 billion agreement to stream all MLS games on Apple TV+. This agreement will bring MLS action to millions, especially young viewers, who are more likely to stream sports online.

The future will bring commercial challenges and opportunities

However, MLS faces an uphill battle in many aspects. It is competing not just with the top American sports leagues, but with professional soccer leagues around the world. Due to the young nature of MLS and the star power in many international leagues, soccer fans in the US often favour watching international leagues. NBC Sports alone said its English Premier League broadcasts average 609,000 viewers in the US, and Liga MX averaged 845,000 US viewers in 2021.

Yet, there is plenty of reason to be optimistic. Commercially the league is performing well, and boasts a diverse, engaged and ever-expanding fanbase. The road to the men’s 2026 World Cup (to be hosted in the US, Canada and Mexico) will be paved with further growth opportunities for the league to become a more prominent player within the landscape of professional sports in North America.

For more of Euromonitor's analysis on this industry, read our briefing, The League and Club Indices 2022.