Through the closing of national borders and halting of travel worldwide, the Coronavirus (COVID-19) pandemic has disrupted human mobility since early 2020, ending a decade’s growth in the flow of migrants and remittances around the world.

Significant drops in migration and remittances have added downward pressures on growth in consumer spending, population and labour supply in various countries. Meanwhile, economic recovery in some countries could be hampered by lower labour supply and restrained consumption in the short and medium term.

Immigration has been a major component of population growth in developed countries. In fact, net migration – the difference between the number of immigrants into and emigrants from the area during the year – accounted for more than 60% of population growth in developed economies between 2010 and 2020. Without immigration, the populations of Germany and Italy would not have grown at all during the last decade. 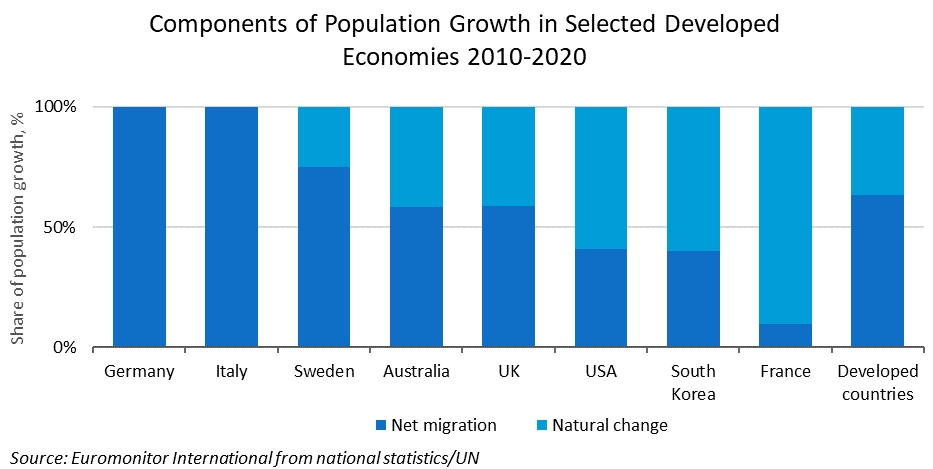 Last year, developed countries experienced a 40.0% decline in net migration – the deepest fall since 2000. The drop was even higher for major immigration destinations like the US, the UK, Spain and Italy.

Economies and businesses in some countries have felt the negative impact of disrupted immigration inflows. Companies in the UK have faced higher risk of labour shortages, as immigration wanes amid the pandemic and the country’s new immigration rules after leaving the European Union in early 2021. In Australia, universities suffered from a sharp drop in overseas student arrivals in 2020, threatening the health of the education sector (education accounted for 4.7% of Australia’s GDP in 2020). 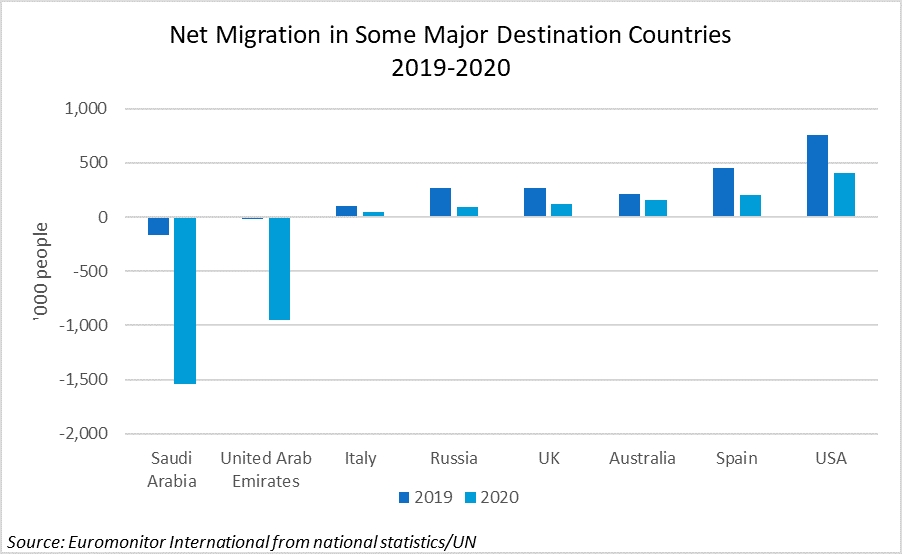 Combined with a rise in death rates during the pandemic and a further drop in birth rates during economic recession, a sharp decline in net immigration is slowing the growth of the population and workforce in advanced economies further.

In 2020, developed countries’ working-age population (those aged 15-64) contracted for the first time. Germany’s population showed almost no growth, while Italy and Japan’s depopulation trend deepened. As the age structure changes, population ageing will hasten, undermining productivity and economic growth in the long term. Businesses in advanced economies should be prepared for a stagnating consumer base but as older consumers continue to gain in importance, there will be growing opportunities for business catering to the needs of this market segment.

A sharp fall in global migration, coupled with massive job cuts and economic recession in many migrant-hosting countries, has resulted in a 7.0% decline in global remittance inflows in 2020, the highest drop since 2000, and higher than the 5.1% contraction recorded in 2009 amid the Global Financial Crisis. The Middle East and Africa saw the highest contraction in 2020 (8.4%), followed by Asia Pacific (7.3%). 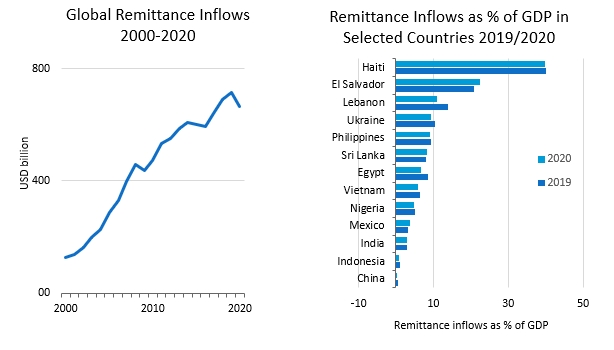 Though the level of dependency on remittances varies largely across the world, remittances finance trade balances and are a source of tax revenue for some governments. China and India have so far attracted the largest amount of remittance inflows, but other economies in Latin America (e.g. Mexico and El Salvador) and Asia Pacific (Kyrgyzstan, Sri Lanka, Philippines) are more dependent on remittances. In 2020, with remittance inflows dropping by 22.2%, Kyrgyzstan’s current account deficit jumped from 5.6% to 13.4% of GDP.

The significant fall in migrant remittances will also affect household income and spending power in some developing and emerging countries, since remittance has been a supplementary income source for many households. As total remittance inflows to India dropped by 13.0% in 2020, its per capita consumer expenditure also recorded a 13.7% real contraction in the same year.

Growth in Per Capita Remittance Inflows and Consumer Expenditure 2000-2020 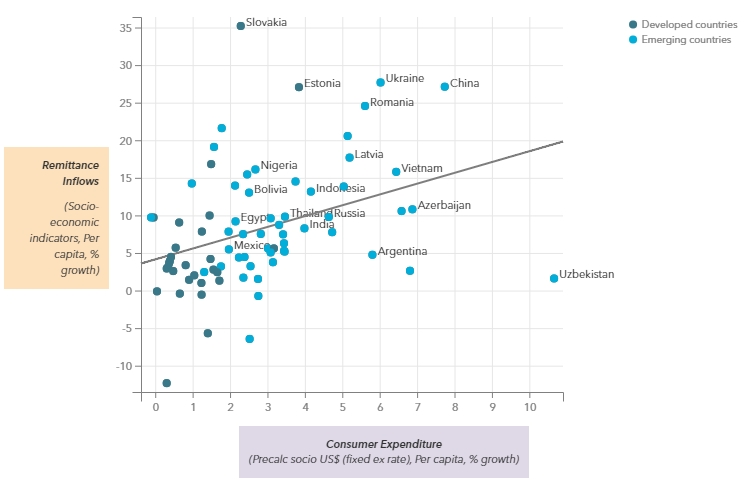 The sharp drop in remittances can also undermine poverty reduction efforts and give rise to inequality in some countries, as vulnerable households living on remittances have fewer resources to pay for food, dwelling, healthcare and education. Consumer markets can see an increased polarisation, with more households falling into the lower-income segment. In Sri Lanka, for example, social class E – the lowest-income consumer segment – expanded after some years of decline, growing by 0.6% in 2020.

Businesses operating in remittance-dependent economies will need to redefine affordability and readjust their product portfolios, distribution channels and pricing strategy in order to stay relevant. There will be growing opportunities for basic, budget products and services in sectors such as food, health, transport and communications.

In the financial sector, remittance services providers are facing headwinds now due to falling demand. Nevertheless, embracing digital solutions can help to reduce operational costs and provide more affordable services to customers. TransferWise – a fintech company focusing on money transfer – has reported an uplift in new customers seeking digital and cheaper alternatives to send money abroad since the outbreak of the pandemic.

Uncertainty remains for global migration and remittances in 2021

Though global migration is expected to rebound in 2021 amid vaccination rollouts and economic recovery in many parts of the world, the depth of the rebound will depend on when travel restrictions are lifted. Even once the pandemic has been curbed, most countries intend to open their borders in the second half of 2021 only, meaning international migration would probably not return to pre-pandemic levels yet. Weak economic growth in migrant-hosting countries can drive a further decline in remittances in 2021. Businesses around the world will need to keep an eye on migration and remittance trends in order to assess risks and adapt their business strategy.

To learn more about the impacts of migration and remittances on the consumer market, please download our report “Global Migration and Population Diversity: Trends, Market Impact and Opportunity”.

The Impact of Hybrid Working on Travel and Leisure

This briefing discusses the home care industry’s approach to environmental sustainability at a time of economic turmoil. Consumer demand for sustainable product…