Our Black Friday Sale is now live until Monday 29th November 2021! Apply a 15% discount to your cart in Store using promotional code: EBLACKFR21

South Africa was already in an economic recession prior to the coronavirus (COVID-19) pandemic due to structurally weak government finances, ongoing electricity shortages, lacklustre industry growth and diminishing business and consumer confidence. As a result of the lockdown imposed, the consumer goods industry in South Africa is facing severe disruption.

Essential goods have been affected least, while industries with a high level of exposure to discretionary spending, defined as “non-essential” by the government have been dealt a more severe blow. The post-lockdown recovery which has compounded the recession the country was already in will impact consumer spending due to the hit on already high unemployment levels pre-pandemic (forecast at 29.8% in Q1 2020).

Despite a young population, South Africa is particularly vulnerable to COVID-19 due to high levels of poverty, unemployment, and a large immunocompromised population due to high incidences of HIV and tuberculosis. The unfortunate combination of poor economic performance combined with the pandemic contributed to a sovereign rating downgrade below investment grade a day after the lockdown was imposed.

The South African government was initially lauded for its rapid and decisive response. From implementing one of the most restrictive lockdown’s globally, to announcing several emergency economic stimulus packages to soften the economic blow. However, the longer-term economic impact of the lockdown is arguably a bigger threat than COVID-19 itself and the government is increasingly criticised by opposition parties, social commentators, economists and some citizens for what is considered overly restrictive, oftentimes contradictory measures. In a recent court judgement, currently under appeal by the government, the high court found the lockdown lawful, but was also critical of individual “irrational” lockdown regulations.

Euromonitor International predicts the South African economy will contract between 5.5 and 9.9% due to the impact of COVID-19 in real GDP terms in 2020. The economic consequences will have a medium to long-term impact on fast-moving consumer goods due to regulations introduced as part of the lockdown, changes in consumer behaviour and supply chain disruption.

Both consumer goods and service industries face a range of challenges in this disruptive milieu:

• Navigating changing regulations: A National State of Disaster was enacted on 15 March, followed by a “hard” lockdown instituted on 26 March. Coinciding regulations included travel bans, school closures and the closure of all stores selling non-essential goods. The hard lockdown was followed by “alert levels” introduced in May. The aim of the levels (level 5 through 1, with level 5 being the most restrictive), reviewed bi-weekly, is to ensure the response to the pandemic is as precise and targeted as possible, allowing for different levels per province, district and metropolitan area while balancing the gradual re-opening of the economy.

• Disruption in supply chain creates bottlenecks: Consumers’ shopping behaviour and product choices have shifted, with manufacturers and retailers struggling to keep up, which has led to the erratic supply of certain goods.

• Consumer behaviour continues to evolve, with some changes set to remain: Initial panic buying led to stock shortages. Impulse purchases have been negatively affected, with fewer, higher value and more targeted shopping trips the new norm. In many households, the person responsible for shopping has also changed, influencing brand and product choice.

Grocery retailers have had to quickly adapt and innovate to remain competitive. These include the piloting of a contactless “drive through” option by Woolworths, allowing customers to maintain social distancing combined with added convenience. Pick ‘n Pay, struggling to meet e-commerce demand, partnered with the Bottles App, a pre-lockdown alcoholic drinks delivery service, to provide same-day delivery of essential goods. The company also allows shoppers to email their grocery list for collection at certain stores and introduced mobile contactless payments to promote social distancing.

Consumer interest in e-commerce surged, albeit from a relatively low base, i.e. 1.9% of retailing in South Africa. However, online retailing remained closed until mid-May for non-essential products. In addition, the channel struggles to keep up with increased demand and remains inaccessible to many, especially lower-income consumers. M-commerce has also witnessed a surge. For example, there are reports of informal traders and traditional grocers, such as Spaza shops, taking orders via WhatsApp. In addition, orders via mobile applications have also increased significantly.

Nevertheless, other companies such as Netflorist and UberEats expanded their product offering to include fresh food and other essential products adapting to shifting consumer needs.

Non-grocery retailer specialists have been less fortunate, most being unable to trade during the initial lockdown phase, later eased as lockdown “alert levels” changed. For example, numerous non-grocery specialist retailers have called for the lifting and adjustment of rental fees, while major players such as Edcon, struggling financially before the pandemic hit entered business rescue.

Over the long term, the retail industry will continue to be affected negatively by a decline in disposable income and increased unemployment compared to what was expected pre-COVID-19.

Alcohol and tobacco sales witnessed a short-term surge as some consumers stockpiled in anticipation of the lockdown and sales ban during the hard lockdown. The government created confusion by rescinding on an earlier announcement to allow the sales of tobacco on “level 4”, subsequently changed to level 3 and now level 1. This has led to the market leader, BAT, pursuing legal action. In addition, the Fair-trade Independent Tobacco Association has lodged an ongoing court challenge to the ban. The ban is a major driver of increased illicit sales as consumers turn to the black market. Euromonitor International expects the tobacco market to contract by no less than 8% in 2020. Tax revenue also been negatively affected, with an estimated ZAR1.5 billion loss in revenue during April alone due the ban on sales of tobacco and alcohol.

The sale of alcohol was also banned until 1 June, with sales allowed during restricted hours on four days a week for off-trade consumption only. The industry is expected to contract by 1% in value terms during 2020, despite sales expected to increase for a short period subsequent to the lifting of the ban. Meanwhile, some companies have responded to shifts in consumer demand. For example, the demand for non-alcoholic beer has increased considerably. Moreover, Distell has shifted production to hand sanitiser and the provision of ethanol for hygiene products, an example of companies prioritising purpose over profit. Reformulation and packaging innovation are also likely in alcoholic drinks, as consumers downtrade to mass products, in more affordable pack formats.

Instances of product shortages were evident, as consumer behaviour shifted to at-home consumption. The demand for products used in home baking peaked, leading to stock issues worsened by some raw material shortages. For example, Mondelez’s products were noticeably absent from shelves for some time. Price increases for confectionery were also evident as can be seen in the median prices for chocolate confectionery: 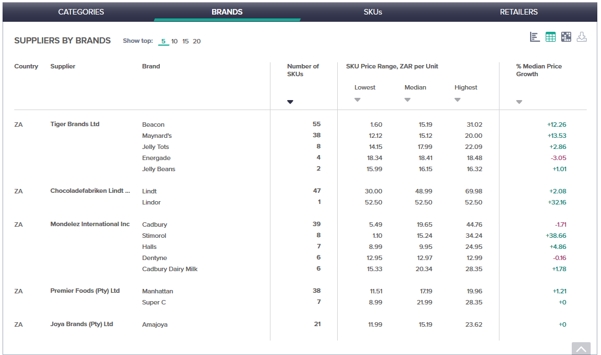 Source: Euromonitor International Via Pricing system 11 April to 11 May 2020

In the initial lockdown phase, consumer foodservice was closed entirely, reopening for deliveries during “level 4” in May. This, in addition to general social isolation, has led to channel shifts. Leading online food delivery services converted their operations into “essential good” delivery. For example, Mr D Food, which saw its operations converted into food and medical delivery through partnership with forecourts and Medirite pharmacies.

Consumer foodservice is only expected to start recovering in 2021 with smaller outlets bearing the brunt of the economic fall-out, with many facing closure.

Beauty and personal care struck as focus shifts to essentials

The South African beauty and personal care industry is worth USD3.8 billion, the Sub-Saharan African region’s largest market. Discretionary beauty such as colour cosmetics and fragrances were impacted by supply and demand shortages. However, hygiene products such as hand sanitisers and wipes experienced increased demand. DIY products such as hair colourants and at-home perms and relaxants have seen an increase as hair salons remain closed. Going forward, salon services are also likely to be “nice-to-have” due to declining disposable income. Shopping behaviour is set to shift as price-sensitive consumers seek the best value for money.

Premium products will be the hardest hit as the consumer shift to essential goods is likely to continue this pattern over the medium term. In addition, wealthy travellers from neighbouring African countries, an important driver of premium and luxury sales, are unable to visit South Africa at present, adding to a decline in premium sales. The industry, expected to grow at 3% in value terms prior to the pandemic, will now contract by 1%.

M-commerce is increasingly part of omnichannel marketing, as WhatsApp is used by companies such as Perfect Shade Cosmetics for placing orders.

Bleak future for apparel with store closures on the horizon

Apparel and footwear, under pressure before the pandemic, is set to decline further with all apparel and footwear stores closed during the initial lockdown period. As lockdown rules are eased, a temporary resurgence of demand is expected as consumers stock up on winter clothes.

Going forward, cautious spending and value for money will drive purchasing behaviour. Further consolidation is expected as additional retailers close permanently. Although the immediate outlook remains bleak, as Euromonitor International expects the apparel market to contract by 4% in value terms during 2020, recovery is expected in 2021 as consumer confidence and demand increases somewhat.

The lockdown boosted short-term demand due to stockpiling of toilet paper and cleaning materials. These include dishwashing products, as consumers spend more time at home. This is expected to persist in the short to medium term as consumer foodservice remains closed for on-trade consumption.

Popular as a low-cost multifunctional cleaning product, bleach has seen an increase in sales as households seek to prevent the spread of the virus. High-income households have driven growth in-home care disinfectants and other task-specific cleaners, such as kitchen and bathroom cleaners.

Post-lockdown, a degree of downtrading can be expected due to economic hardship. Volume growth should dominate value growth, as consumers switch to more affordable, private-label alternatives.

Looking ahead, consumer behaviour and the response by retailers and manufacturers will be characterised by certain lasting changes as the “new normal” sets in:

• Value for money will be king: Consumer purchases will not be driven by personal choice, but by necessity as downtrading becomes more entrenched. The long-term economic impact of COVID-19 will be the deprioritisation of premium as economic uncertainty remains over the medium term.

• Increased digitalisation and adoption of e-commerce: The pandemic has served as a catalyst for hastened e-commerce adoption, set to continue with a permanent uplift in e-commerce. A different strategy for lower-income consumers will be required, as m-commerce takes greater prominence.

• Packaging and product Innovation adapt to changes in demand: Packaging better suited to in-home consumption and offering value for money is likely to be popular. Changes in product formulation to meet the needs of cost-conscious consumers may also be witnessed.

How Have Mobility Patterns Changed During the COVID-19 Pandemic?

Boom or Bust: Birth Rates During the Pandemic

The New Normal: The Rise of Affordable Flagship Products

Products that offer premium features without the high price tags are becoming popular. What are the factors driving this trend and how are companies like Apple…

Latin America has among the largest forest and biodiversity availability in the world, but poor environmental protection and rapid forest loss threatens the…

Exploring the Evolving Landscape of Dermocosmetics