Plant-Based Producers Have Demographics On Their Side

Alternatives to meat are booming. Consumers are seeking more sustainable and ethical substitutes for animal products, and product after product has sprung up to meet demand. Health concerns are also driving growth, and developments in lab-grown food have the potential to fundamentally reshape how food is produced.

Major consumer motivations for increasing plant-based eating include health, sustainability/environmental concerns and, to a lesser extent, issues around animal welfare. It is also true to say that the impact of the global pandemic of 2020 was positive for these products. They benefited from consumers’ increased focus on health from food; shelf life (vs animal-based alternatives); demand for novelty as a result of increased cooking; and the fact that alternatives avoided meat’s links with the virus (ie how it transferred to humans, and widely publicised high infection rates at meat processing plants worldwide).

While the number of vegan or vegetarian consumers is small globally, the number of people who are trying to limit their animal product consumption is much more significant – for meat this has now reached 23% (approaching one in four) globally. It is these flexitarian consumers who have been driving the shift from animal towards plant.

There is also a clear age dimension here, as younger adults are generally more likely to be eschewing animal-based food in general.

On closer analysis, it becomes clear that the youngest adults are the core consumers for plant-based meat alternatives. Only 25% of 15-29-year-olds never eat alternatives, compared to 51% of those aged 60+. 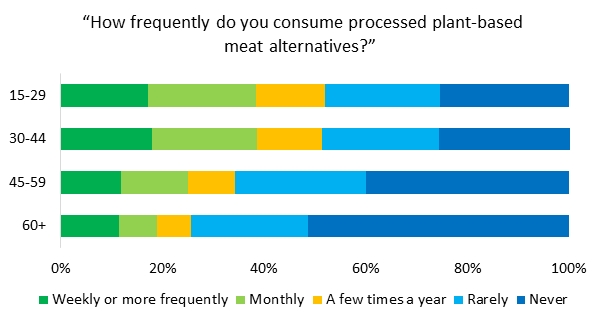 Get older adults on board…

As they are currently the least likely to be engaged, especially regarding sustainability and animal welfare, convincing significant numbers of older adults to leave animal-based products behind may be a difficult task. But that isn’t stopping brands from trying. Milk alternative Oatly’s “help-Dad.com” campaign has focused on this by encouraging children/young adults to convince their fathers to abandon traditional dairy. The company has singled dads out because their own research shows men aged 44-75 are the least likely to be “environmentally-friendly” and over half drink milk every day.

…or just give it time

While attempting to harness the energy that the young have brought to sustainability and social change movements worldwide in order to change older adults’ behaviour may work, ultimately the fact that demographics are on the meat/dairy-free producers’ side may be more important. Young adults are key drivers of the plant-based eating trend; they are also most likely to be at the extreme end of animal agriculture restrictions (eg vegan). In addition, their cultural ties to long-established food systems are weaker than those held by older adults, and indeed innovations which may seem a step too far to some (such as cell-cultured meat) may not hold such fear for the younger generation. As such, the seemingly insurmountable challenge posed by the establishment of animal-based food production should diminish over time – not least because 60% of these young adults believe they “can make a difference to the world through [their] choices and actions”.

For more on alternatives, who eats them and why, please see our on-demand webinar Plant-Based Eating and Alternative Proteins.