In April 2021, Euromonitor ran a webinar Quantifying Megatrends: Expanding Your Portfolio in the Right Spaces, which discussed Euromonitor’s new tool for quantifying megatrends, and shared the methodology behind the data and the key findings. Premiumisation is a key megatrend identified by Euromonitor International’s network of industry, country, economic and consumer experts as having the furthest-reaching impact on industries and consumers in the future.

Slowing volume growth has led brands to seek new ways to drive value expansion. The concentration of wealth and income has created new demand for high-end offerings and consumers everywhere demand more choices and more tiers, allowing them to spend more on what matters most. Global mass brands are giving way to niche brands and personal “brand portfolios,” as consumers at all income levels seek products, services, and experiences that reflect their personal identity. Whilst the pandemic drove a major contraction in overall spending, the trend is expected to recover strongly going forward, particularly in traditional strongholds like the US and China, where significant wealth and income concentration will continue to support spending by well-off consumers, whilst providing a template for aspirational spending across a wider swathe of the population.

The pandemic has seriously disrupted spending on Premiumisation across many categories, of course, yet the underlying dynamics driving the trend remain in play, particularly among higher-income consumer groups. In many markets, in fact, soaring stock market and real estate valuations have left many consumers in the wealthiest 10-20% better off financially than they were pre-pandemic. The key difference with the pre-COVID era is a massive contraction in spending on experiences (e.g., travel, foodservice), with a smaller pullback in spending on “public-facing” items such as cosmetics. Going forward, all of these segments are expected to recover, yet the shift towards personal consumption and private spaces is likely to persist.

Consumers who have continued to spend on fortified and functional products, whilst boosting their spending on pet care, coffee pods, and premium drinks will not return 100% to previous habits, particular in areas where the quality of at-home consumption has been significantly upgraded. The post-COVID era means more consumers spending more of their working lives at home, driving a spatial reorientation of away-from-home activities, as well as much greater competition for consumer attention and spending. 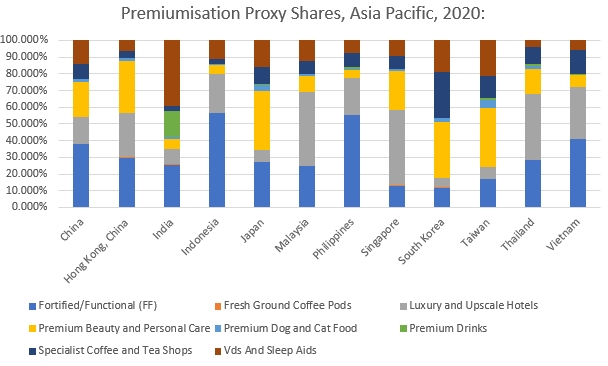 How to drive spending on premiumisation?

Similar to other Megatrends, China and the US will remain the primary drivers of Premiumisation spending and trends over the next five years, with China in particular quickly becoming not just a center of spending, but a regional trendsetter in a way it was not as recently as five years ago.

Outside of the top two, India stands out as the fastest-growing market over the next five years, uniquely underpinned by vitamins and dietary supplements (VDS) and sleep aids, which collectively account for around 40% of total proxy spending on premiumisation in India, by far the highest percentage in the world. Indeed, spending on health is an important first step on the Premiumisation ladder, with consumers in markets like Indonesia and Nigeria likewise set to expand their consumption of functional/fortified products and VDS/sleep aids over the next five years. 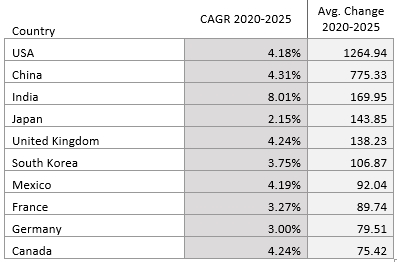 More broadly, this emphasis on personal health and private activity is expected to become a larger component of Premiumisation as a concept over the next five years. Less time in the office could lead to less spending (or different spending) on skincare and cosmetics routines, whilst upgrades to home consumption seen during the pandemic (better coffee machines, new cooking equipment, other countertop devices) will impact away-from-home spending for years to come. Finally, the continued specter of disease and illness among an aging population will increasingly boost investments into long-term health and function.

Diversity and Inclusion: Talking the Talk, Walking the Walk

Digital Living: Who are the Next Billion Internet Users?