Tackling obesity and the impact of sugar intake on health are pressing concerns for many governments, and sugar taxes often look like an appealing solution. In recent years, many European countries, such as the UK (2018) and Poland (2021), introduced or reviewed their regulations on carbonated drinks, challenging the industry and accelerating the shift towards sugar-free and calorie-free soft drinks. Among the latest initiatives, in January 2021 Spain implemented a VAT increase for sweetened and sugary drinks, from 10% to 21%. This followed the first attempt at a sugar levy in the country, which had been introduced in Catalonia from May 2016 to April 2018.

UNESDA, the European Association representing soft drinks producers, recently announced new health and nutrition targets. These include a commitment to reduce the average added sugar in soft drinks by a further 10% from 2019 to 2025 across the EU-27 and the UK. According to UNESDA, this will result in an overall reduction of 33% in average added sugars over the last two decades, considering the average reduction registered from 2015 to 2019 of 14.6%, and 13.3% from 2000 to 2015. These new commitments will require a range of actions from soft drinks manufacturers, from reformulating their recipes to reduce the sugar content, to introducing low calorie options and promoting smaller packages to support moderate consumption.

In addition, UNESDA reviewed the guidelines with regard to marketing and advertising to children. The current limit on advertising soft drinks to children younger than 12 years old will be extended to 13 years old. Meanwhile, it still keeps in place the ban on the sale and advertising of any soft drinks in primary schools in the European Union. In addition, only no calorie or low calorie drinks may be sold in secondary schools, and only in unbranded vending machines.

The impact of the VAT increase in Spain

Spain has already exceeded the commitment announced by UNESDA. Between 2016 and 2021, the reduced sugar soft drinks segment recorded a positive CAGR of 4% in the Spanish market, accounting for 22% of retail value sales in 2021 (excluding bottled water). In addition, according to Euromonitor Product Claims and Positioning, 12% of carbonates marketed online in 2020 were low sugar, no sugar or no added sugar. All of this was the result of the industry’s commitment to respond to consumers, who are increasingly opting for drinks with less sugar and fewer calories.

Although the latest initiative of the Spanish government to implement a rise in VAT from 10% to 21% not only covered sugary drinks, but also artificially and naturally sweetened beverages, the performance of reduced sugar options has not been negatively affected. Indeed, the new taxation led to an increase in terms of unit prices across all soft drinks categories, not favouring any one segment over another. However, it still resulted in an increase in consumer demand for reduced sugar soft drinks, as these are perceived as a healthier option than traditional sugary drinks.

The Spanish government aimed to raise EUR491 million from the increase in VAT on sugary drinks in 2021. Between January and August 2021, the measure raised EUR137 million, with an estimate of reaching EUR340 million in the year overall. The median price per SKU of soft drinks marketed online in Spain grew by 18% between September 2020 and October 2021 (Euromonitor, VIA).

Manufacturers have continued to invest in innovation to reduce the average level of added sugars. Out of the 14 launches made by Coca-Cola in the Spanish market during 2020, a total of 12 were sugar-free beverages. According to Euromonitor Product Claims and Positioning, among all health and no artificial ingredients claims, “natural” and “no sugar” show the largest penetration in soft drinks, with the latter recording the highest growth between 2019 and 2020. There was also an increase in the use of the “no artificial sweeteners” claim over the same period. Sweeteners are still an essential ingredient for reformulating some of the most popular soft drinks in the market. In terms of categories, the “no sugar” claim shows the largest penetration in low calorie cola carbonates, with 48% of total SKU count, while no sugar tonic water options are still not very popular in the segment. However, new product developments have been launched in 2021 in the Spanish market, such as Royal Bliss Vibrant Yuzu Tonic Water Zero Sugar by Coca-Cola. 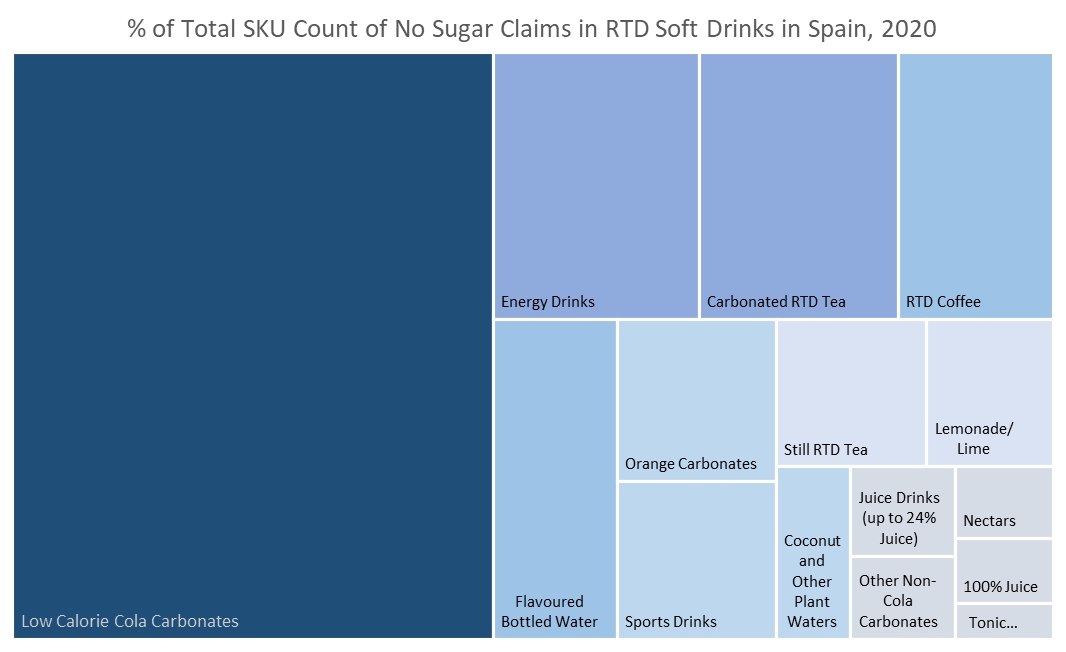 The VAT increase currently affects only off-trade sales. However, the soft drinks industry is committed to also giving preference to no calorie and low/no sugar options in cinemas, theatres and vending machines in the coming years. In 2020, 21% of the sugar consumed in Spain in terms of grams per capita per day from soft drinks was from foodservice. Manufacturers are expected to accelerate the shift towards reduced sugar variants to adapt to consumer demand between 2022 and 2026.

In September 2021, PepsiCo reviewed its beverages portfolio in Spain, launching seven varieties of its key brands with zero sugar (Pepsi MAX, Pepsi MAX without caffeine, Pepsi Light, Kas orange Zero, Kas lemon Zero, 7UP Free and Aquarade Zero) and two references in which the added sugars have been reduced, such as Pepsi, now with 3.6g less added sugar per 100ml, and Lipton. The aim of the company is to reduce the average level of added sugars in its range of soft drinks in Europe by 25% by 2025 and 50% by 2030, with Pepsi MAX and 7UP Free leading its beverage portfolio. Meanwhile, in line with its commitment to reduce sugar, Coca-Cola continues to work to provide consumers with smaller packaging, such as its line of mini cans, in accordance with the UNESDA directives.

The big challenge for the soft drinks industry will be to innovate and reformulate recipes in order to reduce the sugar and sweeteners in their products whilst maintaining their taste.

Reading the Tea Leaves for 2022 and Beyond

From Energy Boosting to Full Relaxation: The Strengthening of Oppositional Behaviours and Needs

The Future of Energy-Boosting Drinks in Western Europe

Energy-boosting drinks have grown in popularity in Europe, as consumers seek functional drinks that can help improve performance, focus and energy levels at…

Striving for Wellbeing in Drinks and Tobacco: Personal Health Technology and Beverages

Data from personal health technology – wearables, smart fitness machines and apps - is being used to change and improve consumer nutrition and consumption…