Though demand growth of Japanese whisky remains strong in Japan, interest is quickly building elsewhere. Non-Japanese sales of Japanese whisky are now rising at an average pace of 9% annually, according to Euromonitor International. This growth is more than twice as fast as American, Canadian, Irish or Scotch whiskies, all of which are doing quite well in their own rights.

Most of this rise is coming from one of four places: China, France, the Philippines and the U.S. These four countries are expected to collectively account for around 90% of all non-Japanese sales growth in Japanese whisky in the years leading up to 2023. 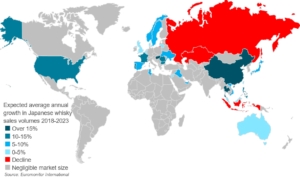 Whisky is one of many premium spirits surging in Asia

China and the Philippines are both seeing demand rise in the context of a general increase in imported spirits. In China sales are projected to grow by an average of 16% annually for the next several years. While quite impressive, that pales in absolute terms behind Scotch, cognac and rum. This highlights the major challenge for Japanese whisky in Asia going forward.

The category cannot rely on the inbuilt geographic advantage. Japanese whisky must position itself as a product whose attributes are worth seeking out. Otherwise, it risks being lost in a flood of novel spirits that are hitting the bars frequented by the region’s rising middle and upper classes.

France and the U.S. are experiencing a different shift. Both are mature markets with consumers that know a great deal about whisky. This has worked out to the detriment of whiskies that are well established but somewhat stagnant, most notably Canadian and blended Scotch. These segments are still large in volume but are declining and struggling to excite a new generation of whisky drinkers.

This restlessness works out well for more emergent segments. Japanese whisky has, of course, been a major beneficiary although the same basic desire for the novel is also boosting segments like blended malt and craft.

The power of Japanese cultural exports abroad (what is sometimes referred to as Japan’s “Gross National Cool”) often sets Japanese whisky apart. In many global markets, but especially in France and the U.S., Japanese animation, cuisine and video games are viewed positively. While serious whisky drinkers are familiar with the merits of Japanese whisky from international competitions and publications, the less-educated whisky drinker will often come into contact with Japanese whisky for the first time in the context of a Japanese restaurant or a karaoke bar.

To continue growing, Japanese whisky will need to keep appealing to both groups: accessible enough to draw in the casual fan of Japanese culture but preserving a strong quality reputation to impress the aficionados.

Japanese whisky remains largely unknown elsewhere. There are a handful of global markets, particularly in Eastern Europe, posting impressive growth rates (9% annually in Ukraine, 12% in Romania, 26% in Hungary) but it remains negligible in much of the world. This is true even in countries with heavy whisky consumption like Brazil, Germany and Mexico.

Given the limitations of supply, this situation will likely endure for some time. Japanese distilleries will struggle to deal with existing domestic and foreign demand as it is. For now, the best option for Japanese whisky is to continue cultivating an image of quality to create excitement while waiting for production to ramp up (shortages may even be paradoxically helpful here, creating an image of Japanese whisky as something rare and truly special).

The world is beginning to appreciate what whisky drinkers in Japan have known for some time, but there remains a long way to go.

The Future of Energy-Boosting Drinks in Western Europe

Energy-boosting drinks have grown in popularity in Europe, as consumers seek functional drinks that can help improve performance, focus and energy levels at…

Striving for Wellbeing in Drinks and Tobacco: Personal Health Technology and Beverages

Data from personal health technology – wearables, smart fitness machines and apps - is being used to change and improve consumer nutrition and consumption…