Plant-based alternatives have revolutionised the food industry, and consumer demand has skyrocketed in the last few years. In fact, 42% of global consumers say that they are restricting their consumption of animal-based products, so manufacturers have risen to the challenge by developing new products and extending ranges across the board. The plant-based dairy industry in particular is one of the largest and most dynamic spaces, with global retail value sales of over USD20 billion in 2021, of which almost USD18 billion comes from plant-based milk.

Euromonitor International’s Voice of the Consumer: Health and Nutrition Survey (2021) reveals that health is the main reason for consumers to follow a dairy-free diet. 42% of consumers globally say that they do so because of digestive health, followed closely by 40% giving the broader reason that it makes them “feel healthier”. This is far ahead of ethical reasons, including environmental concerns and animal rights – both of which are selected by 27% of global consumers.

Overall, health motivations can be related to the bad reputation that has arisen around dairy over the years, as it is now perceived by many as difficult to digest, and its lactose content is not considered healthy, which is playing in favour of dairy alternatives. Indeed, one of the most popular claims featured in milk alternatives is “lactose-free”, with 12.2% of products sold online globally holding such a claim, which is even higher than the 11.3% of products holding a “dairy-free” claim.

Milk alternatives continue to surge in popularity across the globe, but the spotlight remains on Western countries, where there has been substantial absolute growth. Australasia is also key, thanks to high per capita sales.

On the flip side, APAC suffered a very significant drop in sales during 2020 and has not recovered to pre-pandemic levels. This is mainly due to the negative performance of milk alternatives in China, valued at USD5.5 billion in retail sales in 2021 which, given the large size of the market, has a significant impact on the overall performance of both the region and the world.

This decline is mainly attributed to two reasons. One has to do with consumers’ perception of milk alternatives. In China, plant-based protein is not considered to be as nutritious as animal protein, therefore the increased demand for health benefits driven by the global pandemic has not had such a positive impact on the category.

Secondly, important consumption occasions for milk alternatives, especially non-soy variants, occur as part of gifting (e.g., during Chinese New Year) and for consumption during gatherings; both these occasions were interrupted in 2020 due to the pandemic. In 2021, social gatherings have still not fully recovered, preventing the category from rebounding to pre-pandemic sales (in absolute terms). 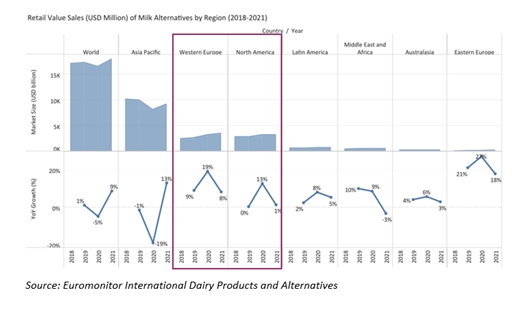 Despite the fast growth of plant-based milk, it is still rising from a small base. There is a big gap in the per capita penetration of milk alternatives vs cow’s milk across all regions, and this brings a big opportunity for plant-based milk manufacturers to capture more consumption occasions and gain ground in the years to come. 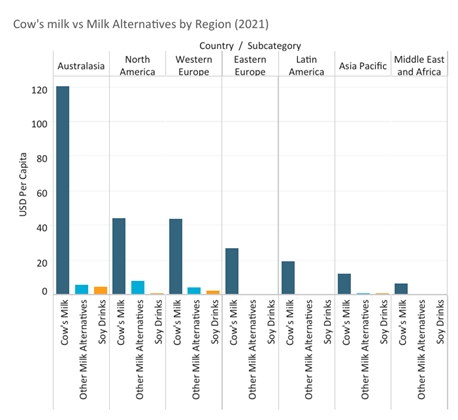 Regarding ingredients, oats has been one of the winners in the plant-based milk space. On the one hand this is because oats are more sustainable than other alternatives – e.g., almonds need a lot of water to grow, so questions around sustainability have been raised in markets like the US. On the other hand, taste is crucial, and oats have a neutral flavour that is liked by consumers and makes oat milk a great alternative for coffee aficionados, as it does not overpower the flavour of the coffee like other types of plant-based milk. Health credentials are also associated with oats in general due to their content of prebiotic fibre, boosting an already good reputation.

However, new ingredients are flourishing, and new product launches have hit the shelves, including milks made of barley, chickpeas, sunflower seeds and even potatoes. Interesting recent launches include US-based Take Two barley milk, the first to use upcycled barley from the beer industry; and Swedish company Veg of Lund’s launch, DUG, the first potato milk in the market. The latter particularly stands out due to its sustainability credentials, having a lower carbon footprint, using less water, and needing less land compared with rival ingredients such as oats and almonds.

What is next in the plant-based milk aisle?

In the buoyant plant-based milk space, there are steps being made towards more clean label options and the improvement of nutritional properties to be competitive with cow’s milk. Other areas being developed include replicating the versatility of dairy, as with Nestlé’s recent launch Wunda pea milk, that can be used for drinking, for coffee or for cooking. A step further may be taken by Danone’s Silk Next Milk and So Delicious Wondermilk, both planned to launch in January 2022 in the US. These promise to replicate the sensorial experience of dairy, mimicking the taste and mouthfeel of milk while using plant-based ingredients.

Looking further forward, significant attention is being paid to precision fermentation, which is able to exactly replicate dairy ingredients such as whey and casein by using microorganisms like yeast in a fermentation process. Perfect Day is one of the companies pioneering this technique, and its alternative milk product is being trialled by Starbucks. Finally, longer-term technology is cell-cultured milk, which consists of replicating mammary gland cells in a lab that can lactate milk. A close eye should be kept on these techniques, as they have the potential to disrupt the dairy industry in the long term.

For further insight, head to the webinar Rise of Plant-Based Eating and Alternative Proteins: Understanding Flexitarians and Growth Trends, or reach out to Maria Mascaraque to learn more about this fast-growing industry.