Across Africa, informal retailing continues to play an important role, even as modern retailing and more lately, e-commerce, expand alongside traditional stores. Acknowledging informal retailing’s importance, busting the myths around who shops there, and understanding the interplay of economics, the state of supply chains, consumer preferences and local culture in each market will help manufacturers position their brands in this important sector in sub-Saharan Africa. Euromonitor International estimates the combined value of traditional, modern, and e-commerce retailing in sub-Saharan Africa at USD380 billion in 2021, contributing 20-50% of GDP on average. 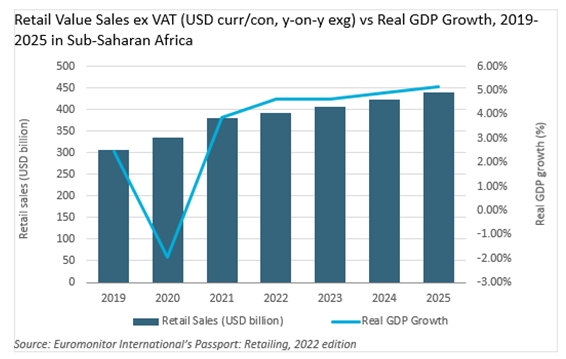 Informal retailing, despite its important role in regional retailing, is much more difficult to quantify. Statistics from the International Labour Organization indicate that informal employment accounts for over 80% of total employment in some economies in sub-Saharan Africa, and informal output accounts for more than 50% of the region’s overall official GDP, indicating the sector’s broad significance.

What is informal retailing and how does it fit into the region’s retail environment?

As defined by Euromonitor International, informal retailing involves trade conducted by unregistered or unlicensed retailers, which are typically not reported to tax authorities. In general, such retailers operate primarily (but not exclusively) as street hawkers, open market stalls, or informal shops, making them more difficult to monitor than permanent outlets. Informal traders are common across sub-Saharan African cities and rural areas. Spaces for trading can range from as little as 1 sq m up to 30 sq m, depending on the setting. Due to their small footprint, traders are located closer to consumers, along transport routes and hubs, or within local communities. Furthermore, proximity extends to knowing and stocking customers’ preferred brands and products, and offering credit to loyal customers.

The informal market reflects where many consumers typically shop, especially for food

Regardless of income levels, most consumers still buy groceries through informal channels, even though modern grocery retail outlets have increased in number across sub-Saharan Africa. The informal channel also handles a substantial proportion of sales to Bottom-of-the-Pyramid (BOP) consumers. BOP households typically earn less than USD2,500 annually, and in 2021 they represented more than 20% of the sub-Saharan African population.

Interestingly, the informal channel caters to consumers of all income levels and is popular with people from all economic backgrounds due to its convenience, credit-based payment flexibility, fresh foods, and lower prices. Outside of South Africa, industry sources estimate that informal channels account for between 40% and 90% of total food sales. Businesses seeking to expand their distribution networks and access the region’s growing consumer market will have a considerable amount of market potential by selling in the informal market.

Are products found in informal channels different from those found in formal/modern channels?

Logistical costs and lead times required to access markets in sub-Saharan Africa can make it difficult to reach the last mile of distribution. Informal channels are stocked through a complex network, which includes distributors, agents, manufacturers (brands), farmers, and modern retail outlets. The supply chain is often highly fragmented, but partnering with reputable local companies which have established connections throughout the value chain allows companies to reach consumers effectively and efficiently. 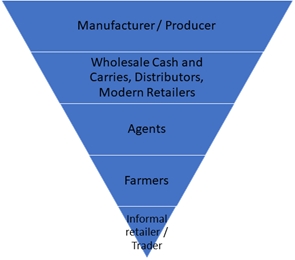 Informal retailing is here to stay

Africa’s retail landscape is complex, making the last mile to intermediaries an important way of reaching underserved populations. Development of diverse products and services that meet different socioeconomic needs is essential to the growth of the region. Informal shopping is likely to remain relevant for the foreseeable future as it is an integral part of sub-Saharan Africa’s food economy, and consumers’ shopping habits.

Informal channels are also prevalent in other emerging markets. By understanding how and where a product is consumed in the region, as well as the types of informal traders and their specialties, brands can develop more targeted product offerings, which is necessary for developing a successful route-to-market strategy, making an informal retail strategy as important as it is for modern retail.

For further information about this channel, please refer to the strategy briefing, Opportunities in Informal Retailing in Sub-Saharan Africa.

Why Walmart Could Win On-Demand Delivery Race in the US

The Changing Face of Customer Loyalty

The importance of customer loyalty has grown in a time of disruption and rising uncertainty. A central place is taken by consumer-centric strategies, retention…

Social media platforms have established relevance beyond communication. Rapid evolution has increased their importance in the new consumer journey.…

This report explores the global on-demand delivery sector, examining how the COVID-19 pandemic fuelled rapid growth in the sector and how the macroeconomic,…