The luxury goods industry is displaying strong signs of growth and is set to surpass pre-pandemic sales figures by the end of 2022 in key GCC (Gulf Co-operation Council) countries of the United Arab Emirates and Saudi Arabia. In particular, according to the latest data from Euromonitor International, fast-moving consumer trends, changing macroeconomic and demographics indicators and shifts in consumer behaviour are creating opportunities within this industry in Saudi Arabia. Luxury brands need to understand the impact of these changes, which will be essential for businesses to create winning strategies as they attempt to penetrate or expand across markets.

As part of a concerted campaign to promote its local heritage and capitalise on its own affluence, Saudi Arabia is placing greater emphasis on local fashion and luxury industries. The Fashion Commission, established in 2020 and part of the Ministry of Culture, aims to create a thriving fashion space to promote local talent, designers and international brands, whilst encouraging long-term awareness of culture and heritage. Personal luxury goods such as designer apparel and footwear, leather goods, jewellery and timepieces all form an integral part of this.

Saudi Arabia stands out as a key wealth market, which, according to Euromonitor International’s latest data, is home to over 117,000 millionaires in 2022 (individuals with net wealth between USD1-5 million) and hence there is a natural fit for luxury goods. It also made a strong comeback from the COVID-19 pandemic, benefiting from strong annual real GDP growth of 7.3% in 2022, while inflation, at 2.5% for 2022, remains comparatively low compared to other key luxury goods markets. The quick recovery has also been driven by government initiatives of large-scale investments in energy as well as non-energy sectors. Among others, Saudi Arabia has continued to successfully implement projects such as the future city of NEOM and festivals such as the 11+ Saudi Seasons, including Jeddah, Riyadh, and Al-Ula. The Crown Prince and Prime Minister, Mohammed bin Salman, revealed plans to make Riyadh one of the top 10 richest and economic cities in the world by 2030.

According to a recent global report  Five Trends Shaping the Global Luxury Goods Landscape, published by Euromonitor International, the global luxury goods industry is incorporating technology, digitalisation and culture with fashion whilst maintaining exclusivity to remain relevant. Generation Z consumers are a particularly important catalyst of this trend. Saudi Arabia stands out as a youthful market overall, where the Gen Z population stood at eight million in 2021, whilst almost half of the total population is below 29 years of age. Euromonitor International’s Voice of the Consumer: Lifestyles Survey revealed that 13% of Generation Z in Saudi Arabia are willing to pay more for premium/luxury brands when purchasing apparel or footwear compared to 10% in 2021, while Generation X stands at 11% in 2022 compared to 18% in 2021. Among other factors, this signifies shifting preferences, priorities and demands of local luxury consumers towards quality, heritage and craftmanship.

Luxury label Hugo Boss has rebranded on a local level to be a better fit with the younger consumer groups. Indeed, the BOSS label essentially targets millennials, whilst HUGO mainly targets Generation Z. Similarly, the launch campaign for this new branding was shot in the region and included the official brand ambassador and TikTok star Khaby Lame. This created huge buzz around the brand with an unprecedented level of traffic heading to associated digital platforms.

Luxury companies that invest in tailored regional marketing strategies and successfully weave local brand stories and cultural relevance into their campaigns are expected to be more successful than those that follow a standard one-size-fits-all template. This is leading to fashion, art, and food becoming increasingly developed to offer a taste of Saudi culture.

Held in 2021, the Dior Beauty “Sauvage” event held at Al Ula against the backdrop of Elephant Rock complemented the fact that the fragrance was inspired by the magical twilight hour in the desert. This concept led to greater interest from local consumers, both residents and tourists, as the government makes Al Ula a visitor hotspot. In 2022, Dolce & Gabbana also held its “Alta Sartorifa Show” in Al Ula. 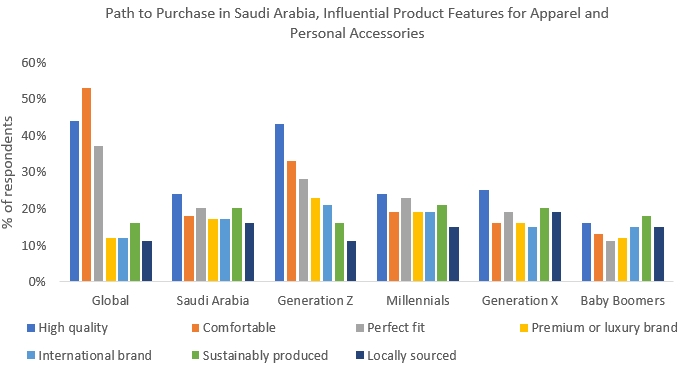 Since the outbreak of the pandemic, a notable distinctive shift in consumer spending has been observed among locals and residents compared to international tourists. In 2022, Saudi Tourism Authority attracted 62 million visitors to the country, with domestic visits accounting for almost 33 million and international visits reaching 29.5 million. As Saudi Arabia continues to foster its rich heritage and culture to its youth and the world, the high-end lifestyle is part of the holistic consumer experience. Retail development as part of Vision 2030 also promotes this. In recent years, new concepts for entertainment and shopping destinations such as Jeddah Park and Riyadh Boulevard, alongside new branches of luxury stores, including Chanel Beauty and Tiffany & Co, have emerged.

Outlook and winning strategies for luxury goods in Saudi Arabia

According to data from Euromonitor International, by 2030, Saudi Arabia is expected to be home to 203,000 millionaires and 22,000 HNWIs (High-Net-Worth Individuals). This will only go further to strengthen sales of luxury goods, whilst also benefiting spending on large-ticket items such as luxury cars, luxury real estate, hotels and hospitality.

Decision makers should follow the path of Vision 2030, which is a roadmap drawn up by His Royal Highness the Crown Prince, to strengthen the strategic position and investment power and to create a more sustainable and diverse future and economy for Saudi Arabia. They need to understand who the luxury consumer is, what they want to buy and how they want to buy it. The graphic below outlines some of the key factors to be considered when answering these questions.

For further insight read our reports, Global Wealth and Luxury and World Market for Luxury Goods.

Key Trends in the US Childrenswear and Children’s Footwear Market

US childrenswear and footwear showed greater resilience than wider apparel and footwear facing the COVID-19 crisis in 2020 and economic uncertainties in 2022.…