In 2022, 60% of the global population was connected to the internet. Increasing rapidly, the online penetration globally is expected to reach 71% by the end of 2027. This means there will be one billion new internet users across the globe during the next five years. Countries in Southern Asia and Africa will be the main contributors to the next billion internet users, including India, China, Pakistan, Indonesia and Nigeria. Growing internet access in emerging countries will help to fill the inequality gap. Internet access ensures economic development as well as essential services to populations such as education, healthcare, employment, government services and others. For businesses, it is important to understand who the new users are, where they come from, their needs, priorities and activities while using the internet. The following will highlight the main demographic and economic drivers of the next billion internet users. 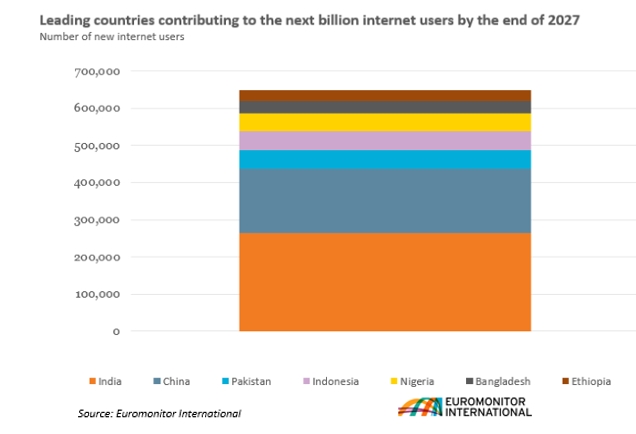 The next billion internet users will primarily come from economically fast-growing emerging and developing nations. As a result of steady economic growth, a growing middle class, alongside rapidly increasing investment in network infrastructure and digital transformation, the connectivity divide between these countries and developed economies will further narrow. Emerging and developing economies are quickly reducing past barriers to online participation such as the lack of network accessibility and access to affordable devices necessary to connect to the internet. 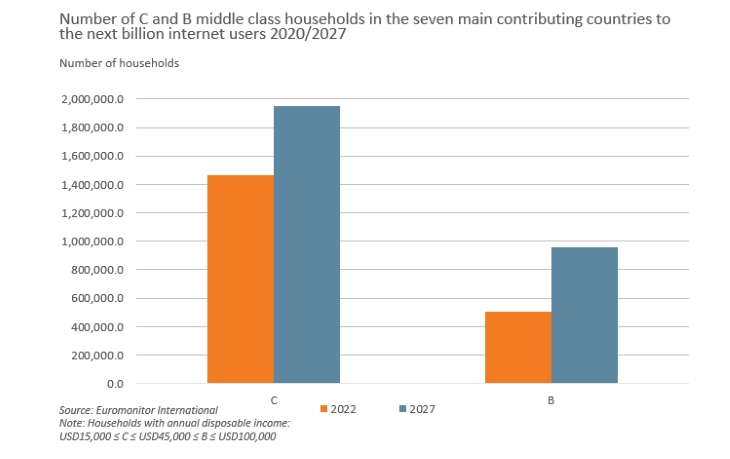 Urbanisation is a particularly strong driver for the number of internet users in emerging and developing countries. Despite improvements, there remains a considerable rural-urban gap in terms of internet infrastructure, level of education and income opportunities, especially compared with advanced economies. Hence, among the seven main contributing countries to the next billion internet users – Bangladesh, China, Ethiopia, India, Indonesia, Nigeria and Pakistan – there is an inverse correlation between the percentage of rural population and the percentage of population using the internet. Therefore, rural consumers moving to cities have a significant impact on the rising level of internet connectivity.

In advanced economies, urbanisation and the emerging middle class are largely negligible regarding new internet users. Instead, these countries will see a further increase in internet users, especially amongst older demographics.

Ageing consumer base of internet users

The disconnect between consumers aged 60+ years and technology use is narrowing, with a considerable impact on the number of internet users globally. This particular demographic is increasingly comfortable with using the internet. During the pandemic, it kept them connected and able to access the products and services they needed, hence positively impacting their physical and mental health. The development and adoption of digital skills by consumers aged 60+ years has effectively promoted active ageing. Prior to the pandemic, the trend was more prevalent in developed countries. However, in many emerging and developing countries, older internet users will be one of the most significant groups in terms of contributing to new internet users over the forecast period, as they use the internet in a different way compared to younger generations. They are less active in gaming and social media, yet they are actively browsing, shopping and obtaining support such as digital health. The technology gap between generations is shrinking due to the focus by both businesses and government initiatives to make internet access available and user-friendly for a wider target audience.

The rise of the next billion internet users in emerging economies provides vast business opportunities for companies to be able to reach these newly-connected consumers in those markets. However, a strengthened footprint in these key markets alone will not be sufficient. In addition, it will be critical to consider the difference in online behaviour and diverse consumer traits across different markets. Therefore, to benefit from the emergence of the next billion internet users, it will be key to identify specific needs based on country, region and consumer profile.

Find further insights into this trend in the following report Megatrends: Digital Living - The Next Billion Internet Users

Diversity and Inclusion: Talking the Talk, Walking the Walk