Most markets have emerged from strict pandemic restrictions in 2022, but the expected shifts in sales of staple foods were disrupted by surging inflationary pressures around the globe, and these pressures significantly worsened with Russia’s invasion of Ukraine. As populations continue to increase and climate change exacerbates production uncertainty, producers are navigating a post-pandemic landscape characterised by higher demand, rising costs and ever-greater challenges.

The impact of inflation has borne down strongly on staple foods. Drivers such as rising costs of raw materials, labour, energy and transportation have forced increases in prices of food across the board. Staple foods have been hit particularly hard, however, as Russia’s invasion of Ukraine significantly impacted the world’s grain supply, and rising agricultural input costs have driven up animal feed costs. As a result, major staple foods categories – e.g., bread, other baked goods, breakfast cereals, pasta, noodles and processed meat – have been subject to pressures greater than those suffered by other categories, and prices have soared in many regions.

And, due to the nature of staple foods – which are the backbone of diets, less easily substituted or dropped from shopping baskets than more discretionary foods, such as confectionery or desserts – consumers have been less able to avoid these costs. In the UK, for example, the Consumer Prices Index from the Office for National Statistics recorded a price increase of 34% year-on-year for pasta in October 2022, and 28% year-on-year for flour and cereals.

The world’s wheat woes continue. Global grain prices surged on the back of the invasion, but in July 2022, a deal (brokered by Turkey) was reached to allow some Ukrainian exports to resume through the Black Sea. However, as of mid-November 2022, Ukraine’s Agriculture Ministry data showed exports of almost 15.6 million tonnes for 2022/2023, down 30.8% year-on-year (22.5 million tonnes). In addition, a number of countries around the world, fearing the impact at home, restricted their own exports, further driving up global prices. 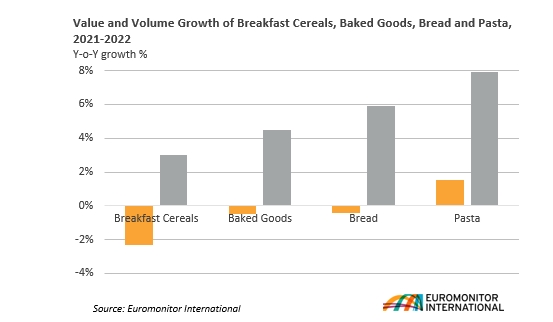 Meat production is increasingly in the firing line

In a context in which increasing numbers of consumers are looking to reduce the amount of meat they consume (23.2% globally in 2022, according to Euromonitor International’s Voice of the Consumer: Health and Nutrition Survey), Russia’s invasion of Ukraine has driven up animal feed prices through the increased costs of fertiliser (an estimated third of all agricultural land worldwide is given over to growing food for livestock). In addition, 2022 has seen the worst-ever epidemic of avian flu across many markets, and meat production is increasingly becoming part of the discussion regarding global efforts to combat climate change. While activists were disappointed with the outcome of the November 2022 United Nations Climate Change Conference (COP27) in this regard, it did feature a Food and Agriculture Pavilion, to include the “transformation of agrifood systems…as an important part of the solution to the climate crisis”. This was the first such COP event to do so.

Where, when and what we eat continues to evolve

In 2022, the pandemic-driven major shift in the location of eating occasions has continued to evolve. Early in 2021, lockdowns/curfews, the shutting down of restaurants/cafés/bars and other restrictions on consumer movement (such as the closure of schools, workplaces and other institutions) forced a rebalancing of food purchases towards retail sales. Simply put, people had to buy more so they could eat more at home. For many, the middle of the day eating occasion moved from the workplace (or near the workplace) to the home. And, while restrictions based on halting the spread of COVID-19 have eased across much of the world, this particular shift has not returned to the pre-pandemic position. Many workplaces and employees have embraced hybrid working since 2020/2021, demonstrating that businesses have adapted successfully.

For staple foods, the implications are significant – not only for sales of foods that may be used to make a lunchtime meal (pasta, rice, processed meat, processed vegetables, etc.), but also for breakfast foods. In the latter case, some workers have more time to spend on breakfast than before – indeed, some may be eating breakfast at home when this was not previously the case. So, not only does this impact the amount of food being purchased, but also the types of food. The seemingly relentless march towards making everything possible to eat on-the-go, seen in previous years, has fallen away.

At the global level, sales of plant-based meat substitutes have slowed significantly, hurt by negative growth in the US, the largest single market across the globe. The reasons are varied, but include unrealistic expectations causing missed financial projections, supply issues, too many products of variable quality, and high food price inflation. Although this does not mean growth will not resume, 2022 has dented the plant-based meat phenomenon. 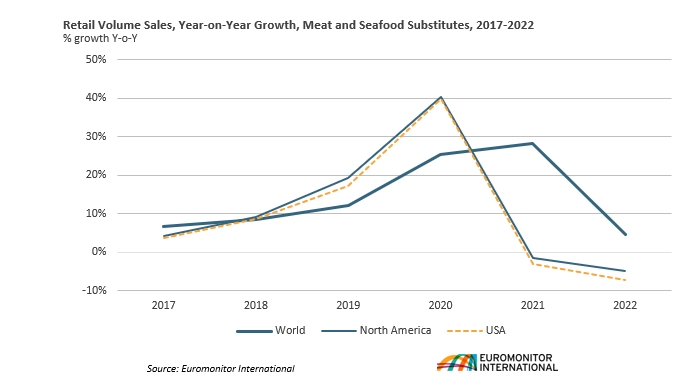 For more on these trends, plus detail on sales of staple foods around the world, please see our report World Market for Staple Foods.

Asia Pacific remains the largest region globally for rice, pasta and noodles. Positive growth has continued to be seen in 2022, in spite of price increases…