Single-person households were the fastest-growing household type globally in 2010-2019, expanding by 31%, with nearly half this growth in absolute numbers attributable to Asia Pacific. Single living will gain further popularity over 2019-2040, due to both long term demographic trends and growing economic independence, and Asia Pacific will remain the most significant driver for singleton-related consumer goods. One in ten households globally is forecast to be both Asian and single person in 2040.

More solo than ever

In 2019, Asia Pacific posted the highest number of single citizens, facilitated by ongoing divergence from the typical composition of the Asian household. The traditional multi-generation household model has given way to the nuclear family and single-person households, where individuals have greater financial security and independence than in the past.

In China, for example, three generations living under one roof has become less common with growing urbanisation, widespread improvements in living conditions and increasing affordability of new dwellings. Coupled with demographic factors like postponement of marriage and delayed childbirth, this resulted in nearly one in five Chinese households being classified as single person in 2019.

Source: Euromonitor from national statistics/UN. Note (1): Countries are selected according to the top 10 largest shares of single-person households in 2019, (2) Data for 2040 is forecast.

Although China, due to its vast population, has led the growth of single-person households in absolute numbers over 2010-2019, the highest proportion of single households are found in the world‘s most urbanised, developed economies. Over the decade, ageing populations, growing divorce and low birth rates, as well as changing perceptions of gender roles, have resulted in one in three Japanese households being single person, putting the country among the top 15 countries globally and highest in Asia Pacific. Over 2019-2040, half of new single-person households globally will appear in Asia Pacific, meaning nearly one in five Asians living alone in 2040; a number hard to ignore.

The rise of the single-person household offers lucrative opportunities for retailers and manufacturers willing to adapt their product ranges and services. Single young professionals who can afford to buy or rent dwellings, middle-aged divorcees without dependants and the senior population, still physically active and financially secure enough to live alone, present a fragmented singletons market, with substantial discretionary income, which was expanding over the past decade. For instance, average consumer expenditure by these households in China has tripled over the last nine years and is set to increase threefold over 2019-2040. 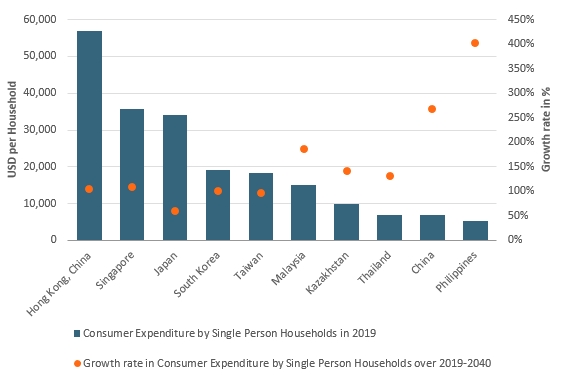 Companies are embracing the transformation and adapting their offerings to single-person households. For example, single-occupancy apartments in Tokyo are an increasingly popular form of dwelling, offering the highest return on investment and lowest vacancy risk. Popularity of solo entertainment and dining activities is also growing. After discovering that 30% of its customers are singing solo, Japanese karaoke chain Koshidaka Kan established ohitorisama booths designed for one person. Meanwhile, the Bar Hitori, opened in 2018, was also specifically designed for “solo-only” customers, coming to the bar alone.

The pandemics and consequent economic slowdown might put a temporary halt on the rapidly expanding single-person households’ number and expenditure. The Economic uncertainty and unemployment will result in more cautious spending, while health crisis and isolation might negatively affect the mental state of consumers leading to trading single living for prolonged stay with the loved ones. Nevertheless, as the environment adjusts to the new normal, long term trends are set to re-emerge, promoting single living.