Latin America is the third most populated region in the world (650 million). It is also one of the most unequal. Prior to the pandemic, the spread of education and the increased demand for unskilled workers in service businesses were both factors in progress combating inequality. This progress has now been interrupted.

Structural problems that have limited the region’s economic growth for decades were exacerbated by the pandemic and will limit prospective recovery in economic activity. A sharp decline in female labour participation – dropping to 46.9% in 2020 - represents a setback to levels previously seen in 2002.

Coronavirus (COVID-19) vaccination rates have increased much faster in advanced economies than in developing economies in Latin America, with Uruguay and Chile being global leaders. As of October 2021, both nations were seeing plummeting case rates after vaccinating nearly 80% of their total population, with a third dose campaign already in motion. Latin Americans spent more time at home during the pandemic, thus demand for products related to hometainment increased. This trend is likely to persist even as the region transitions to the “new normal”.

Job insecurity and reduced incomes will cause consumers to reassess their values and priorities and embrace new consumption habits, looking to trade down on undifferentiated middle-market goods and services so that they can trade up for quality, wellbeing, experience, convenience, authenticity and other values which are increasingly viewed as life priorities.

Trading down to trade up: Chromebook and iPhone SE

According to the Euromonitor Lifestyles Survey 2021 covering Latin America, there is a clear priority towards increasing spending on education and technology as strategic items. Other areas of interest are related to reducing living costs, by acquiring secondhand items, preferring private label or visiting discounters. 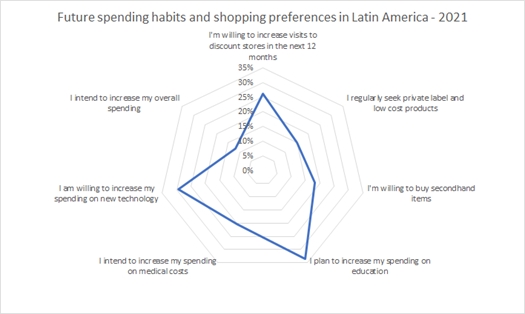 In April 2020, Apple launched the second generation of its low-cost iPhone model SE, which is vastly cheaper than other models. The lower price point could allow Apple to expand its consumer base in Latin America and better compete with Android-based manufacturers such as Google and Samsung, which already offer cheaper iPhone alternatives.

Though this is not Apple’s direct response to the current economic recession, the launch is well-timed, despite some challenges. As the COVID-19 pandemic has resulted in sweeping redundancies and a global recession, consumers - particularly the youth - are becoming more price-conscious and planning to cut back their spending.

Chromebooks, which are produced by several OEMs such as HP, Dell, Acer and Samsung, also offer a cheaper alternative to consumers that have simpler needs and do not need highly advanced features such as a powerful graphic card or an advanced processor. Its focus on the educational sector made a perfect match with the situation experienced during the home seclusion phase of the pandemic, given the context of home-schooling and the high prices of regular laptops, caused by the disruption of the supply chain and the rise of solid disc computers, that became more expensive. Consumers then turned towards cheaper solutions such as Chromebooks or tablets to fulfil their online educational needs, keeping their children connected to the classes while facing economic adversity.

Apple’s premium price positioning means its products typically appeal to more affluent consumers. Samsung is keen on protecting its profitability and will continue to cede market share. Furthermore, there is less brand attachment to Apple among many younger consumers, who tend to be more willing to try out new brands that they can identify with.

The shift towards affordable flagship models is primarily driven by the Chinese brands (Xiaomi and TCL), which offer a diverse product portfolio and have expanded beyond phones to TVs, headphones and others. Other than competitive pricing and digital engagement, these Chinese brands have tailored their products’ designs and features to a specific consumer group (younger consumers). These consumers feel that the products and services are designed specifically for them.

Democratisation of the e-commerce channel in Latin America

Due to confinement and mobility restrictions, e-commerce sales boomed by nearly 60% in 2020 at a total retailing level in Latin America. The growth of e-commerce has not, however, diminished the importance of physical retail channels like electronics and appliance specialist retailers.

Retailers are embracing “phygital” strategies to communicate with their customers who might toggle between in-store and online shopping. While mobile shopping continues to rise, customers also use their mobile devices to enhance in-store shopping experiences.

The consumer electronics industry in Latin America will continue to record growth over the forecast period. Demand for laptops and LCD TVs continues to be robust. Manufacturers continue to invest heavily in development, which has helped the ageing LCD technology compete with emerging display technologies like OLED and microLED.

A major growth driver in 2020 was strong demand for headphones, in particular “true wireless stereo” (TWS) earbuds. Laptops sales will also continue to grow as the post-pandemic world shifts to hybrid workspaces (home and office).

Tracking Sustainability Claims: Where to Play and How to Win

Prioritising Experience: The Experience More Megatrend and the Future of Payments

Consumers demand experiences, a reality which has spread not just to the products and services they buy, but also to the purchase transaction itself. This…