Over the next decade, tier II cities in India are predicted to see exponential growth, opening up new opportunities for food manufacturers. The increased penetration of e-grocery companies and consumers’ changing perception of health has resulted in easier product adoption and consumption not only in tier I cities, but also in tier II cities across India. That said, as per Euromonitor International’s Indian cities survey – beta release, for companies to succeed, they will need to invest more in educating and building relationships with tier II consumers, who are equally brand-loyal in the current times as consumers based in tier I cities.

A sneak peek into consumers’ spending in tier II cities 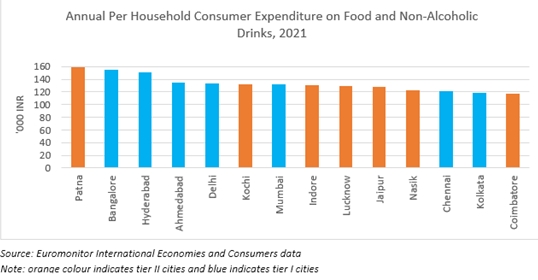 Unlike a couple of years ago, online shopping is no longer restricted to tier I cities. With an increase in the usage of digital offerings, a higher number of consumers have been experimenting with online shopping, which was further propelled by the pandemic. Euromonitor International’s Indian cities survey indicated that e-commerce is an equally important channel in tier II cities for grocery shopping as in tier I cities. 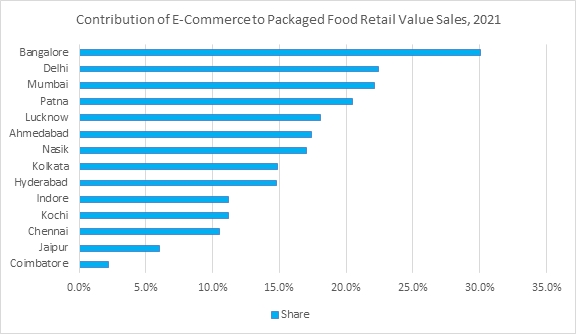 Apart from grocery e-commerce companies, several local, city-specific and regional companies are prominent in tier II cites. Local e-commerce companies such as Jai Bihar in Patna, Freshezy in Nagpur and Groci Store in Lucknow are a few examples. These local e-commerce companies give an opportunity for niche packaged food companies in particular to expand beyond tier I cities. They also allow companies to test out new products in smaller cities. Many specifically D2C and digital-focused companies have come into existence since 2020, especially in the health and wellness space, which has been a growing trend.

Also, a third of consumers surveyed across 14 cities were extremely willing to pay a premium for healthy foods, despite India being a price-sensitive market. This indicates opportunities for brands to premiumise their healthier food offerings across tier I and II cities.

While tier I cities continue to be strategically important and priority markets for leading companies, given their huge disposable incomes and high populations in India, food manufacturers must explore the growing opportunities in tier II cities as the adoption of different packaged food categories increases. Companies should understand the health benefits consumers seek from each food category and align their products to better serve consumers, although health claims including organic and all-natural are popular across all packaged food categories.

For more insights on consumers' preferences towards packaged food across all Indian cities, check out the full report here. We currently have an exclusive 10% discount on this report. To activate, simply enter CITESIND22 when checking out.