Valued at USD27.1 billion in 2021, Asia Pacific is one of the most dynamic regions in pet care in terms of growth, recording an 11.8% CAGR over the review period (2016-2021). This performance is primarily due to the significant growth in the cat and dog population. While Asia Pacific already stands out as the largest market for the cat and dog population, its growth is also the highest among other regions, increasing by a 7.4% CAGR over the same period.

Cats in particular are gaining in popularity over dogs due to rapid urbanisation and relatively smaller living spaces in the region. Cats require less space and are also relatively independent, making them a great fit for busy single- or dual-income households, who reside in small apartments or homes in urban areas. This is leading to a rapid expansion of cat food, which increased from a 22% to a 32% share of total pet care sales over the review period. 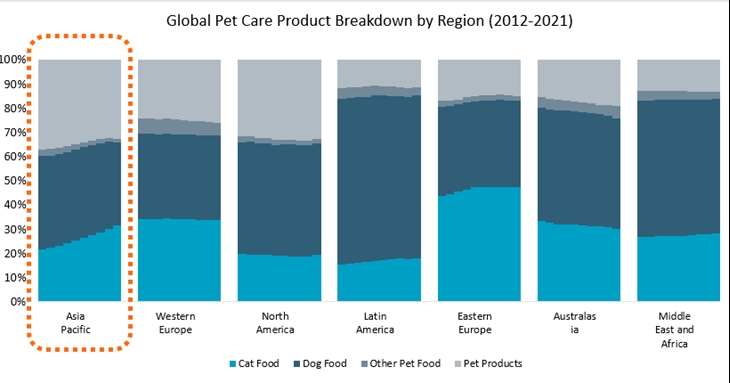 It is also worth noting that in addition to developing countries, developed countries are also rapidly expanding. While slower than developing countries such as China and Indonesia, which posted high double-digit CAGRs over the review period, all developed countries in Asia Pacific, except for Japan, such as South Korea and Hong Kong, are also recording high single-digit or low double-digit average growth rates. This trend is also contributing to the overall growth of the Asian pet care market.

Hong Kong records the highest per capita spend within Asia Pacific for pet care. Markets in the region with similar dynamics and attitudes towards pets, such as Taiwan, Japan and Singapore, are trailing by comparison.

Hong Kong and Singapore have a similar number of pets per household at around 0.5, but Hong Kong is witnessing a significantly higher per capita spend, almost six times that of Singapore. The share of premium dog and cat food is close to 75%, whereas it is only around 55-60% for Japan, Taiwan and Singapore; highlighting the appetite for premium food and products in Hong Kong.

Neighbouring countries such as Japan and Taiwan both have a higher number of pets per household compared to Hong Kong at around one per household, yet their per capita spend is approximately half that of Hong Kong’s. The difference is due to the proportion of the dog and cat population in these markets. The bigger dog and cat population helps to drive premiumisation in the market, as owners become increasingly sophisticated in their search for pet care products due to the rising humanisation trend, especially for dogs and cats.

Analysing the types of pets owned per household, Hong Kong, Japan and Taiwan have similar dog and cat populations to household ratio, whereas Singapore is significantly lower. Singapore lags behind in terms of dog and cat ownership per household, with a higher share of other pet types which require lower maintenance, such as fish and small mammals, explaining the large gap in per capita spending compared to the top three markets.

Other than day-to-day pet care involving food and hygiene, consumers in Hong Kong are keen to improve the overall life experience of their pets. This is evident in the rising popularity of premium experiences and services such as luxury pet staycations at Mandarin Oriental, Ritz-Carlton and Rosewood in the city. Pet care in Hong Kong is now moving towards an ultra-premium positioning compared to other markets in Asia Pacific.

Furthermore, pet owners in Hong Kong are not willing to sacrifice the quality of pet food and healthcare products they purchase, even during tough economic times. They have more money to spend on their pets while travelling overseas is not easy during the pandemic, explaining the resilience of the pet care market in Hong Kong in 2022, with double-digit growth. Enhanced awareness of health and wellness allows pet parents to project what they regard as beneficial to themselves onto their pets due to the humanisation trend, resulting in strong growth for pet healthcare in 2022, especially for supplements.

Almost 80% of Hong Kong respondents take supplements at least once a month, according to Euromonitor International’s Voice of the Consumer: Lifestyle Survey in 2022. Pet owners started buying supplements for their pets as part of their diets to improve the wellbeing and enhance their longevity and immunity. In response to the local appetite for pet supplements, an increasing number of supplement players are entering the market, including PAW by Blackmores and Petural by Watson’s Petmacy, together with the rising popularity of existing players such as ProVet and FAVOUR, which are enjoying expanding distribution.

How Inflation is Impacting Pet Food Products in Europe

After surface care sales spiked in Latin America in 2020 due to the pandemic, growth slowed in 2021, before slipping into decline in 2022, albeit remaining at…

Laundry care continued to record positive, if relatively modest, growth in 2022. Liquid detergents are generally taking sales from powder detergents across the…