Retailers around the world have seen their operations disrupted in 2020 initially by the pandemic and increasingly by recession in many markets. Euromonitor International’s Retailing Voice of the Industry, fielded in July 2020, identifies how retailers are responding to these events and how they are thinking about future investments during this unusual time.

Shopper behaviour is shifting not only as consumers prioritise safety in their shopping, but as a result of uncertain economic outlooks in many markets. Many major economies are expected to experience a recession in 2020. Concerns about employment prospects will drive consumers to be more cautious in their spending.

How do you expect shopper behaviour in your market will be affected by an economic recession? 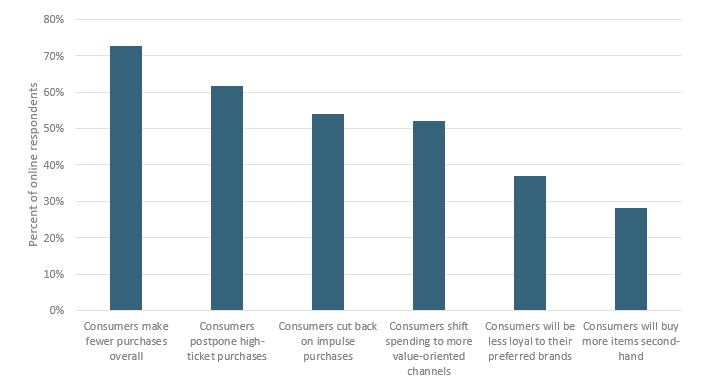 Retailers are already thinking about how to adapt their strategies to continue to draw shoppers even as consumers become more reluctant to spend. Two of the most frequently cited actions respondents expect to see their companies take to reach consumers during the recession have to do with better connecting with individual shoppers, via more personalised marketing (54%) and adding perks for loyalty program members (45%).

Retailers broadly expect to see consumers shift more of their spending towards value-oriented channels (52%). This is precisely what happened during the Global Financial Crisis in 2008 and subsequent recovery: While store-based retail sales in the US grew 7% between 2008 and 2012 according to Euromonitor, sales at discounters like Aldi increased by 28% and at various stores such as Dollar Tree by 29%. Discounters and variety stores are likely to see sales growth above the market average in the near-term as consumers seek to stretch their spending further as the economic effects of the pandemic become more widely felt.

Retail stores will look different after the pandemic

Since January, retailers worldwide have introduced new policies and measures to make their stores safe for shoppers and associates. Many of these measures will likely be eliminated post-pandemic – for example, of the 58% of respondents who indicate they currently take employee temperatures, slightly over half expect to stop doing so in the next 6 to 12 months.

Perhaps the sharpest shift has taken place within e-commerce. A full 87% of global respondents indicate that consumers are shopping online more frequently than they did prior to the COVID-19 pandemic. Of this group, 73% expect this will be a permanent feature of shopper behaviour even once the pandemic is past. This has important implications for what measures retailers adopt and promote in the near-term, as retailers are seeking to prioritise investments that will pay off even after the pandemic.

Which of the following do you think are the most likely effects of the COVID-19 pandemic on your company's sales and operations in the next 6 months? 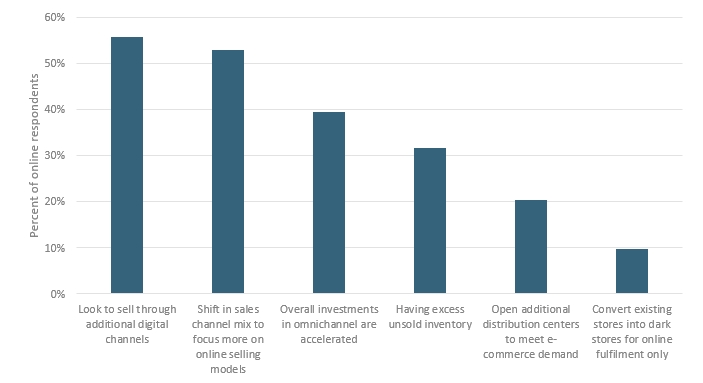 For example, 40% of retailers expect to see their company add more online services, such as online styling and virtual try-on, in the next 6-12 months. The growing role of e-commerce has also led many retailers to accelerate planned investments in a variety of omnichannel features. 31% of retailers that do not currently offer the ability for consumers to buy items via transaction social commerce sites (such as Instagram Shopping) are planning to accelerate investments into this, along with 28% who plan to accelerate investments in the ability to offer shoppers the option to access their profile across stores and digital channels. A full 56% of retailer respondents indicate that their companies are seeking to sell through additional digital channels, such as through more marketplaces.

Technology will be the key factor for addressing new consumer behaviour

Economic conditions are cyclical, and so too are consumer responses to economic change. In the months ahead as consumers contend with the economic consequences of the pandemic, many retailers will turn to a mix of strategies reminiscent of previous financial crises as well as using new technologies around personalisation and digital offerings to reach shoppers. In the face of both economic challenges, as well as the public safety components of the pandemic, technology will be crucial.

In particular, retailers will look to go beyond viewing omnichannel as the combination of stores, a website, and an app, and instead view omnichannel increasingly as the suite of ways a consumer can engage with their brand in both brand-owned and non-brand-owned contexts.

These Five Digital Trends Are Changing Commerce This Year

During 2021, global retailing sales rebounded to surpass pre-pandemic levels buoyed by the expansion of e-commerce. While store-based sales saw recovery with…

Retailers are pushing the boundaries of innovation. Euromonitor International’s annual New Concepts in Retail report highlights how these efforts are reshaping…

Despite the growth of modern channels, informal retail channels continue to reflect the typical shopping habits of a large proportion of consumers across all…