The coming years will see a key sustainable packaging trend continue to develop in Southeast Asia, in the form of a growing market for 100% recycled PET (rPET). PET bottles currently account for around 45% of soft drinks packaging unit volume in Southeast Asia in 2020, although it is expected to contribute 75% of packaging unit volume growth by 2025, driven by its key application of bottled water, which is set to benefit from increased health-consciousness and a need for hygienic forms of hydration, particularly as all Southeast Asian nations except for Singapore have a lack of potable tap water. The sheer volume of PET bottles in soft drinks makes finding sustainable alternatives to its use in virgin material form a key priority among beverage players. Recycling resin content to 100% rPET is becoming widely accepted as a more sustainable alternative to using virgin PET bottles, as many global beverage giants include 100% rPET packaging among their mid-to-long-term sustainability goals. 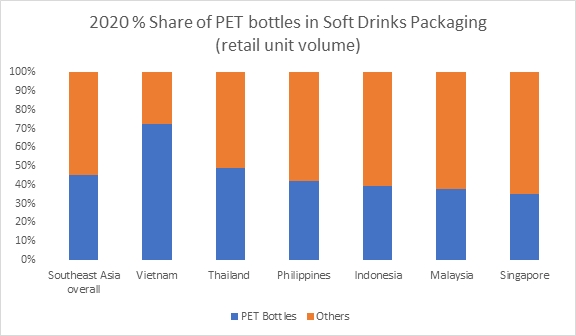 In Western Europe, Coca-Cola bottles its entire portfolio of locally produced beverage brands in Sweden, the Netherlands and Norway with 100% rPET, while PepsiCo has targeted to sell only 100% rPET for its Pepsi brand in nine European countries by 2022. Europe’s generally robust legislation, which includes targeting increased use of recycled plastic content over virgin materials, and stronger recycling infrastructure, relative to Southeast Asia, supports the development of sustainable packaging, making it an ideal testbed for sustainable packaging innovation and trends, which can then be replicated in other regions, such as Southeast Asia.

The increased prominence of sustainable packaging types such as 100% rPET in the Southeast Asian region is spearheaded by global companies. For example, in Indonesia, Danone first developed 100% rPET for its Aqua bottled water brand at the end of 2018. It is heartening to see that local players have followed Danone’s trail, with PT Sariguna Primatirta launching the 100% rPET Cleo EcoBin bottled water brand in late 2020. The introduction of 100% rPET by other global players like Coca-Cola in the Philippines since 2019 is expected to continue spurring more innovation and development of 100% rPET packaging, as brands increasingly compete for the hearts and minds of consumers through a sustainability positioning.

However, Southeast Asia may still find it difficult to match the scale of 100% rPET prominence in Western Europe. Legislation such as the existing ban on food and beverage packaging in rPET has proved to be a hurdle in markets like Thailand, while the quantity and quality of recycling infrastructure in the region still has important room for improvement. In addition, the largely developing region of Southeast Asia has a lower disposable income than Western Europe, contributing to greater cost-consciousness among Southeast Asian consumers. Should there be higher material prices for rPET, relative to virgin plastic, this could prove an additional challenge to local packaging and beverage manufacturers, as it would be difficult to pass on cost increases to consumers.

Nevertheless, a growing manufacturer focus on the environmental aspect of sustainable packaging coupled with a need to appeal to an increasing pro-sustainability millennial and generation Z consumer base provides a sufficient push towards ensuring a greater prominence of sustainable packaging such as rPET in the Southeast Asian region moving forward.

The briefing examines how the rubber and plastic industry is performing globally and in the largest countries in terms of output. The report provides data for…