The global population is living longer. Global life expectancy has been climbing, from 65 years in 1990 to 72 in 2020, and is expected to reach 76 years by 2040. In 2021, the citizens of Monaco, Hong Kong, Macau and Japan were longevity champions, facing lifespans of 85 years or more, while Singapore, Switzerland and South Korea were not far behind. Longer lives have numerous implications and establish the longevity economy – a phenomenon no business can or should ignore.

Although the longevity economy encompasses all consumers aged 50 and over, the group aged 65+, more broadly labelled the elderly, is expected to be the most dynamic cohort, growing by 75% over 2021-2040. In developed countries, in 2021 this age cohort was the major contributor (17% of the total) to the highest social classes, A and B, or the population earning more than 150% of the average gross income, and this figure is expected to increase to 23% by 2040. On the other hand, significantly lower purchasing power is possessed by the elderly in emerging and developing markets (8% of the social classes A and B in 2021 and 13% in 2040). Yet, the undeniable truth is that global businesses have a challenge and opportunity to cater to this group of consumers, which is diverse in terms of finance, but seemingly homogeneous in terms of needs. 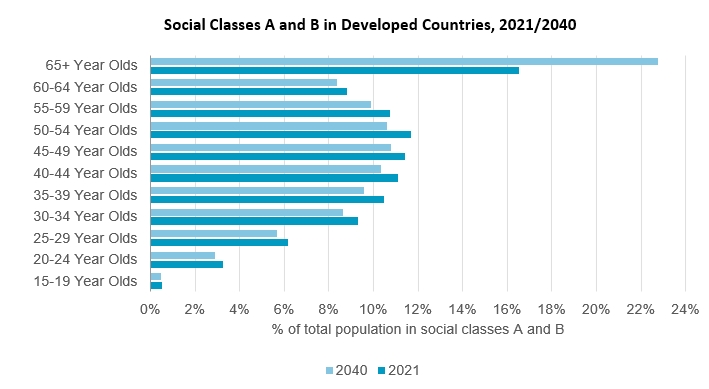 Although health remains the top interest amongst silver consumers, other needs and wants of the ageing population are also becoming more evident. Seniors are active, and seek to continue enjoying their ordinary lives as much as possible for as long as possible. This means higher digital adoption and increasing rewiring instead of retiring. This article briefly describes the three top areas in which there are longevity opportunities: health, digital adoption and representation, and work-life rewiring.

Physical and mental health at the forefront

Healthy life expectancy, in absolute terms, is increasing slower than longevity. The difference between the two in 2021 was nine years globally, while in terms of countries, Australia and the US faced the widest gap of 12 years. In Chad and Somalia, the difference was around seven years. Living standards and modern medicine play critical roles in living and staying healthier for longer. Yet wellness and the wish to stay active and independent are the major drivers for growing demand for healthcare products and services for the elderly.

According to Euromonitor International’s Voice of the Consumer: Health and Nutrition survey in 2022, 60% of global respondents aged 60+ selected having a healthy immune system and the absence of disease as being primary definitions of health, emphasising the high importance of preventative healthcare. More interestingly, more than 65% of silver respondents said mental wellbeing is a definition of health. As an illustration of this, wellness apps tailored to seniors and combining physical and mental health are growing in popularity. Senior Fitness, Tai Chi Fit Over 50, Yoga|Down Dog and many others are striving to keep body and mind intact, irrespective of age.

Becoming digitally literate is an essential milestone for the elderly. As the pandemic and its containment measures pushed everybody online, the silver generation became the most rapid adopter of technology. The proportion of the global silver population without access to the internet has been consistently declining. In 2021, only 1.5% of silver respondents to the Euromonitor International Digital survey globally did not have access to the internet. 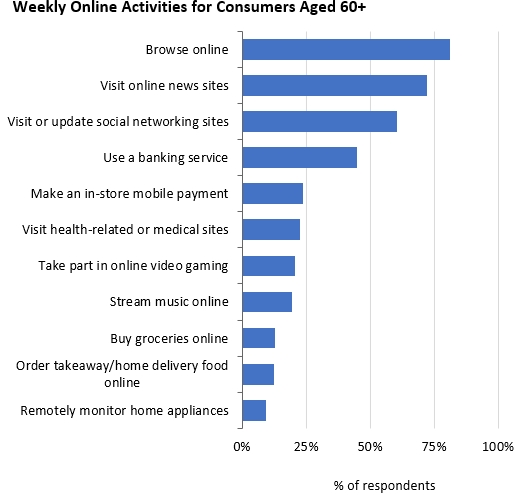 In general, seniors are becoming more comfortable with online activities. 82% of consumers aged 60+ were already browsing online weekly in 2021, 72% were reading news on digital platforms, and over 60% of consumers aged 60+ visited a social networking website at least once a week. Yet, despite growing, the representation of seniors in the media is still marginal, leaving many consumers feeling ignored and excluded. One of the positive inclusion examples is South Korean pop culture. In recent years, South Korean entertainment companies released well-known TV shows such as “Grandpas over Flowers”, “The Chilgok Gashinas”, and “Squid Game”, featuring elderly stars and prompting the “active seniors” and “grey crush” trends. Shows and other entertainment services aimed at older consumers are expected to better engage the silver population and improve their inclusivity, mental health and sense of belonging.

Self-fulfilment and rewiring instead of retiring

Living longer means working longer for many in the silver population. According to Euromonitor International’s Voice of the Consumer: Lifestyles survey in 2022, only 16% of respondents globally planned to retire before the typical retirement age, with the proportion changing marginally over the last five years. Amongst the top work priorities, the senior population emphasised having a job that allows for a strong work/life balance (29% of all 60+ respondents selected).

So, instead of retiring, an increasing number of seniors are choosing rewiring – reallocating time. Staying at an established career but cutting down on work hours, taking up a new professional endeavour, learning a skill or two, or engaging in a new and captivating hobby can help seniors to retain their professional identity. For example, olderpreneurship, or entrepreneurship by the over 50s, is being supported by an increasing number of organisations, such as the Prince’s Initiative for Mature Enterprise in the UK, occupying and giving the elderly purpose.

Although the senior population is one of the largest age groups, many B2C companies do not have a strategy to target/serve these consumers. Traditionally, health remains the primary concern with ageing, but the needs and wants of silver citizens are expanding to encompass more active and fulfilling lifestyles. A growing digital presence and feeling included in modern media are important factors to cater to seniors. However, helping seniors to stay engaged with the surrounding world and acknowledging their importance to society underpin the genuine opportunities in serving the elderly.

More information and further insight on the New Consumer Landscape can be found here.

Understanding the Southeast Asian Consumer in 2022

Over the near term, mounting inflationary pressure is set to limit purchasing power of the European population and curb discretionary spending growth. In the…

Income and Expenditure in Middle East and Africa

After decades of low inflation, economies, companies and consumers worldwide struggle to cope with the surging cost-of-living crisis. While the costs are…