This article originally published in Forbes.

Products that have been somewhat insulated from the rising tide of e-commerce are seeing an uptick in online orders. Grocery e-commerce hit record highs in recent years. Even so, popular categories such as staple foods, fresh foods and soft drinks have the greatest unmet e-commerce opportunity globally, according to Euromonitor International.

However, slow shipping is holding back the full potential of these categories. Connected consumers point to longer than expected wait times as the most common delivery challenge, according to Euromonitor’s latest Voice of the Consumer: Digital survey.

Going forward, reducing this window, especially for food and beverage orders, will be critical to power e-commerce growth. And, while headlines have focused on quick commerce players and their VC-backed pocketbooks, large retailers such as Walmart should not be counted out.

Battle for the last mile

Winning the last mile has been a top retail trend for the past decade, as the industry grapples with rising fulfilment costs, as well as the environmental impact of such services. Different business models have appeared to meet these evolving needs.

However, deliveries were still taking an hour or more, which laid the groundwork for ultrafast models. Start-ups burst onto the scene, with some promising orders in as little as 10 minutes. Weezy, Gorillas, Getir, Cajoo and gopuff received a windfall of venture capital over the last couple years. These companies own and operate distribution centres close to end-consumers to shorten delivery windows.

Competition in the on-demand delivery space is fierce, but the short-term outlook continues to worsen. The stage is set for an intense round of consolidation, as larger, better-financed players snap up their smaller rivals or force them out of business. In the US, for example, the top three third-party delivery players across retail and foodservice control almost 90% of the market, according to Euromonitor, up from 40% in 2017. 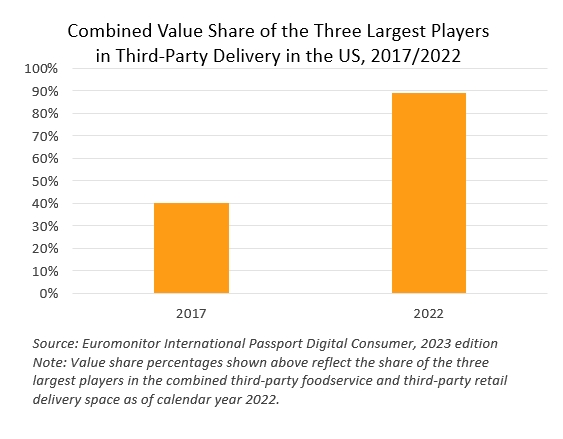 Takeovers are perhaps most evident within the quick commerce market. Turkish brand Getir is one example. In early October, Bloomberg reported that Getir was in advanced talks to buy rival Berlin-based Gorillas to expand in Europe. However, this was not a new page in the company’s playbook. In 2021, Getir acquired Spanish player Blok and UK player Weezy to build its European footprint.

While the viability of such models remains up for debate, some of the world’s largest retailers are not sitting on the sidelines. These companies have the resources and financial backing to potentially win. Walmart is at the forefront of this movement in the US.

Walmart sold USD7.3 billion of staple foods, fresh foods and soft drinks online through the first three quarters of the year, according to Euromonitor, capturing 30% of the US e-commerce market for these categories. To compare, Kroger and Amazon sold USD3.4 billion and USD1.8 billion, respectively. Walmart holds a unique advantage over Amazon and other competitors: a vast store footprint. With 4,700 locations, 90% of the US population is within 10 minutes of a store. Walmart is able to reach both high-density urban areas as well as more suburban and rural parts of the country. The retail giant has also opened fulfilment centres and invested in automation across its supply chain to increase speed of operations.

Big merchants such as Walmart also have deep pockets to build proprietary delivery infrastructure. In fact, one of Walmart’s more notable moves was pivoting its same-day logistics network into a new revenue stream. In 2018, Walmart launched Spark, a service that uses independent contractors to pick up orders from US stores for same-day delivery. In 2021, these capabilities turned into a service called GoLocal, which now partners with US retailers of all sizes to offer delivery in as little as 30 minutes.

Walmart is positioned to make fast delivery a reality at mass scale – an achievement that delivery platforms have struggled to do profitably. The primary purpose of Walmart’s stores remains in-person shopping, so it does not have the added real estate costs, unlike its quick commerce competitors.

Stores also serve as nodes across a complex distribution network, enabling both delivery and even collection options. Walmart reports about a quarter of e-commerce orders are fulfilled through click-and-collect, which offsets the more costly delivery model. In the US, click-and-collect services continue to outpace the growth of delivery as a fulfilment model, according to Euromonitor.

Unlocking e-commerce growth for impulse-driven categories is one of many structural shifts unfolding in retail. As delivery windows shrink, consumers could turn to the online channel to shop in the moment, which will open the door to new ways of selling and marketing. Walmart is the closest to making this a reality for the American shopper.

Read more about the issues impacting on-demand delivery in our report, Digital Disruptors: The Global Competitive Landscape of Delivery Platforms.

Top Consumer Trends That Will Change Retail In The Year Ahead