In June of 2016, Chile officially implemented its Food Labelling and Advertising law, which was the first national regulation to jointly mandate front-of-package warning labels, prohibit any type of marketing at children, and ban sales in schools of all foods and beverages that exceeded set thresholds of calories or added sugars, sodium or saturated fats.

In doing so, the country became an excellent natural experiment for evaluating the success (and shortcomings) of “legislation creep” – government regulation that is aimed at mitigating obesity and preventable diseases such as heart disease, lung cancer and diabetes, all of which are increasingly common within Chile and Latin America.

Reducing sugar consumption is one of the biggest public health challenges of the new decade, with sugar-sweetened drinks a key legislative target. In the top per capita soft drinks markets of the US, Mexico, Argentina and Chile, almost a third of total sugar consumed comes from soft drinks. 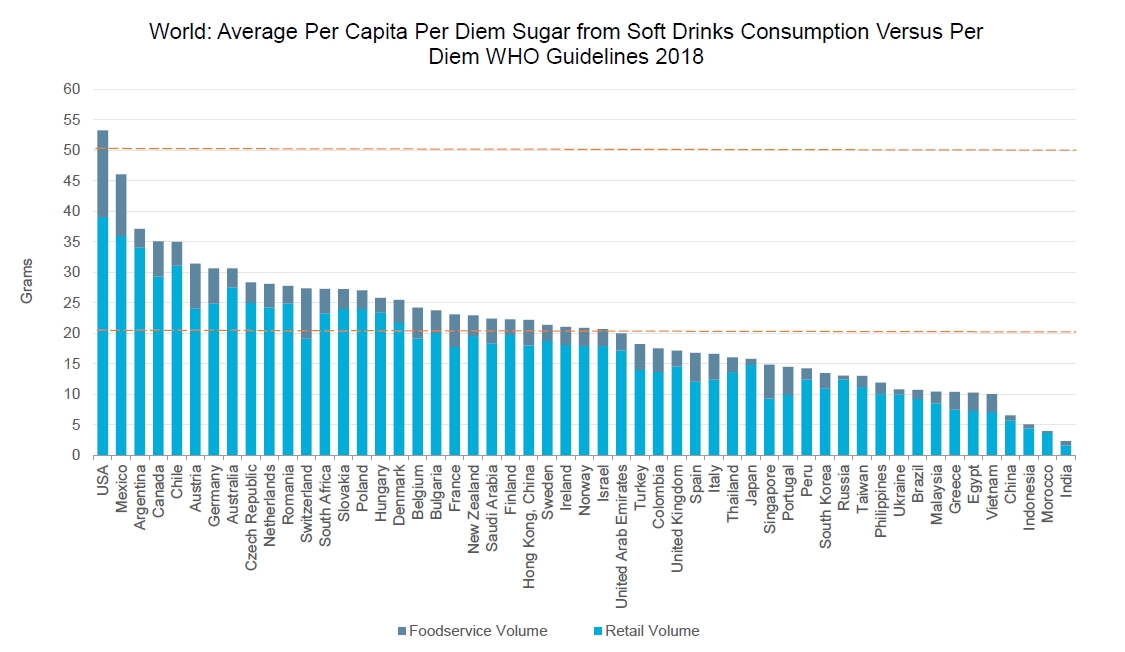 Similarly, “high in sugar” energy drinks (eg Monster, Red Bull) have seen unabated growth, with a 27.8% increase in per capita consumption since the implementation of the law. We must also highlight that Chile still has the highest per capita consumption of carbonates in the world. In 2019, each Chilean consumer drank on average 323 cans (350ml) of “high in sugar” cola carbonates.

The effect of the Chilean law is not sustainable over time and we expect that in the absence of another “shock” to the market, that “high in sugar” cola carbonates will continue to grow, surpassing the per capita consumption rates pre-labeling law within five years.

This does not mean that the labeling law was not effective, rather it means that government and health organizations need to be discussing next steps and the role of this type of legislation in changing habits and patterns of consumption in the long term.

However, with governments scrambling to fight both a sanitary crisis and an economic crisis, legislation targeting specific consumer goods like sugary drinks or tobacco will undoubtedly decrease in priority. However, for a consumer increasingly concerned about their own health, products aimed at preventive health measures will become more top of mind. Carbonates and other drinks with reduced sugar or fortify/functional options are also set to capitalize on this trend.

How to accelerate this process is something that is not answered with a single measure if not a set of actions that include everyone involved. What about sugar taxes then? Direct excise taxes on sugar-sweetened drinks and/or increases on the rate of ad valorem taxation levied on SSBs has been a popular strategy of global governments aiming to disincentivise consumption through higher retail prices and incentivise producers to introduce alternative sugar-free products.

A recent history of SSB taxes in Latin American market includes an IEPS tax first launched in Mexico in 2014, of MXN1 per litre. Chile implemented a sugar tax of 18% on sugar-sweetened drinks the same year. Peru levied an SSB tax of 25% on sugar-sweetened drinks in 2018. The World Health Organization has concluded that an increase of 20% or more in the retail price of “harmful products” could lead to “proportional reductions in consumption”. In the case of Chile, consumer habits were not significantly curbed because of the 18% tax.