In July 2022, Euromonitor International launched the 2022 EV Readiness Index. The index evaluates electric vehicle preparedness in 37 countries across 20 data points within four pillars: market maturity, income and spending factors, infrastructure factors and incentive factors. The latter has been shown to be one of the most important factors in spurring EV growth through subsidies, tax breaks and other perks. However, as market maturity rates of EVs rise, some governments are cutting back on incentives due to fiscal imbalances. This could discourage EV adoption in the near term, especially as soaring inflation rates in 2022 make EVs more difficult for consumers and businesses to afford.

Incentive programmes have been crucial to getting EVs off the ground with purchase subsidies, value added tax (VAT) cuts, car registration tax relief, free parking and other perks. The higher costs associated with EVs have often lent the sector premium status and thus a discouraging factor to purchase, with consumers instead opting for a more affordable fossil fuel-powered vehicle. Financial incentives have thus helped cushion some of the higher costs associated with EVs while promoting low carbon mobility and helping governments achieve sustainability targets.

Norway, Austria, and the UK have set the standard in providing EV incentives, and this has helped these countries achieve the top three rankings in the 2022 EV Readiness Index. Norway has been a poster child for EV incentives since the EV boom at the end of the previous decade. Despite not offering a purchase subsidy, the country promoted new EV sales through a 25% VAT exemption, removal of the road, nitrogen oxide and weight taxes, while simultaneously maintaining all taxes on traditional fossil fuel-powered vehicles which include a carbon dioxide tax. This made electric vehicles cheaper than fossil fuel vehicles, and, in turn, incentivised purchases. In 2021, 93% of all new passenger car registrations were either electric or hybrids in Norway – the highest of any country among major economies and this can be partly attributed to the generous provision of incentives. 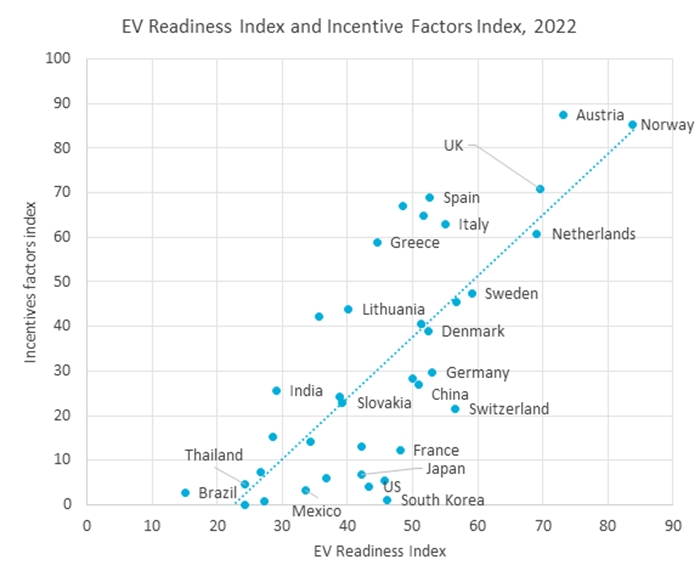 While EV adoption rates continue to rise, the threat of governments cutting back on subsidies is real. China has continually reduced the size of its subsidies since 2017, while simultaneously authorising stricter regulatory control based on technical specifications, with more advanced EVs enjoying larger subsidies.

Germany is planning to gradually reduce EV subsidies for battery electric vehicles (BEVs) between 2023-2025, while incentives for plug-in hybrid electric vehicles (PHEVs) are likely to cease at the end of 2022. Other countries such as the UK and Norway are similarly following this path, highlighting rising market maturity and the large provision of affordable EVs. Norway’s government has cited a fiscal hole amounting to USD2.3 billion, which has been largely attributed to falling tax revenues from car purchases as EVs were largely exempt.

Rising inflation is pricing consumers out of EVs

However, rising inflation in 2022 has strengthened the argument against the removal or reduction of EV incentives, at least in the short to medium term. In 2022, annual global inflation is expected to reach 6.8% - the highest level since 2008. Rising raw material and labour costs are making electric vehicles more expensive and less accessible to mid- and lower-income households.

According to the auto car shopping guide, Edmunds.com, the average new EV car costs USD61,000 globally in 2022 compared with USD46,000 for all new cars irrespective of fuel type. With many households already priced out of buying a new car, the prospect of purchasing an EV is out of the question. It has resulted in the Chief Executive Officers (CEOs) of General Motors, Ford, Toyota and Stellantis writing to Congress to extend the current USD7,500 federal tax credit in the US, which is permitted to only 200,000 vehicle sales per automaker.

EV incentives have played a major role in encouraging consumers to make the transition away from fossil fuel-powered vehicles. However, with some countries beginning to limit EV subsidies and other incentives at a time when inflation is surging, EV uptake could slow down in the near term. This could be a problem for governments that are pushing to meet sustainability targets in the transport sector.